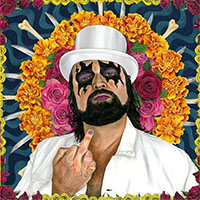 So for all you impatient people, here’s the rub: “Egomania” is more metal than punk - and by metal I mean the spandex and permed hair kind, as heard on the Sunset Strip circa 1986. Our Dimboola correspondent, Ron Brown, pegged it in one when he said it sounded just like Motley Crew.

As befits its title, "Egomania" is highly produced - no doubt with an ear to European radio - and the playing is slicker than a dophin's dick in breeding season. On the other hand, a track like “Too High” (an ode to getting fucked up - I guess L Ron Hubbard hasn’t taken all the hedonist out of the boy) sounds like speedcore with a smudged  overlay of grit - before flashy lead guitarist Cat Casino punches in a Steve Van solo.

Some of the traits of Turbonegro’s best records are here bit it's a little too well rendred. The title track leads off with an esoteric introduction before slipping into a singalong that could have been at home on “Apocalypse Dudes”. The strutting “Blood” is up there too - in a metallic way. A couple of others sound like contemporary Alice Cooper. Take that any way you like.

There’s no faux homo here despite a song title like “Bum To Bum”. Hank clearly isn’t out to antagonise - he’s here to sell records.

The most arranged tune (among quite a few) is the Spaghetti Western-tinged “Adios (Where’s My Sombrero)” that sounds like a farewell to his Hank’s former self. Measured power chords yield to choppy riffs  He might be a class clown but the man has depth.  In the end, it's Hank's personality that lifts the record. All the buffing and polishing can't wipe that out.