.​.​.​For the Worms - All The Weathers (Rough Skies Records) 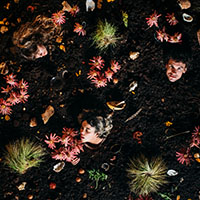 2019 is shaping up to be a real terror of a year. Parts of Australia are in the middle of a housing, job and health support crisis and the shit has well and truly hit the fan.

Heads of police are on trial for brutality, while politicians are dragging their feet on whether or not trans people have a right to exist.  Bodybuilders are shooting up strip clubs and a massive methamphetamine epidemic is destroying the lives of vulnerable young people.

Young men with schizophrenia are firebombing punk squats while teaching staff and metro workers are routinely striking, grinding workplaces and services to a halt.  On the street, there are hundreds of young people facing homelessness, violence, unemployment and lack of future prospects.  To them, the future is bleak.

Despite all this, there are dozens of vibrant young artists creating challenging and unique works that directly tackle the horrendous and wretched world we find ourselves in.  One of those bands is Fern Tree, Tasmania, iconoclasts All The Weathers.

A fiercely inventive band with an ever changing musical sound, ATW have come together for their sophomore effort “For The Worms”.

They describe themselves tongue-in-cheek as “kooky post punks” but I think that's not giving them enough credit.

A post-punk masterclass in unique and pleasantly angular guitar work, funky and driving bass lines and powerful incessant drumming that sometimes likes to come close to motorik before careening down a ravine into pure punk trash.

Each member takes a turn on each other's respective instruments, which makes for three bands-in-one, in a sense.  Everyone has a different playing style and it emphasises the unique qualities of each song.  I wish I was able to create half of what they can.

The lyrics veer between wholesome rhymes and putrid bile, from 'you know smart phones make me look dumb' to impassioned readings from the anarchist manifesto about the black war and the desecration of Truganini's world.

It's an album that tackles a lot of cumbersome and disparate topics, yet is able to strike a balance between challenging and gratifying.

“1234” has this beautiful call and response between Georgia and Callum, alternating between wholesome and vicious.  It reminds me of a volatile conversation where there is a clear power dynamic between the two people, yet it is able to work together to achieve a singular, stunning piece of work.

“Borders” is a powerful work, thundering out from the start with an impressive riff and ,that always sticks with me.

Throughout my listens while walking through the bush, certain lines will continually resonate with me.

“If home is where the heart is, does that just make me heartless?”

That's something that means a lot to me as someone who has faced homelessness multiple times now.

ATW also refers a lot to the unique landscape and colonial history of lutruwita, resulting in narratives that can only come from this little island.

“BUT THE GREAT WALLS OF JERUSALEM ARE BURNING ALIVE!”

The thing that makes this album so important to me is its inherent Tasmanian quality and its ability to enable the listener to project their own experiences and perspectives that are rarely seen in other songs.

Nipaluna is the tradtional name of the country in which the city of Hobart sits. I think the Nipaluna Sound is a unique and important sound for musicians to be creating and exploring, I eagerly look forward to other bands making works that meditate on this theme.

My only criticism of the album is that the vocals are sometimes mixed down and it becomes difficult to understand over the din of the band making one hell of a whirling racket, but as a sound engineer I understand those challenges.

This album was recorded up the road from my little valley of Turnip Fields in the Fern Tree Arts Hall (“rhymes with asshole”) and the sound reflects that.  This isn't a polished studio record, this is a record crafted by three ridiculously talented people in a space that they converted into a studio. The rough around the edges sound gives it an urgency and an authenticity that is sorely missing from our current musical climate (smoko anyone?)

I'd characterise this album as a warm soothing cup of Earl Grey after a 2am walk in the bush to get home.  Soothing my shredded vocals from howling karaoke and partying all night. Fresh and hot, and good for the soul.

If this has piqued your interest, I'd recommend perusing Rough Skies Records for examples of other stunning music coming from Nipaluna. If you're looking for other complimentary bands to listen to, you're gonna have to come down to the Brissie (that’d be Hobart’s Brisbane Hotel) on a Saturday night.

Tags: all the weathers, hobart, tasmania, for all the worms , rough skies records