Written by Robert Brokenmouth on 01 April 2019. 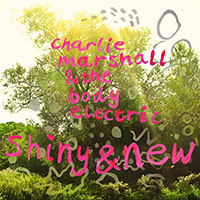 "Shiny and New" feels a bit like 1960s soul, but mostly it just sounds fresh, bright and modern (ably assisted in this with a panoply of 'side-musicians', such as Jack Howard on trumpet and James Macaulay on trombone). The other personnel are Bryan Colechin, bass; Brett Poliness, drums; Andrew Watson, violin and synth; Kofi Kunkpe, percussion; Louie Marshall, piano; and Gus McMillan, flute.

"Shiny and New" is a rich, satisfying record, which I've played in the car several times and at home to general acclaim, where it ranks alongside Shifting Sands' "Crystal Cuts", another superb Australian release.

But that's not all. Marshall must be a hell of an interesting teacher (ED: Yes, that's his day job); his songs often contain aspects of the world around us which, through his lens, essentially beckon us to tune in, turn on, and drop in... and you can pretty much drop in anywhere. Almost every track here you can imagine turning up on mainstream radio, TV ads, movie soundtracks. There's a stone sense of groove wrapped in lush marshmallow.

There are two longish tracks; "Speak Truth to Power", the most beautiful, soaring song you could ever imagine - and it's profoundly, simply, political. Gorgeous... it's followed by an absolutely gobsmacking track though; "Blood on My Hands"... Marshall's sense of timing and range of vocal expression comes into its own here.

"Blood on My Hands", the lynchpin and pulsing heart of the LP, slowly builds into a vast marauding behemoth, instruments coalescing like speedboats cruising on the bay ... in fact, 'Blood on My Hands' is worth the price of admission to 'Shiny and New' all on its own.

Get your wallet out. But first, a mini-interview:

Charlie Marshall: Definitely. I only learnt to play guitar shortly before starting Harem Scarem in about 1981. We were inspired by post punk and pre punk (Velvets, Stooges, etc) and were very rudimentary at first.

The songwriting was very intuitive. It's always been pretty intuitive for me, there's no formula, so it's taken a while for me to get to now, where I feel like I finally have a really good handle on this thing...which is making music. I actually think I've progressed most in the last four years, since I started seriously playing live and recording again after having a bit of a break from it for a while.

I was getting frustrated before that 'cos I always felt like I had good ideas but sometimes couldn't bring them to fruition, felt I wasn't doing the ideas justice in the finished product. Mainly 'cos I wasn't a good enough band leader, or wasn't technically capable enough, or didn't have the production skills. I've always wanted to make my own distinctive sound and not just work in some well-explored genre where the process of what you need to do is pretty well known, so it's not really easy.

I think the real musical geniuses are the people who can just do all that stuff in an original way when they are very young, you know. So it's only recently that I feel like lots of things have just gelled in my head so I'm able to make the music I want to. Confidence coming from maturity and experience has a lot to do with it.

I-94 Bar: Second ... there's a few definite themes on "Shiny and New", and while I can make a couple of guesses it will sound a lot better if I ask ... what sparked this one?

CM: "Shiny and New" is about noticing, opening your eyes and mind, looking around, seeing beauty wherever it can be found - which is almost everywhere - in small things, in subtle things, in the light, in nature, in the landscape, sky, clouds, stars. In science, which is just what you do when you think about these things and wonder why they are the way they are.

It's one of the diseases of our times that some people are doing these things less and less so there's so some songs addressing the cost of this - the Marvin Gaye cover and my "protest" song "Speak Truth to Power".

It's about "Hope and Fear". We live in frightening times with much to fear but if we look around there's also things that are reassuring, like the workings of nature and the cycles we can see, and the great people we can meet. Blood on my hands is about the ultimate fear of losing touch with reality, it's inspired by things like that Robert Mitchum film of the evil Southern preacher with "Love" and "Hate" tattooed on his knuckles. Also inspired by one of my favourite books "The Third Policeman". Have you read it? Mind bogglingly good I reckon.

"Pass It On", "God Only Knows" and "Can You Feel It" are about the hope arising from deep connection.

I-94 Bar: Third... despite the world being a grottier place and Chris Wilson passing (among others) you sound extraordinarily optimistic... how?! Dear god, how?!

CM: Hope just manages to conquer fear! I find hope from - my two amazing kids who constantly inspire me, likewise my wife. We're lucky, we all inspire each other.

The young kids I teach in primary schools - I work all over Melbourne and even in the most butt-ugly, depressing suburbs the kids are still (mainly) bright and full of spark and curious to learn, and full of...joy really...it really is amazing. If seeing little kids like that doesn't give you hope then...you may as well give up, I guess! Admittedly I don't deal with them when they get older and things can get tougher.

But, yeah, a lot of it is because I truly believe "The kids are alright" to quote The Who. Like the School Strike For Climate last week. That was great! Go kids!

I-94 Bar: Fourth ... I almost don't dare ask about your 'roots' but there's clearly a natural progression here... what's going on?

CM: Harem Scarem - punk, post-punk and pre-punk - Velvets, Stooges, The Clash, The Fall, Joy Division - particularly The Stooges led us back to the blues - John Lee Hooker, Howlin' Wolf, the Stones - led to a major infatuation with Keef! - led to 60's and 70's soul - the Body Electric has always been a bit of Keef, Lou Reed, Dylan, guitar-y stuff like Neil Young and Dinosaur Jr, but always with a lot of soul - in recent years, as I've got better at making the music I want, the groove has got more and more important; so more soul and funky grooves that I wouldn't have been capable of before.

I've never liked straight rock ,with a straight beat. As Keef says it's got to be rock AND ROLL ... with the emphasis on the roll!