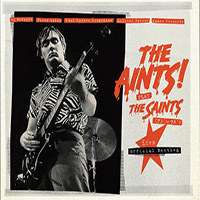 The wild abandon of youthful thrashing has been replaced by a measure of profesisonalism with a rhythm section more orthodox than the original band and a deal more powerful. Ed Kuepper’s droll vocal laconicism substitutes for the boozy drawl of Chris Bailey and if he lacks his onetime singer’s range, it’s no big deal.

This could have been just another live disc, a cash magnet for the punters on the next run of shows, but it's not. The killer apps - apart from those songs, of course - are the thoughtful brass arrangements of Eamon Dilworth (now credits as a full member) and the sonic enhancements of keyboardist Alister Spence.

You might get through an Aints! gig without hearing "(I'm) Stranded" with neither you or the band regretting it, but it's here and played with a shade more enthusiasm than on the past Saints reunion tour, even if Ed's patter makes it sseem like a chore.

The best stuff is the tuneage inlaid with brass. Drummer Paul Larsen's swing and the extra punch Dilworth and his brass buddies bring to bear kicks them into high gear."Swing For The Crime", "Know Your Product" and a nagging "Ostralia" throb with energy. "This Perfect Day" is the single that should have been a smash, had the Brits not been so caught up in fashion and fads.

Kuepper's razor-wire guitar is mixed up high here and underpins its attack. Of course the show-stopping closers, the intense "Nights in Venice" and "River Deep, Mountain High", put a lid on things on the live album, just as they do in the flesh.  Grab your copy at the Australian shows in June-July or go to the band's website. It's on vinyl and CD on June 14.