This is... TROATT and We Want Beer - Troatt (EC Productions) 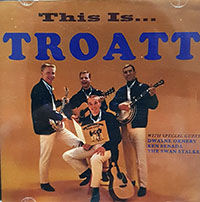 A few weeks back, The Barman used the term “avant-garde” to describe a rather unpleasant band from Adelaide.

Got me thinking. Twattypedia reckons “avant-garde” means "people or works that are experimental, radical, or unorthodox with respect to art, culture, or society. It may be characterised by nontraditional, aesthetic innovation and initial unacceptability, and it may offer a critique of the relationship between producer and consumer”.

Which I think is kind of bollocks. This is what the Tate (that's an art museum) (in London) (England) has to say;

"Avant-garde is originally a French term, meaning in English vanguard or advance guard (the part of an army that goes forward ahead of the rest). It first appeared with reference to art in France in the first half of the nineteenth century, and is usually credited to the influential thinker Henri de Saint-Simon, one of the forerunners of socialism. He believed in the social power of the arts and saw artists, alongside scientists and industrialists, as the leaders of a new society.

In 1825 he wrote: ‘We artists will serve you as an avant-garde, the power of the arts is most immediate: when we want to spread new ideas we inscribe them on marble or canvas. What a magnificent destiny for the arts is that of exercising a positive power over society, a true priestly function and of marching in the van [i.e. vanguard] of all the intellectual faculties!""

Hmmm. As we can see, de Saint-Simon had a very optimistic idea of the future of the creative arts.

So let's have a few examples. At the time, The Residents’ first EP, and hell, most of their early work, surely sets its own template. Elvis Presley's initial sides. Thelonious Monk's Blue Note sides. Chrome's first few. The B52s’ first one; Waits' ‘”Swordfishtrombones”; Scott Walker's “Tilt”. Not Lou Reed's “Metal Machine Music’”(though it was striking); Suicide's first LP though, and Pere Ubu's first few; DEVO's first. Kraftwerk, and Faust, for years. Hell, Mike Oldfield's LP with the wibbly thing on the cover. Arguably, the New York Dolls' first two; the three classic Iggy/Stooges LPs. Four if you count “Metallic K.O.”. At the time, all these outfits were out there, streets ahead. The vanguard. And sure, I could name a lot more, but enough.

To be avant-garde, you have to be doing something, I think, which no-one else is approaching at the time. Now, we all know the on-line musical world is extremely varied, and in that sense, nothing is really avant-garde anymore. There are always exceptions, and I know you think I'm building up to tell you about a slew of outfits which are bonkers, bizarre and out there.

Nothing like it. However, in a different place and time, who knows?

Take Troatt. Never heard of 'em? No, their profile is lower than an ant's dirty bits. They've released three CDs - on E.C. Productions - and their presence on-line is best described as absence.

Full disclosure (as Barman might say): I do know at least one of these individuals (who cleverly hide behind pseudonyms). Rest assured, faithful reader, that if I didn't like the music, I simply wouldn't review it. Also, this is Adelaide, where brilliance sinks like a sidekick into quicksand.

Their first CD, 'This is... TROATT', is a bit like a Pebbles or a Nuggets LP. Remember them? The series which collected forgotten or less-widely known “garage” singles from the ’60s. Never mind that it was only a decade or so - by the late 1970s the music world was in the process of altering dramatically, and these songs were genuinely rare artefacts.

"This is ..." is the joy of localised music writ large. Most of the songs deal with drinking beer, local radio, poo, vomiting, and mortality. Which might make 'This is ...' seem terribly juvenile.

And it must be said there are aspects of juvenilia here, however: the first time you listen to TROATT will be a sidewalk-slipping experience, and the world will appear somewhat unusual afterwards. Your perspective will be skewed. I remember the first Nuggets LP I heard, and the impact of “Raw Power”, and “The Man-Machine” and “Faust IV”. Dizzying. Of course, TROATT sound nothing like the Stooges or Faust, nor Kraftwerk. But the effect of unreality, of flipping what we know upside down somewhat, is profound. For you?

TROATT's musicians play mighty fine, and the result is not teenage layabouts in Mum's garage, but a disturbing portrayal of middle-aged men making cracking music and singing about what moves them, like hangovers, beer, and pooing. Their second CD, “We Want Beer”, sees the boys expand their topical repertoire to include 'roids, suppositories, walk socks, guns, their own band, vomit and topical classic, “Hitler was a Cunt”. Arguably, 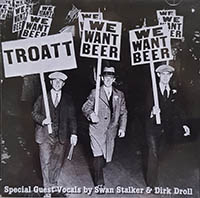 “We Want Beer” is the better CD, but it's a near-run thing. They tinker with styles occasionally, too - and one can only marvel at the galaxy of talent locked in their middle-aged garage. An outsider, or someone not exposed to this kind of lifestyle, might think it sad. But fuck 'em. TROATT are genuine normal Australian heroes, who simply don't give a shit what you think. They're not AC/DC with the fantasy rock thing, they're simply blokes with talent having a blast (with the occasional drunken belch).

TROATT don't build nukes to threaten their neighbours, don't bash people in the pub, don't nick islands and plonk runways for nuclear bombers in your back yard, and don't drink-drive stolen cars and kill nurses on their way home after a long shift, and nor do they put holes in oil-tankers. TROATT are one reflection of the underground soul of Adelaide - this review is their biggest internet exposure so far.

Are TROATT “avant-garde”? Who cares! Go get the CDs and rock out.

Those of you who live locally can get TROATT (which still sounds like a ghastly gut infection) at (Jake) Pickels Music Factory, 285 South Road, Mile End.

You can visit EC Productions here but as this site hasn't been updated in a while (a plus is that it still lists two bands featuring the late Tony Grudge on vox: Repo and Roadkill66, and a utterly bowel-dissolving 21 CDs by Fear and Loathing who play this Friday night at HQ) try this chap.

Tags: troatt , this is troatt, we want beer, ec productions