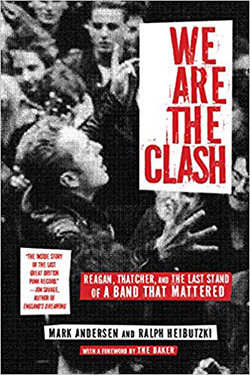 That story starts here: Jones had been booted after turning up late to one too many band meetings and Topper Headon had earlier been given his own marching orders for being in the thrall of King Heroin. And then there were two.

Three, actually. Mk2 drummer Pete Howard was in the “Combat Rock” touring line-up, as a hired hand. Guitarists Vince White and Nick Sheppard signed on and the five-piece lasted more than two years. Few would know that they played 120 shows - about a fifth of all gigs racked up under The Clash banner, although a fair few of them were acoustic (but more on that later).

So you ask: Who wants to read about the dying days of a once influential band? To which the response is: Are you kidding? Rock and roll is full of stories of death spirals, doomed campaigns and failed endeavours. They may be stories about the losers but they’re infinitely more interesting than lives lived on Easy Street. Be honest. It’s why there’s such widespread fascination with Iggy and the Stooges. That directionless death march across the US of A when their prospects of success (here comes success) were non-existent makes their latter recognition all the more sweet.

What say you as a fan of the New York Dolls, whose brief glimpse of the prize ended in red patent leather and squandered potential? Their star was in the ascendant for less than half their lifetime. Fate chose The Other Guys. And what about the ups and downs of the band’s notoriously doomed alma mater Johnny Thunders? Defeat from the jaws of victory, ad infinitum.

How many of you own a bootleg of the Sex Pistols’ last inept stand at Winterland and don’t agree you feel cheated? The band’s hopelessly mismanaged US tour and Sid’s Chelsea Hotel flame-out and subsequent OD are the real three-part money shot of their short first career.

“We Are The Clash” is more than just another book about failure. It’s an insightful look inside the personal politics of a band and the psyche of its creative powerhouse, Joe Strummer. If you’ve read the magnificent “Redemption Song” by Strummer’s mate, Chris Salewicz, you’ll know Joe was a walking paradox, an immensely passionate artist who was afflicted with depression and loaded up with guilt and conflicts of interest.

Joe was an English Woody Guthrie, paradoxically born of well-off middle-class parents, and was scarred by the distance from family that a boarding school childhood brought. His brother’s death by his own hand was a formative event. Living in squats was a rejection of his root-less teenage years and seeing the Sex Pistols was his epiphany.

For all his political rhetoric (and there was a lot of it) Strummer could never come to terms with himself and his personal politics - at least until much later in life. Global politics loom large in “We Are The Clash”.

Authors Mark Andersen and Ralph Heibutzki weave in a heavy sub-plot of historical events in the USA and Great Britain that inevitably play into The Clash Mk2’s story. Reagan and Thatcher were Strummer’s targets and the rise of both is inevitably a part of his story. Perhaps there was one bigger enemy - apathy - in Strummer’s sights but the fractured geo-politics of the early ‘80s is essential to an understanding of the man.

Andersen and Hebutzki tell the tale well. Neither saw The Clash Mk2 but have painstakingly constructed their story through interviews with members and a bulging hard drive of downloaded audience recordings and demos.

The story of The Clash Mk2 is really a tale of three parts. There’s the initial assembly of the “platoon” and its honing on the road in America - an attempt by Strummer to wipe clean the diversity but directionlessness of “Combat Rock” and the sprawling “Sandanista”. Then there’s the omnipresent and malevolent management team of Bernie Rhodes and his sidekick/provocateur Kosmo Vinyl.

Here’s where the rubber combat boots really hit the road. The domineering Rhodes might have co-founded the band but his confrontational, hectoring style and driving of a wedge between Strummer, an apathetic Simonon and their hired bandmates was a caustic approach that was doomed to end badly.

Sacked by the first Clash line-up only to be re-embraced when they (well, Joe, really) found alternative management wanting, the authors see him as a surrogate father figure for Strummer - a view mostly shared by “the new guys”. Rhodes’ vision of a band that fused raw punk with samples, drum machines and synths was so much of a polar opposite of Strummer’s own view of going back to the beginning that you’d wonder how they ever had a coherent conversation.

And “Cut The Crap” is part two of the story. A misguided, stylistically whack record that was mainly the work of Rhodes and an engineer, reconstructing Strummer’s song ideas with nary any meaningful involvement from the road-hardened band its frontman had built.

While that act of lunacy was underway, Strummer and bandmates embarked on an acoustic busking tour of Northern England and Scotland, re-finding themselves and bonding as a band in an unlikely setting. Andersen and Hebutzki tell this story of partial re-birth through the eyes of players and fans. Ultimately though, Joe doesn’t have the mental resolve to do as his bandmates urge and dismiss Bernie Rhodes. Why nobody didn’t smack his head in is a mystery that the book can’t answer.

Cue the final act and the fall of the curtain. After a handful of festival shows, Mk2 is no more by the time the album is released. Strummer is a psychic mess, no doubt worn down by fatherhood, parental death and the burden of trying to re-invent himself and his band too many times.  “The Only Band That Matters” might have been the invention of some CBS marketing wanker but it was also an impossible millstone to wear.

No band of their era has been more written about and mythologised than The Clash. The truth is somewhere out there - and no doubt Bernie Rhodes will have his own answer to “We Are The Clash” when his rumoured book comes out in 2019. “We Are The Clash” was a book screaming to be written. Andersen and Hebutzki have done a stellar job.