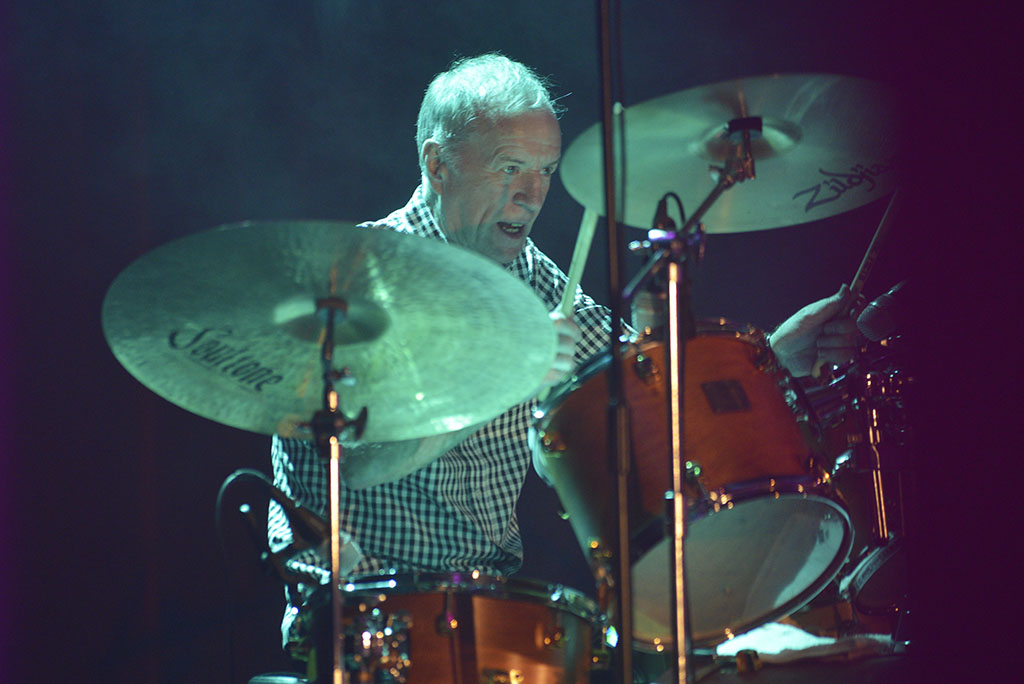 Steel has been behind the kit in The Animals since 1963. He joined its precursor, The Alan Price Combo, in 1957; Including those long breaks between reunions and breakups, that’s a total of 39 years, including the last 25 years. Steel has been performing music for 55 years.

Roberto Ruiz handles the bass and vocals (he’s been playing with them now for five years); Danny Hadley has the guitar, and he’s been with them most of this century.

You’ll probably recognise the name Micky Gallagher - he’s on keys. Yes, he was in the second incarnation of The Animals in 1965 … but it’s THAT Micky Gallagher, him what also played with Ian Dury and The Blockheads, and The Clash. He’s also done film scores and still plays with The Blockheads. 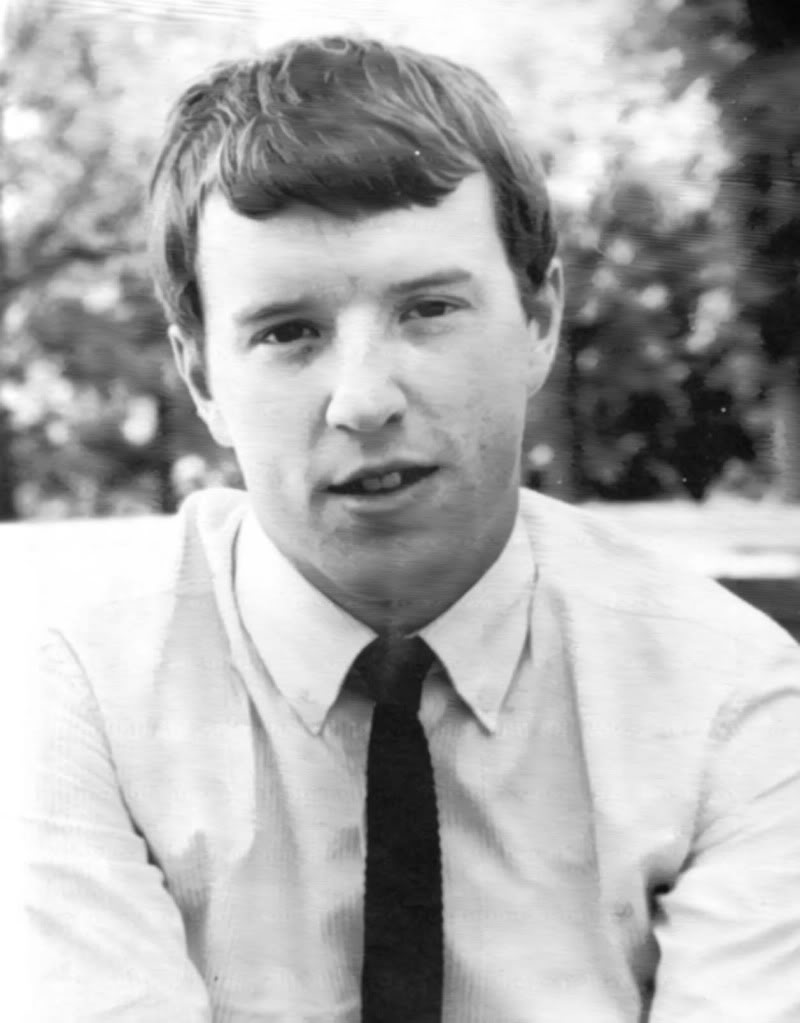 John Steel still lives about 30 miles out of Newcastle, with his wife of more than 50 years. We had a fine old yak and laughed a lot. I had loads more questions to ask, but …

It looks like a hell of a trip from Newcastle in ’57.

If you consider that the first wave of the British Invasion of the USA consisted of The Beatles and Dusty Springfield, The Animals were part of the second wave. One moment they were five blokes with Geordie accents with a minor hit making a wave in the charts and the next they were in the USA and up to their armpits in hysterical fans screaming and fainting.

After six or seven years of gigging in various incarnations, by 1963 they were ‘The Alan Price Rhythm & Blues Combo’ (same members as The Animals), they played with Sonny Boy Williamson and John Lee Hooker at the The Club A’Gogo (in sunny Newcastle) where they were the house band. R&B was becoming increasingly popular - it was a dirtier sound and scene, quite different to the pop of the Beatles.

The Rolling Stones were starting to make waves and, to a certain extent, there was a huge groundswell of interest in ‘what’s behind the mask’ of guitar-pop. Kind of the beginning of our own sticky-carpet scene; all over Britain, kids with instruments were discovering each other and the possibilities laid down by the bluesmen. The Animals have, through all these years, remained true to their initial sparks of inspiration; their sets feature, yes, many covers but … it’s the arrangements, the performance, and what the band bring to the songs which made The Animals stand out.

When the band moved down to London, they found their accents … well. Anyone familiar with the Geordie accent, and knowing how Londoners are, and how … closed shop … London could be to uuhhh… ‘parochials’ …

John Steel: A lot of people thought we were Welsh; an odd accent intrigues people, you know, they’d ask where you came from, and we’d have to explain…

By Christ, they were lucky they didn’t get much prejudice. In fact, they discovered that they’d attracted a Mod following as well. 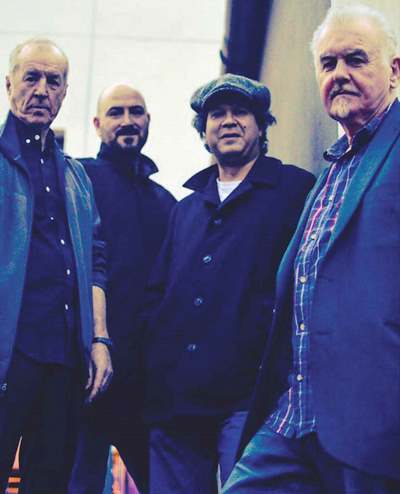 John Steel (left) and his Animals.

Your press release describes The Animals as being “widely considered the raunchiest, the dirtiest, and the most authentic and uncompromisingly raw band of their time.” More so than the Stones in, say, 1964 do you think?

John Steel: Well, were were pretty much from the same school; we had the same inspirations and the same audience - mainly male. We were a bloke’s band - and we weren’t mods, not into fashion at all. We had a male following until we toured the States [in November 1964] that we had the screaming women.

The Animals weren’t really a pop band, were they? Was that a problem?

John Steel: Well… a little bit. The first song Mickie [Most, 1938-2003] picked for us to do as our first single was ‘Baby, Let Me Take You Home’, which got into the middle of the Top 40. Now, we considered ourselves a R’n’B band, influenced by the delta blues and jazz, so to us on first hearing… ‘Isn’t this a bit too poppy for us, Mickie’? And - what persuaded us was going back to Dylan’s 1st LP [1962] and relistening to his ‘Baby Let Me Follow You Down’, which had been poached from someone else anyway, and we thought, ‘Well - if it’s good enough for Dylan, it’s good enough for us’.

Could you have imagined yourself still playing The Animals after 50 years?

John Steel: I have a distinct memory that when we first started having hits in ’64, I thought ‘Well, we’ll only get a couple of years out of this, then I’ll have to settle down into normal life… No-one expected it to turn out the way it had - certainly not to go on for so long … It’s been a hell of a lot of fun. The 60s was such an exciting time, everything was fresh and new. I’ve said before that we were the luckiest generation ever born, to be teenagers in 50s then rock stars in the 60s.’

I comment about how Berry’s influence was so heavy on Steel’s generation that on The Mike Douglas [TV] Show in 1972, John and Yoko and their band play with Berry and … they just can’t relax, while Berry just rips into it.

John Steel: Chuck Berry was a massive influence on my whole generation - we were really lucky to tour with him [and Carl Perkins] on his first tour of the UK in ’64 - 22 gigs, two shows a night, every one of them sold out. We recorded ‘House of the Rising Sun’ during that tour, it was our new number, poached off Dylan’s 1st album. We could tell it was something special by the reaction of the audience.

We recorded it in May ’64 in one take on a single track tape machine in a cellar in London - yes, in dead time. We went in, set up, did a balance and played it through … I’ve got the letter I wrote to my daughter at the time, telling her how well the song had gone with people, and we thought it was something special. At the time, we didn’t realise how far back it goes - certainly as far back as the 1930s in one form or another. It’s certainly got legs!

Your website has a quote from The Independent about what we can expect of the band onstage; "the nostalgic element comes with an enjoyably abrasive edge” - does that seem accurate to you?

John Steel: That’s about right I think. I mean, the nostalgia is unavoidable but our stamping ground is that darker edge, about the dark side of life, it’s why the songs stand up so well today. I never get tired of playing them.

Must’ve been hard fighting for The Animals name in court in 2008 - why did it become necessary?

John Steel: [sounding rather rueful] That’s something I’m not comfortable with. I mean, why start squabbling over something like that at our age, surely it’s unnecessary, and it was very costly as well … We could have had a pint and sorted it out together ourselves, but Eric’s … unfortunately, he always has to do business through someone …

… rather than do it direct…?

John Steel: Could be, yeah… I mean, once he got to doing what he felt he was meant for, he never looked back … I remember at art school one of the lecturers, who knew about our band, asked him, ‘What are your plans as an artist, when you leave here?’, and Eric said, very determined, ‘I’m gonna be a blue singer’…

Do you still have any of those 10” shellac discs you bought as a boy?

John Steel: [groaning] No, I wish I did… most of ‘em got sat on by an uncle at a New Year’s Eve party.

Do you still play the trumpet..? Ever miss it?

John Steel: No… and no, I don’t… it was a strange transition from trumpet to drums. I was always a jazz fan from an early age… Dixieland, then more modern jazz, like Art Blakey, Elvin Jones and so on. I’m certainly not a brilliant drummer, but I’m the best drummer for The Animals. But some of it rubbed off; if you listen to ‘I’m Crying’ [Price/ Burdon; the band’s fourth single in 1964] it’s not your usual rock drumming. 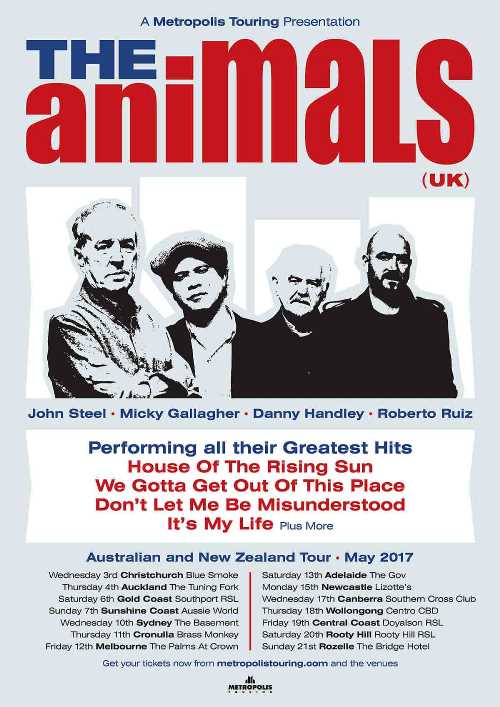