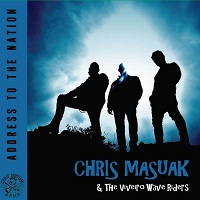 So, with his move to Spain and getting a new band up and giging, he’s partnered with an outstanding drummer in Juan Martinez and some new blood on bass in Abe Corujo.

This is a a great album.

Track one “1776” is pure rock ’n’ roll guitar at its best. A killer song to start an album. “Pick Up The Pieces”, “Just Go Away” and “Wishful Thinking” are all classic Chris songs - that’s to say, pure punchy pop with some very witty lyrics.

“FFS” is - well let’s be honest here…if there was not a venting of anger against (name a target) song on the album, it just would just not be right. It hits home and boy, does it rock.

“Gun Song” and “All Around” (a co-write with expat Aussie Greg Bowen) are more classic riff-driven tunes. The latter needs to be a single.I just love this track.

There’s an oldie but a goodie in “This Bar”, which has been heard as demo’s and live by various Masuak bands. It’s great to hear Klondike take what I always thought of as pure pop and give it some darkness. The guitar is heavy sounding against a killer bass-line and sound. And that lead break? As the saying goes: “When you’re the best, it’s not bragging.“

“Address to the Nation” is a wonderfully crafted album. You can hear the band is in a huge groove from gigging all over Spain. This album is a must for any fan of Australian-raised, Canadian-born Chris Masuak. Hopefully, it won’t be too much longer until he’s rocking locals pubs and clubs in Australia.

Oh. There are two hidden tracks on the CD. Shhhh!

It's been three years since Chris Masuak released his “Brujita” album with his rip-roaring rock combo The Viveiro Wave Riders. A bitter-sweet record that was full of melody, hooks and razor-sharp lyrical daggers. Subtle, Chris was not.

With the new album “Address to the Nation”, there's the sense that he and his band have many gigs under their belt since then The Spanish-based Wave Riders are developing into a very tough, street-level rock monster   The rhythm section of drummer Juan Martinz El Kara and bassist Abe Coreujo is as tight as a bloke with middle-aged spread putting on his stovepipe jeans for the first time in 30 years.

Opening track “1776” takes no prisoners with its blistering attack and soaring guitars telling you that the valves of the Marshalls are truly lit. That rhythm section is sounding like a semi-trailer on the Hume Expressway. Masuak’s cynical, anarchic approach to a topic like the Trumpian world in which we are living would surely have the Founding Fathers rolling in their graves. In just over three minutes, Masuak and his band nail the mess that the 'Murican empire has become.

We're thown 200 years forward to the mid-'70s mean streets of Darlinghurst with the next  track, “FFS”. Masuak gives a Kin Geri – that’s a karate term for a kick in the balls - to the myth-making of one of his  previous bands. We’ve all seen the gritty, warts ‘n’ all documentary “Descent into Maelstrom” by filmmaker Jonathon Sequiera, which lays bare the story of the Oxford Funhouse and the cult-like siege mentality that pervaded. With “FFS”, Masuak kicks surgically like a front-forward AFL player going for goal,  reflecting that it’s all bullshit in his mind in light of subsequent events. He does it the way he knows best with a riif-a-matic, Detroit-inspired song.

“Trance” slows the tempo, setting the scene with the pounding of the toms. Chris enters the song with crooning vocals that counter-balance the dirgey yet haunting chords. It is hard to believe all this racket is being delivered so well in four minutes. Suddenly, the lead-break explodes on the back of exotic scales. Masuak is an exceptional guitar player with a mastery of pentomic scales. This is “I am not worthy” territory for any other guitar player. The song moves along with his melodic vocals. This is brilliant song-writing and arranging, all the time powered by a gritty and intense high-energy band.

“Gun” is another classic, melodic rocker. It would have been the best song the Hitmen had delivered in living memory had it been played by that band with Masuak in their ranks. It harkens back to the classic Screaming Tribesmen days with melody and a solid hard rock riff. This song should be played right across US college radio. It conveys a sense of a fast car crammed with teenagers, cruising on a ‘70s Saturday night with an eight-track blaring.

“This Bar” is my favourite track - a slow, uncoiling song that sets darkest of the moods with its bass melody. Chris’s baritone has shadows of the original Alice Cooper band, mixed with Le Hoodoo Gurus but with much more technical prowess. ”This Bar” growls but with a sense of sophistication in its arrangement. Again, it shows Masuak’s songwriting to be ahead of the pack.

It was 30-years-ago that Masuak’s “Cowboy Angel” mini-album was released, casting Chris as the urban cowboy with a set of songs from the same left-field direction. With this style of music the stuff he grew up with, Masuak shows he is no slouch: He can throw in a Newtown Hotel yodel like the best hillbilly Canadian Hank Williams. “Lead Singer Syndrome” is not only funny as the ultimate barroom piss-take, it’s also a great country song. It’s as witty as the Stones in “Faraway Eyes”. Chris understands the swing and twang at the heart of this style while making us laugh.

“Address to the Nation” is an awesome record, drenched in melody and soaring guitars, pumping away at street-level with a hard-hitting rhythm section. It’s witty and at times dark with Masuak’s vocals the best I have heard from him. - Edwin Garland