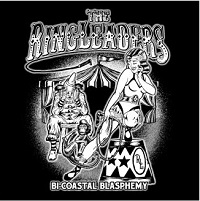 But the killer app is May’s voice; it’s the sound of your inbred hillbilly cousin strangling chickens in the wooden coop behind grandma’s shack, deep in the Appalachian Mountains. He’d slice off their heads, but his blade’s dull from a night spent whittling wooden sex toys.

People used to call this stuff KBD (Killed By Death) after a series of 1980s compilations of US punk bands. God knows what tag they were giving it by the time The Ringleaders were cutting their teeth in similar acts during the ‘90s. Let’s agree to call it “high-energy punk rock and roll” and leave it at that.

You’ve heard the same sound in ADZ, the New Bomb Turks, Powder Monkeys, The Humpers, the Laughing Hyenas and Zeke. If they tickle your synapses, The Ringleaders will too.

May’s opening howl on “Bed of Lies” would chill warm beer at 20 paces and Molnar’s keening licks are a nice touch before they yield to his trademark raw barrage.

It’s hard to argue with the sentiment of “One Bullet One Hipster”, if you can separate the lyrics from all the rage. “Sicko” is an exercise in labelling someone. It might be more polite not to say anything if you can’t say anything nice, but it sure sounds good to these ears.

This sort of music can end up as fury signifying nothing much, but The Ringleaders have the chops and character to avoid that. The engine room is as tight as a fish’s arse and Molnar adds squawls of colour in all the right places. The odd spot of hoodlum chorus singalong brings a touch of menace.

Eight of the 11 tracks (it’s an LP with download code) were recorded by Gavin Ross with Matt Hyde (69Eyes, Monster Magnet) marshalling the rest. Having your ears excoriated never felt so fun.