In real life, we naturally compare things, balance things out, weigh their relative importances; record or CD reviews rarely compare things. Which is bloody odd given the humungous amount of information and music sources we're stuck with these days.

Isn't it interesting? Instead of seeking out new websites and new information and new music sources, we rely on social media and other people to do that for us. We like to stay in our own little village.

Speaking of which, have your noticed how, over the last 20 years or so, the Internet has become more xenophobic, more tailored to our own little area? The wider Internet world has effectively vanished from our searches: results come up from the USA and Australia, but not, say, China or Canada.

How I long for the day when I can pre-program my search engine to ALWAYS omit ANY AND ALL information relating to my searches of: AFL, cricket, US sport, US genealogical guff and so on.

Anyway. This watershed thing. When I'm reviewing a record or CD, if I give it a maximum it's to get your attention. It's worth buying. I liked it. I try to tell you why. If I give more than maximum stars it's because to me, the record or CD is, if not a watershed LP, then something pretty damn close.

A watershed LP is one which I know my younger self would hear for the first time, and be astonished, amazed, delighted and devour over and over like repeat helpings of my mum's fabulous trifle.

As yet on these watershed lists, more particularly on those individuals who have kept their list to 10, I've yet to see Chrome, Silver Apples, 10CC, Godley and Creme or Lewis Furey. Also, these things depend on when you first heard them, who you were at the time, how old you were and so on.

The first four Stranglers LPs are classics; when I listen to (say) the first again I hear how lumpy and uneven it is, and how rooted in its time. I do hear the wonder again, and recall the massive impact it had on me, but now my taste is broader I can be more critical. Even so, those first four Stranglers LPs (including “Live X-Cert”), like the first four Damned LPs, the first three Ramones studio LPs (and “It's Alive”) were “world turned upside down” events - for me.

The truth is that if you love music, especially the wilder shores of music, picking 10 is utterly impossible. Look: one of those stupid UK mags recently stuck out a CD comp of 25 (or whatever) top “noise” songs (their definition was thankfully fairly broad) ... bloody hell. There were, I thought, quite a few glaring omissions. I sat down and wrote a list. Astonished myself that I got to 50 with little trouble - and realised I could probably knock another 50 again. Ridiculous.

What have I been listening to lately?

The Sparks' CD comprising “Sparks” [nee “Halfnelson”] and “A Woofer in Tweeter's Clothing” (Dojo)? No? Not on your radar? In the same way that, had I heard the Silver Apples LPs as a teenager, I would have definitely jumped for joy. Skipped, even. Utterly inventive, intelligent, joyous celebrations of life, youth and possibilities. Fantastic.

Now then. If you'd heard the Reverend Beat-Man's album for the first time back in '77 (baby) what would you have thought?

You'd have loved it, that's what. It's better than some of the "Pebbles" instalments (The Barman gives it four bottles, I say get stuffed - and I give it five). The basic premise - “blues trash” (which as far as I'm concerned is the title) - is misleading.

Essentially you're dealing with several styles, which Beat-Man Zeller tells us in his press-release, "had in my head for all those Years and already payed them live many times but for the recordings i wanted to keep everything fresh and we recorded it all in 1 take without rehearsal (i showed them the songs quick on my acoustic guitar before we recorded it) - and i think that was the way to do it FREE ..."

Zeller and the New Wave are touring the US, the UK and Europe - dates here  - and, to put it simply, are worth hopping a 747 armed with a large wodge of someone else's money just to experience.

As an impressionable teen, however, would this LP have been a watershed for me?

I don't know for sure. But. Maybe. It's certainly comparable to, say, The Gun Club's “Fire of Love”, along with the Cramps, another band which launched a thousand bands. Incidentally, you probably have some of Zeller's CDs in your collection, because he runs Voodoo Rhythm - in fact if you don't have at least 10 of the label’s titles in your collection, you don't deserve to call yourself a fan of rock'n'roll. Ditch the lamer Stones and Bowie LPs, you don't need them, and stock up on Voodoo Rhythm, and let your body do the bopping. 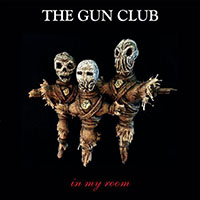 So allow me to reiterate: “Fire of Love” might not have been a brilliant LP (although I think it's rather wonderful) but it was most definitely a watershed for many, many others. Like those Bowie and Stones fans who own every LP, including the rather feeble ones (dear god, there are so many, aren't there?) there are Gun Club nutters out there who grab anything and everything...

We haven't seen too many Gun Club releases since Jeffrey died of the effects of his demons 22 years ago; one can only assume there were undignified squabbles over the rights between god knows who and them over there as well. 20-odd years worth. Fuck.

Anyway. Back when the Gun Club were a thing, reviewers couldn't get past the idea that the band wasn't producing another “Fire of Love” (why reviewers respond like this I have no idea); all the Gun Club's LPs are well worth seeking out.

It is, of course, arguable whether any of them could be called “watershed”, including this latest, "In My Room". I can understand people's disappointment in one sense. But that's not really the point. Jeffrey Lee Pierce was, frankly, a force of nature, a man on a journey with no definitely predictable end, with adventures which could provide a myth as enduring as Robert Johnson.

Out of five, “In My Room” is a four bottle LP (essentially recordings made on the fly a few years before JLP died, which means there's a few chestnuts and a few not-quite fully sorted songs). You may enjoy it. You may not. I did. (The cover is completely inappropriate, by the by, given the content). Personally, I'm more looking forward to the LP by Jeffrey and Cypress Grove, “Anarchic Blues”, out on Bang! Records on June 1.