Mick Harvey said it best about Rowland S. Howard when he said:  'Sometimes people are ready to go because they have been sick for a long time, but Rowland really wanted to live'.

Well, you can swap Rowland for Brian Henry Hooper in that sentence. Brian really wanted to live. He had a young family that were the priority, as he often said. A little context, then: Brian played on Rowland's last LP, "Pop Crimes", and (also with Rowland) on Spencer P. Jones' first solo LP, "Rumour of Death" (1989, Red Eye).

Brian, Rowland and Spencer P. Jones weren't just bandmates - they were all genuinely very fond of each other. Sometimes we don't tell the people we love just how much we love them. The day after Rowland's funeral, The Age ran a photo taken from across the street; as the coffin is brought out you can clearly see, to the right, Brian and Spencer. 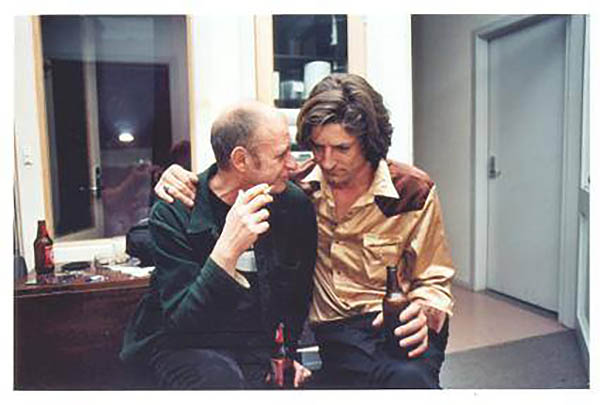 I remember talking to Brian after the second Adelaide Pop Crimes Show (the Rowland S. Howard tribute by his friends), saying how hard the show had been to watch (I had tears in my eyes as I said it). Brian gave me a small understanding smile and agreed, it was hard doing the songs too.

In my opinion, Rowland, Brian and Spencer share one frustrating thing in common; their songs are not as well-known as they should be. You could easily imagine an LP of assorted famous names doing Rowland (there was one compilation of covers), but there should be one of Brian and/or Spencer songs, with appropriate tours. (ED: A Spencer tribute is imminent on Beast Records).

Because why, you say?

Because their songs were always that good.

"I Won't Bend For You" is Brian's seventh LP: his second after the start of his heroic battle with cancer. His last LP, "What Would I Know?" (also on Bang! Records) was a masterpiece of simplicity and invention. Guitar, piano, drums, Brian's stark, cleansing voice.

All Brian's records are steps forward into some new terrain but "I Won't Bend For You" is different again, showing Brian's songs in the context of a full, rich, virus-blooded band presenting a well-rounded, balanced set of modern classics.

Except that, with one exception, these songs haven't had the years to become classics. That's your job.

Because why? After a single turn on the player, “classic” is the word. The core band is Mick Harvey, J.P. Shilo and Dan Tucceri, with Brian up-front on vox, and occasional guitar and bass. I must say straight out how much I admire Harvey and Shilo - partly because they've now worked with each other for so many years that they seem bonded, where Shilo takes us into extraordinary territory. Tucceri's piano adds several degrees of intensity (think "Raw Power" era Stooges, or "Rumour of Death" as above). 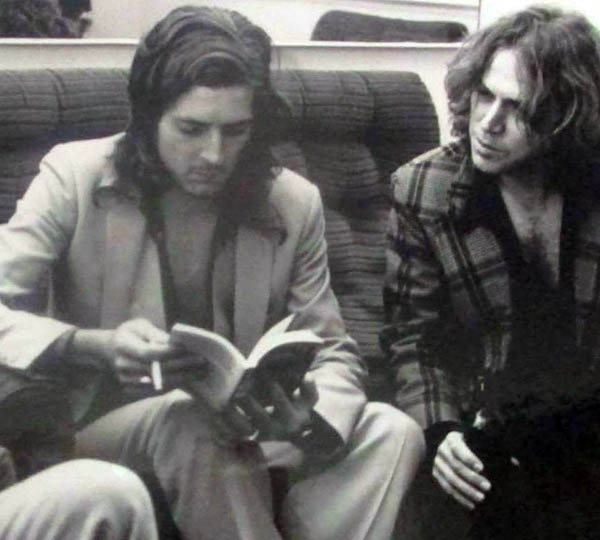 "Every Time I Fall Down" opens with an insistent, cantering juggernaut with a guitar line which is more country sigh than whine, so R'n'R Rule #1 applies: Turn It Up. "Every Time I Fall Down" is simple, gutsy, ravenous and the rhythm chugalugs like a champion. There's a distinctly Stooges-esque vibe here, too, from Tucceri's unstoppable piano and Harvey's hallucinogenic organ (oo-er!) to Brian's ig-meets-zig vocal (complete with half-cough, half-smirk at one point). Spencer and Halloran are in there on guitar; that would be a pairing I would've loved to have seen on stage together.

I won't go through every song. Suffice to say there are pieces which are darkly amusing on first listen, but if you know the back story it just gets, (as late producer Tony Cohen put it on his last LP), "darker".

"Like a Dog" is one of those pieces, a deviant 1950s itch with howl and dirty temptation. JP's vocals are both harsh and lux, with a guitar shimmering and scraping around like a kid digging for the last of the forbidden tasty goodness of a stolen mixing bowl.

If not for Brian's multifaceted vocal on "It Ain't Free", we could be in "Queen of Siam" territory. Big, deadly, purposeful.

That's enough comparisons. If you've not figured out what this LP is about and where it's heading, "At the Moment" should make it crystal.

Brian's words hover and repeat like crows above roadkill, the rhythm complex and ugly, the guitar a scythe through wheat. It's hard to listen to without tearing up. One more thing that stands out for me here, is that while Brian's voice has reminded many of Bowie - and he was an obvious influence - it usually reminds me of the man Bowie eclipsed, Marc Bolan. Certainly Brian's personal observances chime more with Bolan than Bowie (who I regard as more of a fantasist than an artist, but hey).

And I had a damn good cry during "Shame on You". Brian's helplessness, vulnerability and sadness about being estranged in certain personal relationships is obvious. It perplexed him at a time when he was doing so well in his life. His wife Ninevah encouraged him to focus on the good things in his life and other projects ahead. It's a good thing she did as the focus on his music is a gift to the rest of us. JP's violin opens up another dimension.

The title track opens the second side: thuggish, measured, brutal. There's the savagely beautiful "Lady Grinning Soul", where Brian's soulful, rich delivery undercut with quavering guitar and violin... he sounds like something inside is breaking. It's a stand-out performance.

"I Won’t Bend for You” is a beautiful, powerful LP. Me running through the rest of the songs would be just that. Go listen. You should know by now you need this LP. Hey, it's lockdown, what else is plastic for? Buy it here or here.

Brian then focused on the Nagambie recordings for "What Would I Know?". This album was mastered and due for release by the time he was diagnosed with lung cancer. I followed through his wishes by releasing and launching it in November 2018. Around the same time, six months after his passing I contacted Mick Harvey and commissioned him with the task of helping me to release the next record; "I Won't Bend For You".

Brian had asked me to follow through any unfinished recordings and ensure Mick Harvey was central in their co-ordination and production. Brian wanted to finish this album, but became too ill to go into the studio. Mick took the recordings from Incubator studios, worked on the songs at home and also went into the studio with JP Shilo and Loki Lockwood. Loki generously arranged the studio time. Mick and JP Shilo were given the freedom to work on this album and they channeled Brian's musical acumen to its precise point.

The album's final track, "Levitate", is a beautiful piece. Dan Tucceri recalls Brian appreciating it but at the time hadn't decided its role in the album. After listening to it while Mick was working on the album with JP I agreed that it should stay as the final track. It became a tribute to Brian from Daniel Tucceri. It's a raw and real album, a final product that Brian would have been pleased with. 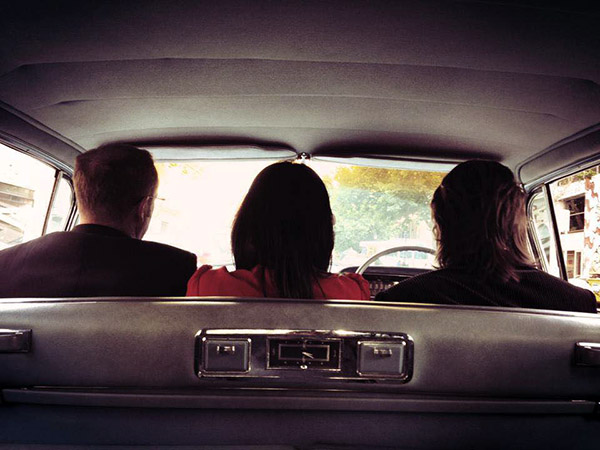 Bang! Records aren't the only folks issuing LPs by both Spencer and Brian; Spooky Records have released plenty. Loki Lockwood, the man behind the label, is a consummate producer and live mixer (and a pretty damn fine instrumentalist when you shove an instrument into his hands). He also mastered Brian's first posthumous LP, "What Would I Know?".

Loki Lockwood: I first met Brian early 1990's when I had the pleasure to mix The Surrealists. To say I was blown away by his bass playing would be an understatement. So loose, but an uncanny ability to drive the tempo - this was something I'd rarely heard in the local scene. At the time we were moving in the same St Kilda (drug) circles so we got to know each other a little and, though late to the party (missing the earlier incarnations) I would see Brian playing with Beasts of Bourbon.

Fast-forward to 1999 and the establishment of my label, Spooky Records, Brian and I struck up a life-long friendship when the Spooky released Spencer P. Jones' second solo record, "The Last Gasp". Once again Brian's unique bass playing underpinned the cacophony of Spence's 11-piece big band. Over the next 20 years we frequently worked together, particularly live, mixing Brian as part of The Last Gasp, Beasts of Bourbon (and the Beast's live record "Low Life"), Rowland S. Howard and plenty of Brian's solo shows, with and without a band.

Brian was a hugely-underrated singer and songwriter in his own right; his songs are laced with wry observations, honesty and anecdotes of his life; I became a huge fan of his work as well a friend. Who can forget songs like 'Motherfucker, Motherfucker', 'What The Hell Was I Thinking?' and 'I Get Up Again'.

In 2010 Spooky released his Mick Harvey-produced album "Trouble" and later I had mastering duties on "What Would I Know?" At this point we started to make plans to really record for the first time together but was put on hold with Brian being diagnosed with the big c. We never made it to the studio so when I was asked by Ninevah to help complete the sessions Brian had started with Mick Harvey, of course it was a huge honour to be a part of this. For me, mixing "I Won't Bend For You", Brian's final record with Mick Harvey and JP Shilo was like completing the circle. Brian, wherever you are, I consider we made that record we promised to make.

There's no lyric sheet. But you won't need it. The words are clear, and the emphasis on them is... fabulous.