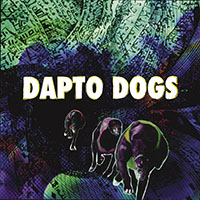 “Epic Fantastiche” is an unfashionable but utterly fucking compelling 10-minutes and you don't get Tom's vocal until half-way in. The EP is worth buying for this song alone, the directions it rotates and shifts into is just bloody wonderful. Heavy guitar? Far, far heavier than (say) Tom Verlaine - but what would you expect from the two guitarists (Tom and AJ Morley) who used to be in Leather Messiah?

Tom's talent, ingenuity and ability is, as far as I'm concerned, fucking unassailable. I loved Leather Messiah (even if the sods never got a copy of their CD to me, the swines), but in some ways the Daptos are a better creature. I did hear one twat describe them as “stoner rock”, but most specimens of that ilk I find fucking dull.

“Get It Alone” is a different vibe, almost (for me) recalling the Laughing Clowns while sounding not a lot like them; or even the Velvet Underground from 1969.

“The Mole'”- jesus, we've just found ourselves in SoCal in 1983, and this is the Meat Puppets minus the chirpy whistling. Full-bore, brutal chopping with a tune that lightens your heart.

Now,“Do What You Want” closes with a measured, heavy slushily romantic stomp. Every song on here is dead groovy, each is very different, and “Do What You Want” is both romantic and dangerous, dumb and lovely, smart and ugly. Slow? Deadly. Satirical? Pffft, I'll leave that to you...

At around 27 minutes Daptos make one of the most... beyond magnificent ... impacts I've heard in years.

What do you do now? Hustle to Canberra, spray paint “Daptos rule” on Parliament House (not forgetting to fire up a few prams while you're at it, it's cold in Canberra in winter).

The Daptos are another Adelaide band to bring to your town.

Get the downloads here or visit Mr V Records.