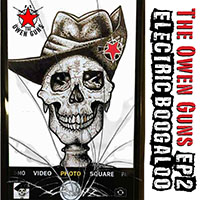 “Electric Boogaloo” is laced with social commentary and humour. Geoff Mullard’s production is top-shelf and hits like a really strong vodka depth charge after an afternoon on the beers. It’s doubtful The Owen Guns are straight edge but this CD could have been on the Dischord label. Don’t pay more than 12 bucks.

Opening shot “Sick” leaves an impression like a skid mark on white undies. With its “1-2 fuck you” count-in there’s a fair chance that “Expert in a Minor Threat T-Shirt” is going to be one angry motherfucker. And so it goes. The fleeting knife’s edge solo and spoken word outro put its sentiment beyond doubt.

Can you play the Hard-Ons’ “Just Being You” harder and faster than the original and not lose its essence? Of course, you can. The Owen Guns’ version latches onto the song’s undulating melody and adds a degree of tension to the vocal without straying far from the source.

“Is This Punk?” poses the eternal question and then answers it. “Everything’s Fucked” is also self- explanatory and welds call-and-response vocals to an abstract Fugazi guitar solo. The songs are strong and the playing lives up to that.

Don’t think about it too long. There are 100 copies only on CD and it's found here.