zzzzYou may think I have digressed. I have not. Wilko Johnson was a huge influence on the British punk scene. And Wilko’s hero ..? Well, the opening song here, Going Back Home, was co-written with Mick Green, then the guitarist who played with Johnny Kidd and the Pirates; Green could play rhythm and lead at the same time, which not only influenced Johnson, but some bloke called Pete Townsend and the band he propelled, as well as a host of other somewhat awestruck Brits.

You may want to read Green’s obituary here.

You’ll note that Johnny Kidd and the Pirates’ cover of “of Piano Red's Doctor Feelgood, with Green's crackling fret work, also inspired the Canvey Island band of that name.”

From Blues Rocker on FB; “Daltrey; "It turned out [Wilko and I] both loved Johnny Kidd & the Pirates. They'd been a big influence on both our bands. That heavy power-trio sound, backing up a singer; it's a British institution. No-one does that better than us.”

The Pirates reformed around Green in 1978 and demolished all before them.

Like Green, Johnson’s guitar style, if you’ve ever seen it, is nothing short of remarkable. I mean, apart from the most brittle, splintery chord structures, the man ain’t using a pick. He’s not plucking the strings neither.

He’s belting them with his fingers. So, that’s rehearsal, private practices … and an hour long set. Watch

Now, again, in case you don’t know, Dr Feelgood, with most songs being written by their guitarist Wilko Johnson, were shooting into the public’s eye and brain in the mid-1970s; raw rock’n’roll in spite of the appalling dreck perpetrated by the ELO’s, Supertramps and Keith Emersons of the world. We now, of course, have even more appalling dreck - just take a look at what passes for the charts these days. Same old slush, mostly.

While we’re on the topic of the charts, you may recall a chap called Roger Daltrey. He used to sing for a band called The Who who, as far as I can tell, should’ve quit after their loopy drummer, Moon, passed on to that great bawdy-house in the sky; they’ve never been remotely the same since.

Now, I confess this review is coming a bit late. That’s partly because of the ‘Oo’s ‘orrible showing at the Olympics, which quite put me off my cereal. So even though "Going Back Home" was expected to be Wilko’s last recording because he’d got a rather nasty sort of cancer, I put it off.

First, Daltrey’s voice is an amazing, powerful thing, and he contorts it into shapes only white British blues singers can contrive; The ‘Oo and thousands of Brit bands like them grew up savouring the illicit thrill of the black blues, brought in by sailors and assorted reprobates. Most Brit singers tried to copy or mimic these styles, and rare was a band or singer which could extend or change the form already established. I think you’ll find that Mr Daltrey was one such, and … his voice is huge, liquid, painful, excruciating … by God he’s good.

Second, the outfit playing with Wilko and Roger is with is simple and powerful - drummer Dylan Lee Howe (Wilko’s regular drummer and current with the Blockheads, of Ian Dury fame), piano/organeer Mick Talbot (of the Style Council but don’t hold that against him), Norman Watt-Roy (of Blockheads fame) and harmonica by Steve Weston. Guitars? Well … there’s only the one, innit. And … yeah, that’s just one guitar at a time. Just like when he was with Dr Feelgood, and Ian Dury.

Even better, the LP was recorded in a week.

Five of the songs date from Dr Feelgood, one from his next band, the Solid Senders, and there’s a cover of a Bob Dylan song (which I should dislike but I don’t so I’ll have to seek out the original). "Keep on Loving You" dates, I think, from his more recent live band, which recorded The Best of Wilko Johnson Volume 1 and Volume 2 (I love the covers of these, they look like criminals); while Some Kind of Hero and Ice on the Motorway seem to date from the early 1980s.

Almost all are stomping, get-it-here brilliant, sharp and spiky, filled with Daltrey’s gloriously wrenched vocals, and … then there’s Wilko and … everything slams together. Really, this outfit are tighter than a gnat’s derriere. You can hear the Detroit car-body presses whamming.

Dave Eringa produced and mixed and the result is big, punch-you-out and make you cry sounding.

"Going Back Home" opens the LP and …just the title alone says it; Wilko knows his days are numbered and he’s accepted it. The song, as I say, was written by Mick Green (RIP) and it’s a corker. The Feelgood’s version is great. But this is definitive.

And that, dear reader, is where I am going to leave you. Annoyed and unsatisfied, until you pick this little beauty up and play it, preferably loud. You should already know all you need to know from the magic phrase above, but in case you still don’t, here’s the link to get it and other goodies.

This other pic is of Wilko in the popular series Game of Thrones: 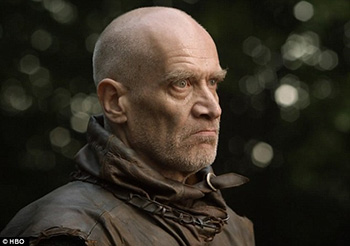