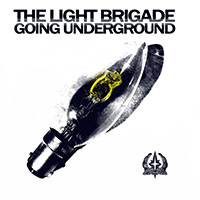 Rock and roll's fascination with the doomed is a story well told. From the members of the 27 Club of Janis and Jim to Johnny Thunders, Amy Winehouse and beyond, it's a love affair that's been going on a very long time.

On the other hand, you don't have to die to be an occupant of Rock's Pantheon of Lost Causes. It's much larger than any physical graveyard and my mate Bob Short is a proud tenant.

It's not that "Going Underground" or its makers are going out of their way to sell no copies or that its investor (Bob) wants to finish deeply in the red side of the ledger. Not when there are more guitars to buy.

Even Bob knows that "recouping" is not another word for a re-constructed chicken enclosure. He's also a realist who knows the sweet, abrasive sounds of this collective will never grace the airwaves of a commercial radio station.

In his own words:

And so here we are. Cursing a band with a poorly fated moniker. Safe in the knowledge no-one will listen. A release doomed to failure. A bunch of fools staring down the long night of oblivion.

"Going Underground" is an LP of covers of songs by the Velvet Underground, Leonard Cohen, Bob Dylan and John Cale, by Bob's fatalistically-named collective of which he's the only constant member. It's as anarchic as any late '70s punk record, not only because of its unique approach to its source material but also because Bob's stun-guitar is splattered all over it. Aural blood on the tracks.

That guitar sounds positively Thundersesque on Dylan's "I'll Keep It With Mine", where Maria Mitchy Merle (of Sydney duo Glenn or Glenda) does a fine job on vocals. She returns on "I'm Sticking With You" and nails that one too.

Here's a tip: "Ocean" sounds just like "Down On The Street" if you accidentally play it at 45rpm. This shouldn't be a shock: vocalist Ripley Hood plays with Bob in Australia's finest Stooges cover band, The Four Stooges. Played at 33rpm, "Ocean" is stunningly good. Rip sounds more like Iggy than Lou, but the feel is just right and it packs a solid sonic punch.

Listen up photo-punks: "Venus In Furs" doesn't need no voila. Short's excoriating guitar sees to that. Alley Brereton can't match Nico's voice for cold disembodiment but she brings her own style and declaims in the face of that six-string assault. It's one of the best things here.

Never been a fan of the Velvets' song "Jesus" and even the version are doesn't change that. Ally and Bob make a good fist of a difficult vocal and the guitar matches the resigned optimism.

"Some Kinda Love" benefits from being played live and a playful sing-speak vocal from Robert Brokenmouth (yes - that one) with a Bob Short assist puts a radically different spin on a classic. Uncle Lou wasn't averse to the odd hoot and holler in his dotage, so he might have approved. No. He would have hated the whole record.

"White Light White Heat" features onetime Psychosurgeon singer and current roadie to the stars, Stan Armstrong, and is every bit as sonically annoying as the original. Nothing succeeds like excess and The Light Brigade renders this with all the subtlety of a turd on a Wedgwood dinner plate at a Royal dinner party.

God save the Queen, you say, because nothing will save The Light Brigade. You might think no recording equipment was damaged in the making of this song but the people involved may tell a different story.

"Pale Blue Eyes" is all Bob - plus some dissonance - and one of two songs where he solely takes the vocal lead. Stop-start and drum machine rhythms put this in the odd box - and that's exactly where it should be. An album like "Going Underground" has no place for faithful covers. I'm not familiar with the original of "Saeta" but Bob's confident vocal on this brooding dirge is a keeper.

"Going Underground" is home-spun surrealism and the sort of record the damned (the people, not the band) will be listening to in subterranean rock and roll nursing homes while the rest of them are humming along to Amy Shark.

Buy the download or This email address is being protected from spambots. You need JavaScript enabled to view it. for a vinyl copy