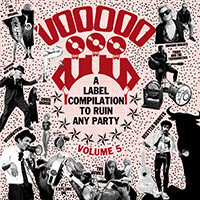 Label honcho Beat-Man started releasing his own records out of home country Switzerland in the last century because nobody else would, and has been making an art form out of being a cottage industry ever since, touring extensively on the smell of an oily rag. He’s also perfected working with the weird and wonderful from around the globe.

Naturally, Beat-Man figures prominently. His band the Monsters play scuzzy garage rock and open the collection with “Smell My Tongue”, a confronting assault on the ears. As Reverend Beat-Man, the label’s main-man contorts his vocal chords and shoves them into places they don’t belong, pairing with Isobel Garcia for the warped blues plod of “Black Metal”.

The gals rock too: Garcia is an LA-based chica who contributes her own swampy cocktail shaker, “Baby OK”. Loose and spirited with some ambling, rambling keys and big on the reverb. Greasy harmonica and riffing  guitar sit behind the vocal as Trixie and the Trainwrecks deliver “Too Good To Be True”, and it’s ultimately a conventional Chicago blues stomp.

Honshu Wolves are led by Maryanne Shewolf and “Tell Me” is the most radio-friendly song here. The label calls them a “Delta Blues Desert Gospel Space Punk Sensation” and there’s a strange and brooding edge to their contribution that’s heightened by some smoky guitar-work. Evocative.

Want the hard stuff? Destination Lonely brings it by the barrel-load with their distorted Troggs desecration, “I Want You”. The MC5 cover pales. Bad Mojos really do what they say on “Crash and Burn”, approaching the sound of feedtime, while “No Make Up” from Sloks sounds like it was recorded in a toilet, with a cacophony of distortion (instead of a flush), to take it out. No shame in that.

Roy and the Devil’s Motorcycle (“Learn to Lose”) and The Devils (“Coitus Interruptus From a Priest”) take mutual pleasure in de-volving the blues in their own way. The former has been at this for 20 years and formed in rural Switzerland. They have a psychedelic twist. Listen to their music long enough and you won’t need drugs. “Learn to Lose” is a good example.

The Devils are altogether more straight-up, choosing to put the blues through a blender. “Coitus…” pins itself to a relentless rhythm and soprano vocals and powers long like a runaway train.

Degurutieni is from Japan and weave a weird musical spell of exotica-meets-cocktail-music that works to a tee on “Acme in the Afternoon”. Percussion and a melodious bass-line propel Alec Degurutieni’s beguiling, other-worldy vocal before a synthesised (toy?) horn takes it out.

A self-described Flamenco trash one-man band from Spain, Nesttler Donuts, makes a mark with the short and emphatic “Infeccion”. The Sex Organs (who hail from Amsterdam via Zurich) just leave a wet patch with “Lubrication”, an apparent ode to the joys of rubbing one out.

Oddness continues with ET Explore Me’s “Drvolume 5ug Me”, a funk-tinged ode to mood altering marked by distorted fuzz organ and a boogie thump-and-rumble bottom-end. Oh that the rest of the Netherlands was this strange.

The Dead Brothers swiped “Mean Blue Spirit” from the Kinks circa “Something Else” which is some kinda compliment. Strings add to the air of oddness. Alas, they are now defunct following the passing of key member Alain Croubalian last month.

“Volume 5” is prime stuff. Dig it up at the label website here or on Bandcamp.