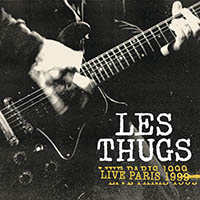 At times they sound like Buzzcocks if Pete Shelley had smoked Gauloises.

Eric Sourice sang in English and got quite political, but most of the lyrical content gets swamped by the band’s bulldozer sound on “Live Paris 1999”. Which isn’t to say it’s badly recorded; the French accent tends to burr the words and the most pointed song (“Dirty White Race”) isn’t among these 21 tracks. Sourice might have cut some corners on his English language vocalising, by the way.

“Live Paris 1999” is all business. Songs are reeled off, one after the other with little pause for breath and scarcely any in-between song patter or acknowledgement of the audience (who sound rapturous from the noise that does leak onto the tape.)

There’s plenty of evidence that Les Thugs were a step above much of their competition. For every brutal pummelling like “I’m Just Kidding”, its highly-strung companion piece “Femme Fatale” or the hardcore droning “Lost in the Suburbs”, there are occasional moments of restraint. “The River” is one of the best with its delicate melody line underlined by spidery guitar, and “Mio Mio” nods to pop without dispensing with any of the power.

There are two covers, the Dead Kennedys’ “Moon Over Marin”, and a very warped and muscular “Brand New Cadillac” that outstrips The Clash’s by several kilometres. Apart from that overt nod to Vince Taylor, there’s a deeper ‘50s influence at play, best shown in the shuffling rhythm that underpins “And He Kept Whistling”.

Random musings: “A Chance” would have done the Buzzocks proud and any resemblance between “I Was Dreaming” and Brooce’s “Dancing in the Dark” is purely coincidental.

You don’t have to know the back catalogue intimately (I don’t) to dig this. Buy direct from the label here.