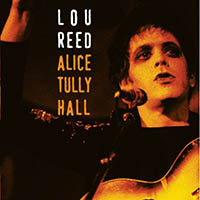 “Live at Tully Hall” is a re-booted bootleg, put out with the blessing of Reed’s estate. The original boot's famously known as "The Phantom of Rock". It’s from a time when FM radio broadcasts were all the rage and home taping was the only way such revelations could be shared outside of a station’s broadcast area.

Almost the only way. A helluva lot of those tapes were committed to vinyl, in no frills packaging. “Little White Wonder” (1969) might have been the first bootleg but the floodgates were open by the middle of the following decade.

They lined the walls of certain late night bookshops down what’s now the Cinema Strip of George Street, Sydney, back in the mid ‘70s. Stones…Aerosmith…the New Barbarians…Foghat…Zappa…and Uncle Lou. They lasted until record companies pressured the cops into acting – at which point the gendarmes also hammered the handfuil of daring stores that brought in imported official albums, which was technically illegal.

This show could have been one of those mimeographed cover boots. I can’t recall. My copy was a traded CD-R  that came much later. It’s from a New York City gig on January 27, 1973. The Easy Action version is certainly a sonic upgrade.

These are faithfully rendered versions of songs that would be a staple in Reed’s live set for two or three years. Lou sounds clear-headed and is singing his arse off. The songs are a mixed bag. The guitar-work is sometimes rote or wanders. There’s the occasional false step - like on “White Light White Heat” where Lou comes in before the guitarist finishes his lead break.

“Waiting For The Man” loses itself in some meaningless guitar affectations but sleazes along in almost cowpoke fashion, thanks to redneck backing vocals. Midnight Cowboy, anyone? "Vicious" wasn't written about The Tots but Reed could have been singing about them, in light of him giving them the flick down the track.

The version of "Sister Ray" here bears very little relation to the orignal.

Can you believe someone calls out before "Heroin" and asks for less feedback? I'm presuming it's a band member referring to the foldback but Jeeze Louise.

The centrepiee is "Walk On The Wild Side", Reed's one and oinly substantial charting hit. It's OK. Bobby Resigno makes a fair fist of Herbie Flowers' iconic bass-line. Drummer Scottie Clark sounds more skittish than a lamb in a slaughterhouse during a drought of veal.

Those backing vocals don't sound like coloured girls as much as a muted version of Alvin and the Chipmunks. At least they're not as nasal as the backing vocal on "Rock and Roll". The song suffers from the lack of a cool as fuck sax solo an an oddly clean guitar solo takes us out. Polite applause betrays familiarity.

“American Poet” (recorded a month earlier from the same tour) is the superior gig, but this is a bargain-priced mail order only job. So if you like "American Poet" you should probably spring for this as well.