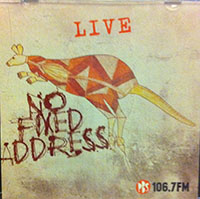 Saw this unexpectedly in Streetlight Records in Adelaide and instantly snaffled it.

No Fixed Address (or NFA, as the Social Security acronym had it) was what every itinerant/traveller/boho put down as their address when they turned up in a strange town and went to lodge their form. Meant they weren't entitled to rent assistance.

The reason this release only gets its beer bottle rating is for the songs - not the memories. Certainly not for the sound - whoever did this was either having difficulties or not paying attention. The bass doesn't dominate like a liquid hot night in Adelaide, somehow to the fore and in the background at the same time; the guitar seems cleaner than I remember it, the pace seems slightly faster (though that could be time playing tricks) and, perhaps Veronica Rankine wasn't playing that night as I can't hear her sax.

Overall the recording is so squeaky clean it lacks the intimacy the band and the songs deserve.

But despite this... is it any good? Fuck, come on. They're young, gifted and Aboriginal, talent rising off them like heat waves, NFA had an intimate, natural grasp of reggae and bent it to their will (astonishing given their age), and there's 14 cracker out-of-time original songs here and they move and groove like a long, slow fuck in the twilight.

When I was a lot younger and just starting to go out to gigs, I had a wealth of knowledge from records and tapes. Thought I knew a lot but knew I didn't know it all. Some bands were terrible. For example, the Recoil were, as Harry Butler correctly observed in contemporary issue of "DNA", shit. Singer Lynton Cox later went on to Die Dancing Bears who promptly split the gig-going public - I liked them, but a lot of people thought they were shit as well.

The things you learn. Steve, Fred, Paul and me would go down the the Governor Hindmarsh, long before its marvellous refurbishment a couple of decades back, and we'd see all manner of bands: The Lounge, Systems Go, Drum Poetry, No Fixed Address. We'd heard NFA on 5MMM FM radio (they'd put out a demo tape) and we were duly impressed, not least by their extraordinarily natural ability to weld reggae into something more modern and relevant.

In an era where there were a lot of bad and iffy bands out there... for a while there (perhaps late 79 - the memory is a tad hazy - but certainly) during 1980, it seemed like we went every time NFA played.

They were really good, had a soft/strong groovy vibe to them, a lyrical and wraparound throbbing bass sound critical to their sound (John Miller), a smart drummer who knew how to spread his beat around the kit and use cymbals properly - who was also that rare beast a drummer whose vocals actually worked - no, hang on, Bart Willoughby had one of those marvellous, yearning cracking voices you hear once in a decade if not less frequently.

Oh, and two guitarists, Leslie Lovegrove Freeman and Ricky Wilson, who filled things in beautifully, and Veronica Rankine who played (from memory, occasional, sax). The entire band was the next best thing to a work of art.

Who could guess that the drummer/singer would turn up in a Wim Wenders film? Clocking Willoughby's Wikipedia entry is instructive - he's been a busy man.

But back to the hear and now... it's great to hear these old classics. "Green House Holiday", "Get a Grip", "Give It Up", "Black Man's Rights" and all the rest. Fabulous. I remember wondering how many covers there were in the set and being told either 'one' or 'none' - the only cover is "Pressure Drop" and that opens the disc. The rest are originals, smart, sharp, credible songs which frankly deserve to be covered by younger bands, a place in the sun and numerous slots in films.

Sadly, I have no souvenirs of those days; no posters, nothing. I didn't tape them (couldn't anyway) though I wish I had. The band took ages to record something we could buy (a mini-LP in 1982, and the soundtrack to a film, "Wrong Side of the Road", with Us Mob), and by then they seemed to have moved, so they didn't hit my radar. And I missed

If you saw these guys as they were, today, you'd be massively impressed. As it is, I only have this recording. I'm glad I bought it, it's perhaps obscure (wikipedia has not been informed) but No Fixed Address Live is brilliant and as far as I'm concerned bloody essential.

Despite not touring or anything for god knows how long, No Fixed Address plays the Spotted Mallard in Adelaide on March 21.