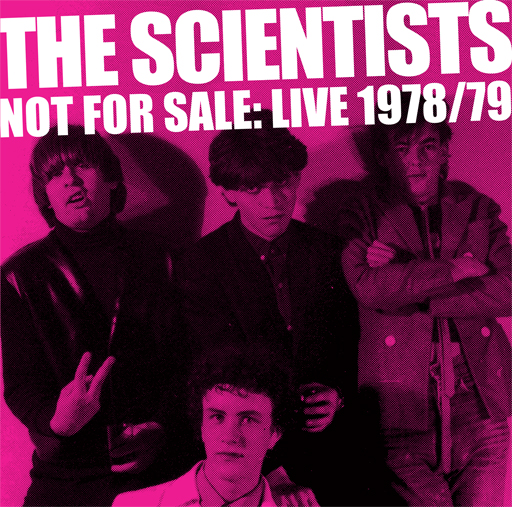 There are supposed to be two types of Scientists fans: those who like the first punky-pop incarnation from Perth and people who like the latter, swampy line-ups that sprang up in Sydney and moved to the UK. Of course that’s nonsense. The world isn’t binary. You’re free to love ‘em both.

Getting a handle on the recorded legacy of either, however, is no easy task. The grunge Sydney-UK Scientists recorded in fits and starts, falling out with their then-record company and seeing their stuff released in forms that did not please them.

You'll drop big money tracking down original vinyl but the output of the Perth Scientists has been reissued several times over in jigsaw fashion. At one stage their legacy did suffer from a poorly produced self-titled record (the posthumous so-called Pink Album) being their only LP. Thankfully, there’s enough out there to give a more complete picture of their sound, to which “Not For Sale” adds much.

“Not For Sale” is a collection of mostly un-issued live stuff that includes some of the Pink Album in unadorned and superior form.  The core is a live-to-air for Melbourne’s revered 3RRR in 1979. Recorded between their “Frantic Romantic” single and the release of their EP, the Scientists are, at times, slightly out of tune but also on fire. It’s Kim Salmon (vocals and guitar), James Baker (drums),  Ben Juniper (guitar) and Ian Sharples (bass). Comic HG Nelson was the MC on this occasion.

The band bounces with ease between their own Heartbreakers-meet-the-Groovies originals and then-obscure covers like “Teenage Kicks”, “Pills” and “Slow Death”. Kim Salmon really was exploding as a song-writer and guitarist. He was Thunders without the slop or a monkey on his back. James Baker was the consummate garage rock drummer - as well as the man with the “lived experience” of the New York and UK punk scenes they both looked to for their influence. The man’s impact on underground scenes across Australia should never be underplayed.

The same line-up is also represented by a bracket of seven songs (“The Loft Recordings”) from ’78 that do justice to the Pink Album. There are more of those songs on the LP edition - this is a CD version and the vinyl has five extra cuts - and they are raw and righteous demos, recorded to a multi-track and cleaned up without losing any defintion. "Bay You're Not For Sale" is one of the great, (almost) lost Scientists songs.

Many regard the Salmon-Baker-Roddy Ray’da-Boris Sudjovic line-up as the classic early Perth Scientists but it was short-lived, although given a second life with reunion shows in the ‘00s. The CD edition presents five songs by them from a boomy but reasonably bright recording at long-gone Perth punk pit The Governor Broome Hotel (taped by no less than fanboy Doug Thomas, who would start Adelaide’s Greasy Pop label.)

The ragged spirit shines through and the New York Dolls parallel quite startling. And you get to hear the Beasts of Bourbon’s “Drop Out” in its original, slower form. There’s an ace rocker called “Kinda Girl” , a brutal pop number “Pretty Girl” and a hand grenade entitled “Make It”. The audience sounds thin on the ground so if you were among its number, count yourself very lucky.

“Not For Sale” is not a bottom-of-the-barrel scraping of sub-par audience tapes but puts a whole new aura on one of Australian underground rock’s important bands.