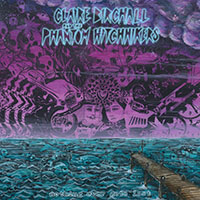 The Phantom Hitchhikers are a band of friends and family (Claire’s sister and other half among them) that plays with an obvious shared understanding of what to bring to each song.

“Nothing Ever Gets Lost” is one of those records that sneaks up on you. There’s a bit of jamming going on, persistent blues harp wailing through a dense mix with keys at the edge and and guitars that wrestle and tug at each other. The songs have depth and show soul, psychedelic and country influences.

Speaking of growing on you, opener “Get The Picture” is a fine case-in-point: Birchall’s vocal lament sets the scene before being enveloped in a swelling cloud of fuzzy guitars and harmonica, a steady engine room labouring away underneath.

“Closing Time” shows the range of Birchall’s vocal to powerful effect. Waves of guitar roll along as she really stretches out. “On High Street” has a swinging, heavy pop feel and a sing-song melody, “Frozen Still” reeks of The Pixies with its articulate guitars and throbbing rhythm. “Secret Somewheres” could be an outstanding Dinosaur Jr album track.

“On The Waterfront” is where the country chook comes home to roost. It’s a restrained charmer and closes the record on a realtively quiet, fuzz-and-harmonies-soaked note. Pass me my Whisky, I need somewhere to cry.

Just remember, Melbourne: If Claire lived in Sydney she’d probably be holding down a 50-hour-a-week day-job to pay the rent, have a fickle following of 30 and play live once a month. Support your scene and don’t let them pave Paradise and put up a parking lot. The CD is on Off The Hip, the vinyl on Birchall’s own Night Owl label.