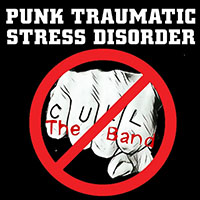 “Punk Traumatic Stress Disorder”  is one helluva a punk rock record and by that I mean it’s everything you want in a punk album: songs full of anger, hate, profanity and, most of all, humor. Yes, humor abounds throughout these 11 wonderful tunes.

Jeff Stephens (ex-Exploding White Mice) was kind enough to drop me a line and talk a little about how some of Adelaide’s finest musicians got to together in Cull The Band:

Cull formed in early 2019. Pete Howlett (Blood Sucking Freaks, Pro-Tools) on guitar, Ben Gel (The Gels, Meatbeaters, Perdition) on bass and W.Shane Forster (Angelik) on drums had been rehearsing for a little while, when Pete asked me if l felt like joining in. For a variety of reasons, l hadn’t played in bands for a long time (apart from the Exploding White Mice reunion in late 2017) and a couple of Barbed Wire Dolls gigs with Pete, Andy MacQueen and Jay Young.) So this sounded like fun. And sure enough, it was and still is!

Our influences are pretty much what you’d expect: Pistols, Dolls, etc plus we’ve done covers of Lazy Cowgirls, Dwarves, Wipers and Dead Moon songs. Basically we’re a punk rock and roll band. Loud, occasionally fast, and frequently drunk. We’ve played with TSOL, CJ Ramone, Hard-Ons, Cosmic Psychos and Meanies, and have upcoming shows with Scientists, Supersuckers, and Mudhoney. We’re playing in Melbourne on weekend of January 6-8 and hopefully heading to Sydney and Brisbane early in the year.

Kicking off side one (that’s right – it’s a record I’m listening to) is a lovely instrumental, “The Cull”.  Nice little opening then, fuck me, “God Forgives I Don’t” makes your ears bleed - Aussie punk rock at its best. Loud and Fast.

“Three Time Loser” is a classic old school rocker with some serious swagger. I Know You Think I’m a Cunt” is next…children, please leave the room for this track. It’s Adults Only, and the lyrics are very funny.

“Spitting The Dummy” is just plain catchy (as the clap.)

Side two kicks off with “Available For One Night Only” which has some wonderful guitar going on. “Burn In Hell” is pure gold. Just listen to this song and then tell me I’m wrong. I ain’t.

“She Knows”: This just simply rocks. The guitar and vocals just grab you right away and make you want to sing along and do silly dance moves. I fucking love this track.

“BBC “is as mean as a dog bite on the balls. i mean, scary mean bass-lines and the vocals are awesome. Also, there is some great drumming on this track.

For “You Don’t Want To Know” I wrote in my notes that it was “riffs, riffs and more riffs”a nd I’ll go with that. It sums this track up perfectly.

And as for “I Live To Fuck You Up” - what a great tune to end a great record. I'm pretty sure it’s Pete The Stud singing this but who knows because no one is taking responsibility for any of the vocals on this album.

Well, I-94 Barflies - this needs to be in every record collection in Australia so get the word out  - Ronald Brown

Go get it here.

As you will have gathered from the title, Cull The Band have something of a sense of humour. Song titles like “God Forgives, I Don't” and “I Know You Think I'm A Cunt (And You Know I Think You're A Cunt Too)” leap off the cover.

The songs? Short, powerful pieces, forceful; rock'n'roll in that classic style with echoes of glam, the Meanies, and half a dozen Australian underground bands (you have all their records). “Three Time Loser”, squint your ears and isn't that a Dolls out-take?

A classic four-piece, with W. Shane Forster and Ben Gel snapping the rhythm section together in a seamless uniform, with Pete the Stud (aka Pete Howlett) and Jeff Stephens on guitar, and Pete handling nicely scrapey vocals.

There's a lot of experience and talent on this record, and it shows. They're tight live, by the by, damn tight. You may recall Pete from The Bloodsucking Freaks, and Jeff from the Exploding White Mice. Those are reasons enough to pick this record up. Ben Gel's EPs I've reviewed here, but he also plays with Perdition and... you get the idea?

If you were to listen to “PTSD”, however, without knowing any of this, you'd hear classic braggadocio and arrogance, bad language and pumping tunes shoved in your face.

Hell, if you heard it blasting from some low-life's battered Toyota, you'd still put your hand up.

Perhaps you think that's slightly unfair? You don't know Adelaide. And, that's where I first heard AC/DC's “Back In Black”, ripping out of a shitty Toyota at a suburban shopping centre, while horrified mums determinedly dragged their kids past, trying to ignore the scruffy bloke in the front seat while the kids, eyes wide, each silently thinking, "I want this!".

Maybe one of those kids was Jeff Stephens. Or Ben Gel. Or Pete Howlett. - Robert Brokenmouth