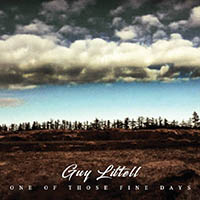 Generally speaking, many Italian bands I hear don’t have a great grasp of the studio or rely on a tiny recording budget (sometimes both), but Littell obviously knows his way around a control room desk. The sound is clear without too much polish, allowing the nuances of the music to shine through. Dry drums and guitars slightly back in the mix are the order of the day.

“So Special” is a strong opener and typical of the simple rock format the album follows. Littell’s slightly quavering vocal wraps itself around the lyrics against a spidery guitar figure. It sounds a lot like Australia’s Cub Callaway and The Revolutionnaires.

“One of Those Fine Days” swings from earnest pop-rock (“Better For Me”) to slightly more urgent rock (“New Records & Clothes”), but most tracks barely break into a canter. A little less restraint might have been good.

Props to Luigi Sabino for the outbreak of guitars on “Don’t Hide” but (at risk of labouring the Matthew Sweet comparison) he’s not Robert Quine. Who is? Closer “Old Soul” features guest guitar from Kevin Salem (Dumptruck, Ya La Tengo) and it’s another stand-out.