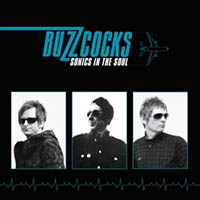 And people can't remain the same, especially if their lives alter. The Ramones changed during their fourth studio LP. People still loved them, too. Really, there was so much love for decades down the front of the Buzzcocks when they toured here, over and over.

Part of that was sheer nostalgia, and a love for the songs. The main songwriter, Pete Shelley, seemed like a shy, almost diffident bloke on stage, yet the songs he wrote made us clutch ourselves like hormonal teenagers. I'll go further and say that, without Steve Diggle carrying on at his side of the stage like a pork chop left in the sun for a few days, Buzzcocks would be pretty bloody ordinary to watch.

Now, their later studio LPs ... well, fans love them. And, there are a lot of terrific songs. A couple of fine albumss, even. If you haven't discovered them, you definitely should.

Mind, I think much the same about the Ramones after their first live LP. And don't get me started on ... no, I'll leave it there.

Danny Farrant (drums) and Chris Remington (bass) have played in Buzzcocks since (respectively) 2006 and 2008, rather longer than the original rhythm section. Power to them, they have given their all. While Mani Perazzoli is now the second guitarist in the Buzzcocks, he doesn't appear on the record, so I'll be fascinated to see how/if the band dynamic will change.

Steve Diggle keeps the flag flying, but he is regarded as the lesser of the two songwriters. This is unfair in many ways, as he's simply a different songwriter to Shelley, and can't be like him, can't write like him. He has his own path to mow. At the risk of sounding like an old coot who can't let go of the past, while this is fine, the original shiny, back-of-the-neck-shivering amphetamine rush of that first incarnation cannot be regained, only revisited.

Listening to “Sonics in the Soul” I find myself reminded of some of the '60s garage bands, of some of the strange ways rock forced itself to fit a genre, only to find itself with multiple new genres. “Sonics in the Soul” is a good LP, don't get me wrong. If you're able to listen to it without the echoes of their first records, you're lucky, because rediscovering them will invigorate you like mainlining caffeine but without the edgy shakes.

Do I like “Sonics in the Soul”? Sure.. Website “Louder Than Sound” describes it as "a riot from start to finish" which, er ... I completely disagree with. “Louder Than War” has struggled and given it a bit of a glum thumping.

Does “Sonics in the Soul” move me like ... well, you know. Nope. However, I expected nothing at all from it and it's better than that.

I'll add two things - first, quite often songs alter and improve in the live environment, and certainly with a new guitarist... Hmmm.

And second, if this LP gets young folk into delving into the past for inspiration, that's no bad thing. Because we need vibrant music, just like we always have.