Written by Robert Brokenbmouth on 16 July 2019. 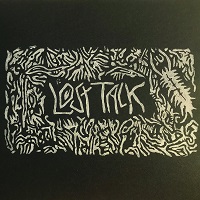 Vinyl only. Not just brilliant, “Tenterhooks” has no right to be this fucking good, this exciting, and (granted) if you're anything like me it’s going to be thrashed beyond recognition, and god have mercy upon your neighbours. Such raw gentle, blaring fucking power and construction.

There are very few times when I wish I had a shitload more money than I do have, and this week is one of them, when I wish I could've gone to Portland, Oregon to see off the very talented, wayward but rather lovely Mike Pitts (of Neptune Skyline and the Kent 3), and to Melbourne this Friday to see off Lost Talk.

After (I believe) 3 years Lost Talk are splitting up, and releasing this vinyl LP as a farewell at their last gig - this Friday night (July 19) at the Cactus Room, Thornbury. (Uh, that's in Victoria. Squidneysiders, book your flights)

You will recall that Lost Talk released "Symbol/ Signal" on Spooky about 18 months ago, and did dreadful things to my iPhone and released me from constipation for a month. I had to carry my shit in a waterproof bag. Four months ago, they released a live cassette/ DL which also burst my banks. I had to have my backside stitched up.

Once more into the (gulp) breach, dear friends...

“Straphanger” opens, and for those of you who remember The Birthday Party (c.1981/1982), or the Pop Group, will hear either distinct echoes of down the ages or, arguably, a band reinventing themselves with flair, attack and the kind of structured mayhem which causes revolution (and, also, unaccountably finding themselves being compared with old men).

I'll tell you now, I wish I could see Lost Talk right now - partly to see how the audience behave. Either they'll behave like apes on meth and fizzy pop or they'll stand back, aghast and agape. Possibly something like both.

It's difficult where to start, frankly. There's just so much in this huge irritable, beautiful, home-wrecking surf of sound. The expertly wielded twin guitar spikes and shrieks, barbed wire tied tight; the gritty rumble of the bass; the punishing drums, and singer Amy's multidimensional voice which she equally expertly wrenches and pushes to elicit every scrap of emotion (there's one song where one single scream rivals “Blast Off”.)

I bet she lives on honey, hot lemon and Strepsils. Inevitable comparison: Amy will remind old codgers of Poly Styrene, and younger codgers of Hole. That's lazy: X-Ray Spex only got one studio LP out, while Hole... pfffft. Amy should be a star (aside from anything else, hearing Lost Talk is a glorious bucket of icy water on a stifling world inundated with dreck like Australia's Got Talent and The Voice) and maybe in time she will be.

Then there's the lyrics, which I won't quote ... get stuck in yourselves.

After four blitzkriegs (hardly “songs”) we encounter “Squab”, the equal of any of Nirvana, Hole or the Pixies' pop songs. Now, I'll just explain that we're not talking about a band which only does ramalamadingdong here, OK? Their songs stop, start, grow, build, develop. We all know the term “twin guitar assault”; Smith & Ducker slip in and out of the groove and back again like runaway trains.

Lost Talk are a profoundly exciting band to hear; god alone knows what they'd be like to behold in the actual flesh, sweat, bone and blood. See Lost Talk while you can - and this will probably be your last chance; once again, we're about to become a poorer country.

Steven Smith, guitar; Max Ducker, guitar; Ben Rose, bass; Amy Mowle, vocals, and drums by Liz Turner and Sam Reid. Remember their names - if you see any of these characters in another band, lose no time, get there.

There won't be many copies of “Tenterhooks” made, so you'd better get yer wallets out and pester Spooky Records here or jump on Lost Talk's Bandcamp.