The Ark - The Vacant Lot (Damn You) 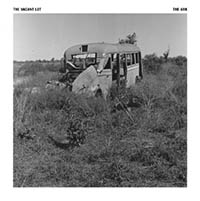 It’s said that the only good thing to come out of Australia’s national capital is the Federal Highway, but it’s not true. Canberra’s also spawned some decent punk rock, and here’s more evidence.

It’s not a hanging offence if you’ve never heard of The Vacant Lot. Molly Meldrum never made their acquaintance either. If he had, he would have hated them. Take that as a plus.

The Vacant Lot grew out of the Australian National University campus in 1978. Canberra had a small but energetic punk or new wave scene by then. Wearing less Detroit leather than Sydney, not as ragged and oppressed as bands from Brisbane and not as artfully smacked out as the Melbourne crew, it was a community that tolerated - no, encouraged - music that didn’t fit with convention.

The Vacant Lot were occasional supports to Sydney’s Thought Criminals. That connection led to them releasing a seven-inch EP on that band’s Doublethink label in 1981. In the best punk tradition, of course, The Vacant Lot promptly split up. Not so much Pretty Vacant as Pretty Defunct. Not that their sound had anything to do with that of the Pistols…

And then along came The Internet. Inspired by renewed connections and the bonhomie of the Canberra Punk and Beyond Facebook page, The Vacant Lot started their second life. This LP comes from recordings made by the reformed band over 2012-17.

Was there a distinctive sound to the bands on Doublethink? You bet there was and modern parallels can be drawn. The Vacant Lot of “The Ark” sounds more like Melbourne’s (late?) Eddy Current Suppression Ring or Wire than anything else. Suburban dystopia meets neuroticism, all wrapped up in primary colours.

The songs are short and sharp, minimalist and nervy. George Howson’s highly-strung spoken/sung vocal resembles that of Jack Boots from the Thoughties. His style suits the songs, which are based on tightly-meshing guitar interplay.

The Holy Soul’s Sam Worrad joined original member Fergus Armstrong in the Mark 2 line-up and their guitars bring a tension to the music. It’s certainly not buzzsaw pop - the guitars twist and flow rather than simply spark - and occasional synth fills some of the gaps. It's punk invented by people who didn't want to enter the Public Service. Coming from Canberra, the odds are that a couple of the poor buggers would have ended up there anyway.

There’s some jazzy chording in “Not Too Real” that recalls the Voidoids, although there’s little in the way of soloing anywhere on “The Ark”. Nick Ketley’s chunky bass lays down the foundation of “Is She Really Dead”, a discordant brute of a song. “Imperfection” is a nagging two-minute attack. Only “Song For Suria” clocks in at longer than three minutes. Its lyrical neuroses and back and forth chording aren’t enough to wear out its welcome.

If ruminating on household appliances never stuck you as fodder for a song then “Whitegoods” will surprise. Unless, of course, you took an awful lot of drugs in your youth and stayed home, in which case it might have been the soundtrack to your suburban life.

There aren’t quite so many musical U-turns in “Journey To The Burial Place” as there are roundabouts in Canberra and it’s oddly endearing. I was going to pull out my old Thought Criminals EP in response before I heard “Electric Chair”. Thios one’s like a low-key Buzzcocks song - from before they fell in love with someone they shouldn’t have fallen in love with - and the younger Devoto would have pogoed in appreciation.

The production is distinctly lo-fi and uncomplicated. “The Aark” has undergone the Mikey Young mastering treatment that seems to be mandatory for any Australian underground album that ends up in the racks at Repressed Records in Newtown. As this one will.

“The Ark” comes as a black vinyl artefact or digital download through Bandcamp - which of course means you can try before you buy. The Interwebs sure are neato, huh?