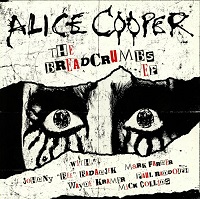 Alice sacked the band and welcomed us to his nightmare.  It was a nightmare that stunk up the stage as Alice went full on Barbara Streisand on barbiturates.  Don't blame disco.  The historical evidence is in.  Punk happened because Cooper began to suck and blow at the same time.

It would only get worse as Alice literally and figuratively went to hell.

Over the decades there have been albums that claimed returns to form only to disappoint as the Coop jumped on any musical trend that caught his fancy.  Most involved the dregs of modern metal riffing but he's crooned to jazz and robot danced to synths as well.

He's played golf.  He was in a John Carpenter film.  And then he got to play the Alice Cooper band in a Tim Burton film.

That may have jogged his memory.

With this EP, Cooper returns to his Detroit roots.  I know he came from Phoenix.  Then Los Angeles.  But things picked up in Detroit.  Why not revisit that fabulous milleu?  Why not try to get a bit of mojo rising.

First of all, the good news; it's not that bad.  It is not that great either but I listened from one end to the other, happy to hear a Wayne Kramer solo hear and there.   There was enough old school Cooper happening to at least remind me of the glory days.  I had to squint but... You get the picture.

Opener “Detroit City 2020” name checks the EP's intent and proceeds from there.  It is not Wayne County doing Max's but it doesn't make you hurl. “Go Man Go” sounds like a lost LA punk era B side that you never bothered to buy because the band sucked and the song wasn't that great.

Cooper's versions of “Sister Anne” and Devil with a blue dress make passable covers but they never hint at the greatness of the originals.  His version of Bob Seger's "East Side Story" might lack the garage growl of the original but it does add a nice sneer to the lyrics.

Probably the best thing here is the cover of Suzi Quatro's “Your Momma Won't Like Me”.  It has some nice gender twisting that recalls the Alice of old and, escaping the original's Stevie Wonder light keyboards, benefits from a more straight rock treatment.

All in all, this isn't a bad way to spend 22 minutes and may be the closest Alice will ever get to his mid-70’s heyday.