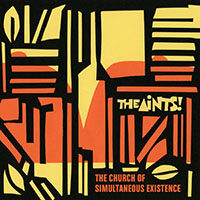 In this case, the TNT being used is a crack band. They’re called The Aints! - I’m told use of the exclamation mark is not negotiable - and they’re reinforced by inspired horn arrangements and a set of cracking songs.

If you’ve seen the band live you’ll already know The Aints! pack a punch. On record, the energy is intact but there’s added depth to the sound, and the nuances in the songcraft are illuminated.

Most of the tunes were written by Ed while the earliest version of The Saints was around over the course of the first three albums. Most were put on cassette tapes and stored in Kuepper’s sock drawer.

“Red Aces” made it to the second record and was terrific in its own right. This version is positively smoking, with its soaring horns and uncompromising rhythm making for a stunning album opener. It rises from a pool of dissonance and launches itself forward like a Panzer formation storming through the hedgerows.

Where Kuepper’s voice was once an acquired taste, these days it’s a well-worn fixture. It’s not Bailey’s slurred snarl but it doesn’t need to be.

Ed’s assembled some memorable bands down the years and The Aints! are as good as any of them. Bassist Peter Oxley (Sunnyboys) is a ridiculously underrated player and his melodic, emphatic lines are a stand-out. New Christ, ex-Celibate Rifle Paul Larsen’s drumming is right in the pocket.

You can - should - savour their playing on every song but pay close attention to the title track where their combined drive powers it to its conclusion, for Kuepper’s guitar and the horns to take it out.

The horns might be all over these songs but Alister Spence’s virtuoso keys add touches of sparkle throughout. Being buried in the live mix if often the lot of a keyboardist but on record he’s a not-so-secret weapon. His tinkling (technical term, used under advisement) makes "You Got The Answer".

I’ll be pilloried for saying so, and maybe it’s an unwitting ironic ploy, but the horn part in “Country Song In G” sounds vaguely like the melody line in Bailey’s “Face In The Mirror”. That similarity apart, it’s also trademark ‘90s Kuepper even if it was written 20-something years before.

“SOS ’75” is an exercise in stürm und dang that could have kept the other songs company on the “(I’m) Stranded” album. The dogged “Good Night Ladies (I Hear A Sound Without)” shares a stylistic kennel with “Nights In Venice” and the connection becomes obvious when Kuepper leans into his first guitar solo. As a dishlicker it’s pedigreed.

You could play the obvious game of guessing which songs could have fitted on “Eternally Yours” versus “Prehistoric Sounds” but what’s more interesting are the contrasts that The Aints! employ.

The odd but compelling “Elevator (A Song For Barking Lord Jeff)” sparks off the elegant “This Is Our Summer”, where Ed’s vocal and playful Alister Spence keys dance around the melody line. “You’ll Always Walk Alone” could be a Western movie theme (probably featuring the Oxley Creek Cowboys) and Kuepper’s guitar shines with the extra space it’s granted.

“The Rise And Falls Of James Hoopnoch Eefil” makes a play for inclusion on the supposed final Kinks album, along with induction into in the Ed Kuepper Obscure Song Titles Hall of Fame. Expansive horns yield to a music hall feel with Ray Davies-like panache. The jaunty whistling arrangement goes cruelly uncredited.

It's out on September 21. Don't be indifferent and be left at the church altar. More than likely, it will be Album of The Year.