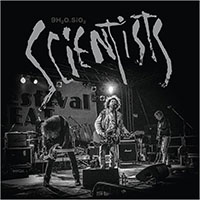 Swamp-funk opener "Hey Sydney" gives the band's old hometown a middle finger ("Memories aren't what thy used to be") and ties tongue-lashing to a wicked feel and a trademark drone undertone.

"Wot's This Game" is a pop song at its core but is wrapped in a cocoon of hard guitar distortion. "I'm Taking It With Me" recalls the jagged rhythms of "Burn Out" and is wholly satisfying. "100 Points of ID" is one of those extended, clever Kim Salmon rants, name-checking past and present drummers in some sort of musical identity crisis set to nagging guitars.

The "Don't mess with the formula/Don't lose the formula" line in "Self Doubt" may be ironic but it's anything but self-perpetuating. Salmon's haranguing vocal hangs over layers of fuzz and an uncompromising feel.

It's said that great things are a sum of their parts and these Scientists surely fit that bill with significant input from all concerned. The simple yet effective rhythms of Leanne Cowie and Boris Sujdovic might lurk underneath all that fuzz 'n' drone but are as integral as those noisy Thewlis and Salmon people.

US label In The Red has released it on vinyl only here.

Will be more? Let's watch where this goes.