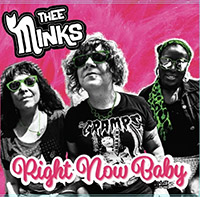 Thee Minks are an all-girl trio that seems to have been around since that other famous Philly son, the late Chuck Barris, was in shorts. They last released an album (“Are You Ready Now”) on Steel Cage 14 years ago, so they’ve outlasted him AND their record label. If memory serves correctly, that album had a song called "(I Wanna) Do a Woggle" so you know that sass and humour are in their musical DNA.

Who are these Minks? Guitarist Hope Diamond is a no frills twanger and blues shouter with a voice that's slighly serrated-edged. Liz Lixx on bass and Veronica Beats (you can guess what she plays) are a straight-up engine room partnership that plays without pumelling. The trio adds some judicious theremin and keys but the sound is garage grunt.  The songs have just enough melody and hooks to make them interesting. They’re like The Pandoras but with more grace.

“Mystery Man” conjures up a killer guitar line and proves that in nine cases out of ten, simplicity with soul and attitude works best. “Perfect” puts its head down and bolts for the finish line. It’s easy enough to dip in anywhere and come up with a good tune. It’s that sort of album. From what I can work out from the little YouTubage around, the record’s an accurate reflection of the band.

There are 12 songs (10 oriignal) and “What a Way To Die” is cover of a song by the Pleasure Seekers, the ‘60s Michigan band that spawned Suzi Quatro. It’s given a party-in-the-studio treatment that suits the tune just fine.

It’s a digital release only but ask nicely via a message through their Facebook or Bandcamp and the band might sell you a CD as a limited run has been pressed for gigs. You do know what a gig is? Yeah, it’s been a while for all of us.