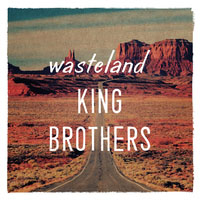 The band's had more record labels than I've had ramen dinners, signing to Toshiba EMI before moving to In The Red and never seeming to sit still. This album's on Germany's Hound Gawd and if that imprint has issued a bum record, I'm yet to hear it.

"Wasteland" is a swirling brew of skronking blues rock. King Brothers' basic sound is infrequently augmented by keyboard washes and accents, harmonica and extra guitar, but the record is essentially what you get live - without the band members throwing themselves off the stage.

Keizo sings in Japanese with the occasional "yeah" but the lyrics are secondary (and if you get hung up on the words, you can read the translation on the inner sleeve.) The propulsive drumming of Zony is a real highlight; don't call him a timekeeper because he's much more than that. Keizo and second guitarist Mayra duck and weave in each others' slipstream.

Edgy slide and a brutal beat make "Bang! Blues" a white hot attention-getter, while "No Want" is a no-frills call-and-response garage rocker with bite. The faltering "Odorushikabane" slows the pace to a stagger and "The Farthest End" switches the mood to trippy psychedelia.

"Break On Through" borrowed its title from the Doors but that's where the resemblance ends. It's a righteous mix of hyperactive drums and alternately stinging and crunching guitars.

King Brothers' version of "Sympathy For The Devil" - or "XXXXX" as he's dubbed on the sleeve - is vaguely recognisable from the original and has to be one of the greatest reconstructions of a classic that we'll ever hear. Zony's accentuated toms and Keizo's blues harp swirl as Mayra riffs away and a cowbell innocuously pings.

King Brothers turn the chorus inside-out and make the Jagger-Richards credit an irrelevancy. If the Glimmer Twins haven't heard this, then they need to before they unleash another record. It might convince them not to try so hard to sound contemporary.

King Brothers have attracted a lot of attention in their 20 years and also the production patronage of Jon Spencer and Matt Verta-Ray. If you want another comparison, they vaguely sound like Jon Spencer Blues Explosion with less jamming.

Available on LP and CD.