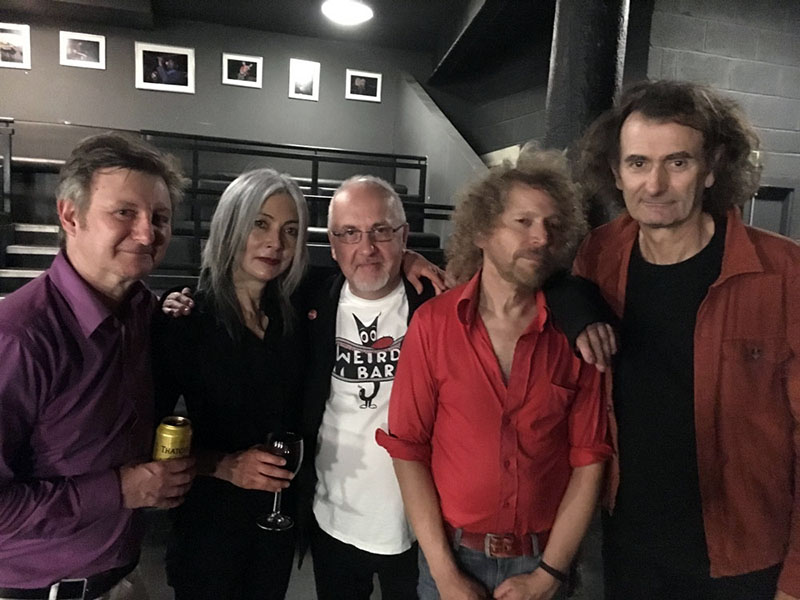 The release of The Courettes “Back In Mono” (Damaged Goods) coincided with the band making it back to Plague Island and somehow waking this dead from the ankles up land mass for a couple of weeks. This album ought to be Amy Winehouse big. It boots that Mark Ronson/Daptone retro app sound square up the jacksy and turns it full Spector-al. Order all of The Courettes records via their Bandcamp page. Ross Nelson has.

DANG!!! released “Sociopathfinder”, a record largely out of step with most other things that seem to have gotten traction in recent times. It sounds old but never backdated in the way it connects 60s and 70s shapes in a blender with a few shots of left field snifters. These Scandinavians, abetted by key guests from across understand the majesty of rock better than most and this something that should have a big stage. DANG!!! will be back for a second season and that monster is currently being revved up with a view to the result being available during 2022. “Sociopathfinder” is on the Apollon imprint.

My most played album of 2021 is by GINBERAS that I discovered via the trailer for a Netflix show called “Sky Rojo”. My gateway drug was a version they’d worked up of a song I since found out has had a trillion YouTube views called “Con Altura” by someone called Rosalia. Their interpretation just had a unique chemistry and down the rabbit hole I went. Turns out their debut album “Ya Dormiré Cuando Me Muera” (“I’ll Sleep When I Die”) consists of nine wall to wall pop gems. Ten if you count “La Cuidada Huele A Sudor” (“The City Smells Of Sweat”) which has a video just to make it even cooler. That last title is on the Edición Deluxe of their album on Vanana Records. GINEBRAS is getting more popular by the day and a friend I alerted them to from The Netherlands recently told me “The sense of pure and non-ironic joy they emit is very contagious”. Absolutely true.

In The Red Records released “Negativity” – the first Scientists record in Forever. It also issued the final recording that Alan Vega made with Ben Vaughn, Palmyra Delran and Barb Dwyer in 2015. Entitled “After Dark”, it continues the pioneering free-form of “Cubist Blues”. I’m pretty sure I’m right in saying that this was Alan’s final session outside of anything he made at home with Liz and Dante.

Kid Gulliver hooked us with “Susie Survived Chemotherapy” and they’ve collected that with all the tracks that have appeared since and made them available on one handy compact disc or download entitled “Kismet”.

Nuevo Catecismo Católico released three singles during 2021 on FOLC Records and theirs was the only show I attended last year. 2022 is their 30th Anniversary and if you never heard them then you’re in for a treat. From Donostia/San Sebastián in Spain, these guys are world beating. Never ambitious in the traditional sense or trying to conquer the world, NCC has been biding its collective time while honing their craft. Bloody marvellous. Many legends have played with them in their homeland and have wondered how the heck they might follow them. Yep, that groovy.

Glasgow’s Primevals keep making music and the listening public need to catch up but that doesn’t deter them. “New Trip” continues their grasp on being trapped in a world they never made. That listenership needs them more than the band needs such lollygadders but some attention beyond the converted is long overdue. I know The Barman approves.

On December 23rd of the 21, A set of Lou Reed demos from 1971 was made available on iTunes and then was promptly removed. The bare bones material is a revelation and will likely be released properly in due course. Apparently this is some kind of wheeze with regard to extending copyright but aside from this shyster behaviour anybody with the slightest interest in Uncle Lou will want to track this down. I’m sure the enterprising among you folks will be able to find it. (ED: I did!)

Rocket Reducer are from Glasgow and they made an album that has recently turned up on Bandcamp. Think The Hellacopters if they germinated in the West of Scotland.

Back to España and the debut by Tiburona: Three Punk Rock Grrrls from Madrid whose statement of intent that is “Sola Y Feliz” (“Alone and Happy”) combines a stroppy spirit with an equally feisty take on what it takes to sound like they mean it. They even have a song entitled “Tura Satana”. That alone should have you itching to hear it. AND You can here.

And a couple for the ‘22:  Sweden's Annika Norlin has an album entitled “Mentor” released by Razzia Records on January 24th. Down in your neck of the woods, I’m very keen to hear the debut by The Prize, Nadine Muller’s post Mr Teenage combo from Melbourne.The live clips from their initial shows sound immense.

All the best for the foreseeable future and beyond, I hope you find something that you like here.

Scotland-based Lindsay Hutton is the former editor of the trailblazing "The Next Big Thing" and "Rockin' Bones" magazines and was head of The Cramps' fan club, "Legion of The Cramped" - from 1980-83, before they shut it down. His Next Big Thing blog is here.