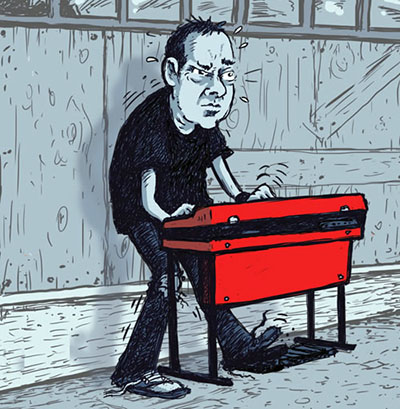 Woody Radio – DJs Gidget and Boris
A non-profit internet radio station based out of Canada run by Gidget and Boris alongside a team of international DJs that plays the best mix of indie power-pop, rock, punk, goth, electro and metal music that you probably never heard of (unless you keep your ear to the ground and finger on the pulse of the up-and-coming bands and artists).

For the past two years, both Gidget and Boris have kept Suburban Urchins in their charts, firstly with the "Born In The Suburbs" album, and Gidget has closed out 2022 with the Zed Girl EP climbing to number-one on her chart. LIsten here.

Suburban Urchins – “Zed Girl” EP
Following up the success of 2021’s debut album “Born In The Suburbs”, the digital-only release of Zed Girl in February 2022 received some great reviews, and the ‘90s Club Remix has been a favourite with underground DJs. We had a lot of fun making the film clip for the title track.. Both releases are available on Bandcamp for streaming and purchase.

Room 101- “Concrete Box/Crazy For You “ 7”
Bruce Tindale dusted off the 1980 recording from Axent Studios in Kogarah, and once I blew the cobwebs off it, it came up a treat, with its raw, rocking, balls to the wall sound! Killer cover artwork by Jim Wylie and foldout poster/RAM magazine article from 1980 complete the package from Lost In Pyrmont Records. Buy it here.

Mick Medew and Ursula – “Love is Calling” album
The Covid lockdowns were responsible for some amazingly creative recordings, and this album is definitely up there with the best. Mick and Ursula have taken their lockdown live stream jam ideas to Brian Mann, who has added rhythm tracks and his production flair to bring together this album which covers a lot of musical ground, from alt-country to synth pop, with a good dose of rock thrown in to help us all get over the Covid blues. Community radio across Australia has given the album heaps of air-time, and Mick and Ursula have been spending time in the van across the eastern states to promote it with live shows.

Infectious Unease Radio Show
Gordon Taylor has been presenting the Infectious Unease Radio Show from 3MDR for over 20 years now, playing darkwave, dubstep, drum ‘n bass, electronica and Gothic tunes to an appreciative and expanding audience, that now gets airtime on a number of international internet radio stations as well. Gordon has been a great supporter of my work over the years, and I’d just like to say a big thank you to him, and if you’re looking for some inspirational sounds, look up his show on the streaming platforms.

Mick Medew and Ursula – Love Is Calling Boxcar remixes
Dave Smith (aka DJ Boxcar) did a bang-up job taking the song “Love Is Calling” into another dimension, channeling  ‘90s dancefloor fillers like Andrew Weatherall/Leftfield, and a touch of the Sleaford Mods to bring it up-to-date. We were all blown away by the response to the remixes, deservedly so.

Popboomerang – “Marching Out Of Time” Compilation
The Popboomerang Records label has been Scott Thurling’s labour of love since 2002, and in those 20 years, some amazing artists have been associated with the label. Many of them feature on this compilation, mostly with unreleased material and studio out-takes. Unfortunately, Scott has decided that Popboomerang has run its course, and is now focused on the Sound as Ever collective (see below), and this compilation was effectively the “It’s been fun, but goodbye for now” love letter to the last 20 years. A worthy release for Scott to hang his boomerang on.

Sound As Ever – "Hanging Onto The '90s" Compilation
This is the fourth compilation by Sound As Ever (following on from 2021’s “Loud As Ever” release), revisiting some of the stand-out unreleased tracks from a wide collection of Australian indie artists from the 1990’s, and is a dizzying dive into the era, crossing as many genres as there are artists, superbly curated by Scott Thurling and Jane Gazzo. Let’s hope for many more of these compilations, which are both a definitive historical statement, but also a great collection of ground-breaking music from all of those bands and artists that we knew and loved when we were all a bit younger, slimmer and stayed up much later.

Honourable Mentions:
Greenhouse – “Full Circles”
OK, this was released at the end of 2021, but I was so blown away by the quality of the material, I couldn’t let this go with a mention.  Michael Robinson’s voice, the jangly guitar interplay, and the powerhouse rhythm section gave these early 90’s songs a distinctive radio-friendly feel, and their FM appeal was undersold at the time (band/label/management politics and the fickle station programmers had a lot to answer for). Greenhouse are back now with new material , be sure to check them out.

The Silverbeets – “Mr Brown’s World Sized Prison Cell”
I have been involved with this amazing Tasmanian “Psych-pop” band for over 10 years, three albums and an EP now, and they never fail to come through with something fresh and exciting. On the heels of 2018’s “Stay Tuned” and 2020’s “Halcyon Days”, the next album has taken many twists and turns, but is getting closer to completion. Worth keeping your earballs open for it with an early 2023 release date.

FOOTNOTE: The Urban Fringe Compound in Melbourne is getting an update in 2023, with a purpose-built studio currently under construction, hoping for completion by July, with a much larger space, full acoustic treatment, incorporating the classic 1980s Ward Beck Systems console into the workflow, and a comfortable booth with all of the bells and whistles. There’ll even be room for my racks of analogue keyboards, reel to reels and quirky old amps.