The original version of the New Christs never made it out of the studio - if you could call the front room of an inner-Sydney terrace a studio - but left a nugget in their wake. Even the self-effacing Rob Younger admitted the 1981 single “Face a New Good” b/w “Waiting World” had a “nascent charm” to it. The line-up was future Hoodoo Guru Bramley on bass), Bruce “Cub” Callaway on guitar (a post-Kuepper Saints member and future Ed Kuepper sideman), future Died Pretty keyboardist John Hoey and Don McGloneon on drums (ex-Bedhogs.)

“Face a New God” features an uncoiling guitar, dense mix and a bed of organ while “Waiting World” employs a similar sound and sung-spoken lyrics about being trapped “in a room with dying friends”. Both cuts are absent from “Divine Rites” and would have sounded out of place, given that they’re so sonically different to the run of 45s that followed.

The first live line-up of the New Christs surfaced in 1983 and was peerless while it lasted. You may already know the back-story: Rob received an offer to support Iggy Pop on his debut Australian tour but was band-less. The Hitmen were on hiatus and offered a lean, road-tested and mostly familiar line-up in Chris Masuak (guitar), Tony Robertson (bass) and Kingsmill (drums). Add Kent Steadman from the Celibate Rifles on guitar and you had a potent combination with enormous power, swing and a caustic edge.

It’s said absence makes the heart grow founder and Younger’s return to stages was glowingly received. The New Christs often exceeded the headliner’s impact on that lengthy tour, and the sidelining of the Hitmen after a near fatal car accident involving their singer meant the band would kick on after the Iggy run ended. Lime Spiders member Richard Jakimyszyn replaced Steadman, who went back to the Celibate Rifles.

The first four tracks on “Divine Rites” were recorded in 1983 but took until the folowing year to surface as singles, by which the line-up was no more. That’s Masuak, Jakimyszyn, Robertson and Kingsmill you’re hearing, with a guest spot from Steedman.

The ragged riffing that propels “Like a Curse” explodes from the speakers like lava erupting. Pupportedly inspired by the early Kinks - at least from Younger's perspective - Masuak reels off  what would become a trademark solo, based on Eastern scales. “Just having fun on a Strat,” is Masuak’s summation.

The studio sound is harder than diamonds and the precision brought to bear by the Robertson-Kingsmill engine room inspires awe. “Ahhh…I think I’ve had enough,” Rob declares as he dismisses the song at the death. Speak for yourself. The only regret was that the release was posthumous and the band was no longer kicking around the pubs putting on shows that remain burned in my mind and those of many others.

The B side, “Sun God”, is almost as great. It’s a frantic collision of guitars and brooding attitude that knows more than it’s letting on. Yes, Younger intones, "there is a god of surf and sun and sand…inside the heart of every man”. The lines are delivered with a bucketload of irony when they come from someone with a very practical aversion to the sun.

So, is it a “fuck you” to mirror-shade wearing posers or a potshot at someone else again? It could be either - so “big deal, baby”, as the man says. He lovs to keep you guessing. Adopting different personas and throwing up contradictory concepts are the beauty of Rob Younger’s lyrics. Plus, most of them generally contain enough venom to cripple the staff of a medium-sized snake farm.

“Born Out of Time” and “No Next Time” were the other fruit from the ’84 Trafalgar Studio sessions that apparently spanned some days. There may have been other tracks demoed, but they’re long lost in the mists of time. “Born...” persists in New Christs set lists till this day.

“Born…” is one magnificent, uncoiling beast. Kingsmill and Robertson come out swinging with a magnificent feel and the guitars sting like hornets. Dynamics abound in the song's rises and falls and it underlines this band’s greatness. The middle section is hilarious: Masuak and Jakimyszyn spar on guitars before Steadman wanders in with a flurry of scuzzy notes. They’re all dismissed with a Younger command to “shut up” before he inserts hiw own verbal knife.

Younger’s vocal is one of his most malevolent ever as he kisses off yet another fucked-up lover (“She can keep her filthy habit/She can shove her fucking pills”.) He seems not without blame, however, when he let's slip that he’s “living out my time…my karma’s in the red”. One day we will understand.

“No Next Time” is a survivor from Other Side days, and what seems to be a song about share house migration serves as a metaphor for Younger moving on, musically speaking, and leaving a host of followers behind. It’s a musical boneshaker with the band locking in like a machine.

The next six tracks were recorded by a completely different line-up of Younger, Charlie Owen (guitar), Jim Dickson (bass) and Louise Burdett (drums). Louis Tillett contributed some organ and Dickson did some of the writing. By now, Younger was more than comfortable in his production skin. 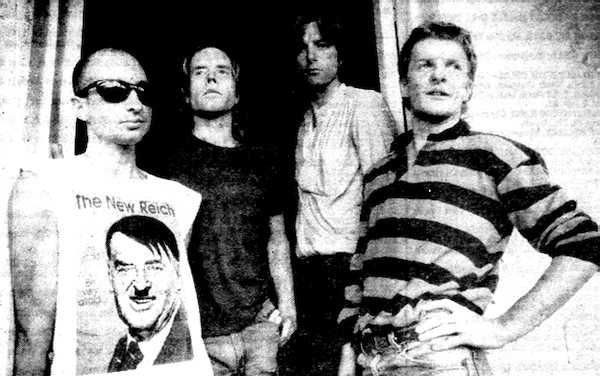 The recordings would mark the first substantial release featuring the mercurial talents of a then-unknown Charlie Owen, as well as the return to relative prominence of ex-Survivors, Passengers and Railroad Gin member Jim Dickson, back from a stint in London where he’d played bass for the Barracudas.

“The Black Hole” is a menacing blues-wail rather than a balls-out belter. Based on Owen’s commanding sustain guitar and Younger’s doom-laden vocal and lyrics about sex, it’s a mysterious or slightly harrowing trip (depending on your state of mind) back to the place from where we all came. Dr Freud would have loved it. Playing it live presented occasional challenges, especially for the guitarist who sometimes battled his own road-weary gear.

“Addiction” might be regarded by its writer (Younger) as something that was tossed off, but those lyrics about golden showers and “other useless things” pre-date Donald Trump’s dalliances in Russian hotel rooms by many years. Owen’s scorched earth guitar and the adroit yet aggressive playing of his bandmates place it many notches above the innocuous tripe that was being played on Australian radio.

The next four 1987 tracks – “Dropping Like Flies”, “Dead Girl”, “I Swear” and “You'll Never Catch My Wave” – are sequenced as they were released (as a double 7” single pack with picture sleeve, no less.) “Dropping Like Flies” was another stylistic departure from what some audiences wanted to be the norm – which underlined the flexibility of the latest line-up, which was by now benefitting from extensive roadwork. It’s a slow blues lament with scarifying slide guitar about (another) dead relationship. No wonder someone invented Tinder.

“Dead Girl”, I’ve always found to be one of the lesser tracks, but it’s brought to life by some effervescent Owen guitar. “Ï Swear” is another twisted relationship story set to a hard rock soundtrack and a bit of a singalong, live. Owen’s guitar is again a stand-out and the engine room of Dickson and Burdett comes into its own with a fluid, driving feel.

Burdett would depart to b replaced by Nick Fisher, a formidable talent in his own right. and it's this line-up that playd on the next single. “You’ll Never Catch My Wave” is a fun mutant surf tune, predicated by a Younger call-to-surfboards and, again, riddled with irony. It's light relief in the way "Divine Rites" is sequenced.

The order of the final two tracks is flipped from their vinyl A and B side configuration: “Ï Saw God” is fast and furious, with a simmering breakdown before it resumes hostilities. Owen’s guitar drills like he’s a dentist or he's taking out his frustrations on one.

“Headin’ South” is a ball of fun - a brassy and bold blues romp that’s completely at odds with the original single cover art (an apparently bloodstained handbasin, that could have been the aftermath of a suicide attempt or just someone cutting themselves shaving.)

The band locks into an enormous, grinding groove with full-blooded accompaniment from Diane Spence on saxophone, Glad Reed on trombone and Kathy Wemyss on trumpet. Rob’s American Indian whoops might be deemed cultural appropriation in these more uptight times, but they signal a man on the warpath as he takes flight from whatever (whoever) is holding him hostage.

Of course the New Christs didn’t have a hope in Helensburgh of being played on commercial radio off the back of this single, but Triple M’s rogue breakfast DJ Doug Mulray did throw the dog a bone by using a couple of seconds of “Headin’ South” in a “sting” to punctuate his program. The cheque is undoubtedly still in the mail.

This album is as close to essential as they come if you were steeped in the Sydney scene of the mid and late 1980s or just wish you were. It also provides foddr for debate about which line-up constitutes the “definitive” version of the band.

You can stake a solid claim for the “Distemper” crew, the “Hitmen on holiday” version (my personal fave) or the current, enduring line-up. The "Lower Yourself" version was pretty special, too. All were (are) very different to each other. “Divine Rites” showcases the first two live incarnations and underlines that while both mopped the floor with almost anything else around at the time, they also had so much potential that went unrealised.

“Divine Rites” is long out of print, but eBay and Discogs occasionally throw up copies. A cheap one was spotted on Amazon the other day. There was a vinyl version that only compiled the earliest singles, so caveat emptor before you put your virtual money down.