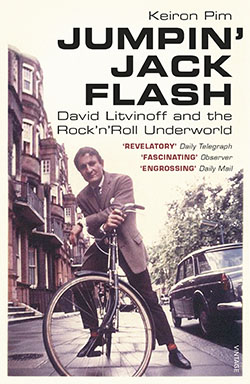 If you've ever wondered what it's like to write a book about someone who left little physical trace save exaggerated and legendary memory, "Jumpin' Jack Flash" is the book you need to read.

At no time, however, does Pim's self-conscious obsession obscure the actual topic at hand, this multi-metamorphosing man, whose braggadocio and street-knowledge got him damn near killed on several occasions. I mean think of it, he's homosexual, knows more about the blues than most of the r'n'b musicians in London in the 1960s, is a conflicted Jew who's a borderline anti-semite, borderline radical Israelite.

As with Steve Jones' autobiography, but MORE SO, half the time I'm wetting my pants with laughter, the other half I'm in awe, and the other half I'm hooked and horrified. He was a dead-set prick and a wildly generous man, seer, philosopher, raconteur and utter fucking madman.

'Thank God', you'll think, 'that I never ever knew this bastard.'

Do you have an interest in the 1950s London crime gangs?

Do you have an interest in the 1960s London music and culture?

Do you have an interest in the 1970s Sydney art and underground?

Last thing I'll say is that he resembles no-one else than Neal Cassady with serious issues. Neal was far less flamboyant, while Litvinoff was ... full-tilt, a Jack Kerouac series waiting to happen.

Weirdly, some of the funniest moments, and the most poignant and tragic, are those we encounter as Pim crosses countries and oceans in pursuit of his elusive will o'the wisp subject. The scene with the Sydney taxi driver is arguably worth the price of admission alone.

Don't argue with me, ya prick. Just get it.