Written by Robert Brokenmouth on 05 November 2017. 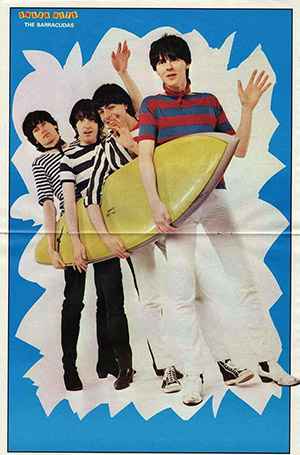 Lisa Simpson, long-time reader of "Non-Threatening Boys", would have snapped up "Smash Hits", and probably the Barracudas’ many singles (and a few LPs) with a vocal reminiscent of Dick Dodd of The Standells. They appeared on real mainstream radio, real network television, and bounced about like they meant it. 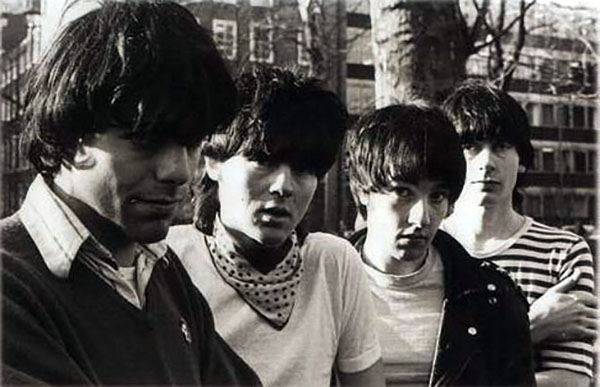 Hell, looking back, you realise that the Barracudas compilation LPs out-number their original LPs by far, so The Barracudas well and truly fall into that category of (usually 1950s or 1960s) musical artists who are repeatedly reissued, in a multiplicity of forms because … well, it’s the industry … damn, they even did a song called ‘I Wish It Could be 1965 Again’ …it’s 1965, ok, all across the USA…

If Lisa had snapped up The Barracudas more serious interviews in the weekly music papers (c.1979-1984) she would have noticed either a change in the band or … some sort of serious intent behind the fuzzy wuzzy happy bappy funtime band whose lives are always centred around that bright buzzy guitar pop. Songs like "I Can’t Pretend", "Violent Times", "I Saw My Death in a Dream Last Night" (not a top popper, let me tell you), their cover of "Codeine" and, in the quite, quite self-aware, "This Ain’t My Time"…

An' my belly is craving, I got shakin' in my head
I feel like I'm dyin' an' I wish I were dead
If I lived till tomorrow it's gonna be a long time
For I'll reel and I'll fall and rise on codeine

Because they also clearly had serious 1960s garage roots, The Barracudas could be perceived as bridge between '60s garage and the garage of the '80s and '90s - perhaps a bit like the Milkshakes. (Curiously, the main man behind the Milkshakes, Billy Childish, is also a man of many talents - publisher, artist, writer.)

How did all this start? I mean, Gluck grew up in Ottawa, which was hardly the centre of the universe (I’m starting to wonder about Chris Masuak here, how the hell do you go from the boonies to … ? never mind.) mudkiss.com (operational 208-2013) did many great things, and one was having Jean Encoule score an interview with Jeremy Gluck, from which I shall now pinch a few quotes:

[Radio] was an enormous influence. You can’t imagine now how important it was then, it would seem sentimental to get into it. There were some good local stations, like CFRA, that played the Top 40 – I remember calling them like crazy in hope of my “Bang-a-Gong” request hitting paydirt. But the best was on FM. The night my top FM DJ played all of ‘Quadrophenia’ days before its release was one of many highlights. At night through the crystal clear winter skies I could tune in dozens of American stations, and discovered a lot of music and madness that way. Radio is magic: the first time I heard a record of mine on radio (John Peel show!), it was an epiphany.

But if all you’ve heard of the Barracudas is their shiny pop, here’s a bit of background:

… my older brother, David, was my musical mentor. He’s seven years my senior and was a real kid of the Sixties. He saw the greats – Hendrix, The Who, you name it – and I grew up aware of not only the hits, but also stuff like the Mothers, The Seeds and much else weird and worthwhile.

In my teens record stores had tons of amazing deletions. I got The Stooges albums for a few bucks each, ditto MC5; the list is endless. I was aware of some stuff, like the seminal BOMP! singles. … Robin [Wills]’s collection of early “Pebbles” compilations hipped me to the post-“Nuggets” garage revival that The Barracudas dropped into. We shared a love of The Beach Boys, garage punk and power pop. We loved the stupid, the obscure and the unsung . . . and the Flamin’ Groovies! … I didn’t get into The Saints and Birdman until I hit London. Robin and I were in Berwick Street Market and met Deniz Tek and went to see Birdman and the Groovies. Now that was a gig!” 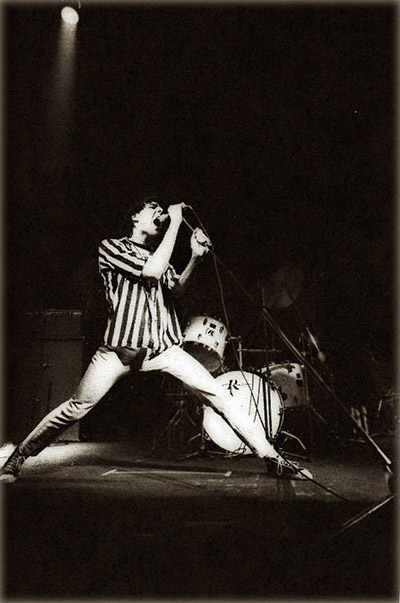 Was Jeremy (not "Jerry", as I know you’re longing to think of him in the non-threatening boy context) going to keep himself fashionable and grow ‘big 1980s hair’ like Robert Smith’s upside-down gorilla scrotum?

Er, well, no. The Barracudas developed into several directions (none featuring massive hairspray) but, given that they were both behind the times and ahead of the times all at once and also (apparently) afflicted with inept manager syndrome, their end came all too soon. What were Jeremy’s first feelings after splitting?

Denial. Both fate and destiny can be a major pain in the ass. And so it proved in this case. Once the denial wore off I was devastated.

From there, Jeremy proceeded with many musical activities. For example, the LPs "I Knew Buffalo Bill" (with Rowland S. Howard and Nikki Sudden), "Memory Deluxe: I Knew Buffalo Bill 2" (with Robert Coyne) and projects the Carbon Manual and Plasticon to name a few.

I mean how do you find time to be a cult recording artist, songwriter, lead singer, and electronic music composer, who’s collaborated with innumerable artists including Lydia Lunch. Fair suck of the sav, Gluck’s active presence on cult rock'n'roll and underground electronic music overlaps two centuries.

Not content with being a musical troublemaker, the endlessly creative Gluck began to dabble in art. First painting, then photography and digitisation.

So, What happened after the Barracudas? isn’t the question. The question is: How did you find himself with a professional biography which describes him as “a fine and digital artist rooted in postminimalism and digitalism, working in painting, film and mixed media, currently developing collections of digital art memes called "The Human Beings", "The Unbeings" and "Nonceptualism", the latter based on an art manifesto he has authored.”?’

Is that a thing?

Gluck is the author and founder of the Nonceptualism art manifesto (inspired by the late Gustav Metzger, pioneer of auto-destruction), whose rallying cry "ART IS OVER! IF YOU WANT IT" is being heard around the world. 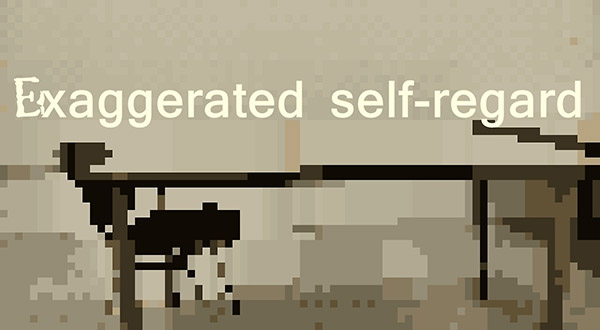 “Nonceptualism is about the (an) end to art, and the end of the idea of an artist in self-concept and conception and execution of work, as we and consider it...but maybe it's also my way of saying, It's about an end to some or all of me as I've conceived myself since conditioning began - as it does with all of us - not long after birth. Which I like…”

Fuck. I mean, I thought this was a classic 1960s immersion band. Nope, not when you read

, which is a link to Gluck’s Manifesto of Nonceptual Art, read by Molly Bloom.

William S. Burroughs has always been a pervasive informing presence in my creative work of all kinds.

Unterzone”, as a poem and video (the title, acknowledges Burroughs’ fictional Cold War limbo, Interzone) is a ‘holographic’ piece, about an invented but also viscerally real “place”. I am in and of it. Combining the voice piece with footage of my beloved alley by night, and a B&W 50′s American public education film on the behaviour of rats, the “Unterzone” video is both bleak and somehow beautiful. The spoken word is delivered in the style of a hypnotic induction (I learned hypnosis as a teenager and experimented with it a lot, especially self-hypnosis).

Crikey. Does this make any sense? 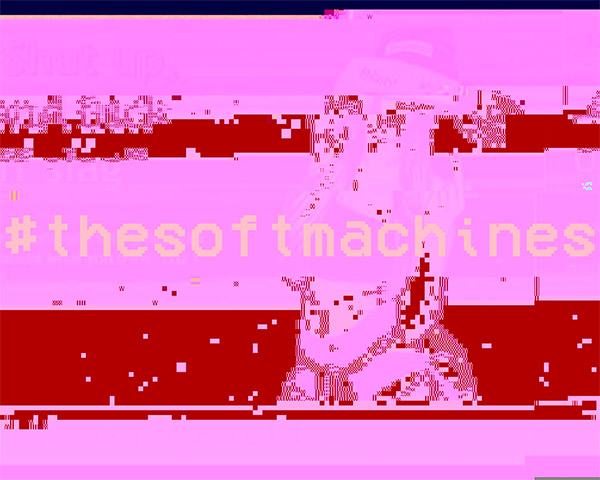 Well, the surface of Gluck’s art is one thing. The depths of it are striking, but you do have to spend a bit of time.

In parallel with the very impersonal, “cold”, “clean” digital art I am creating in volume, I am perhaps moving between conceptual and what I could call “self-conceptual” work, “Unterzone” being a bleak and stark expression of the latter.

This disinterring of aspects of my “identity” (words like this are so conditional they are misleading but for want of anything better…) will be an intriguing exercise. Already, “Unterzone” is one of the most powerful video pieces I’ve done. It answers very much to a sense of alienation and sometimes isolation that has been the basis of much of my artistic work.

Paintings are too hard. The things I want to show are mechanical. Machines have less problems. I’d like to be a machine, wouldn’t you?

What a dick. Warhol, that is.

Seems there’s something of an overdue backlash to the Warholian nonsense which has corrupted the art world - and the rest of us - for the last half-century. We’ve laid back and let the machine people take over. When John Foxx sang ‘I want to be a machine’, it wasn’t deadpan humour. People got it: if you were a machine, you didn’t have any emotions, or moral decisions to make.

Gluck isn’t the only one making art which refutes this right now, but Gluck’s in one of a handful whose work is the most original, striking and evocative. I suspect it’ll last a lot longer than most - and with a bit of luck, Warholism.

The context is that basically, #thehumanbeings vain imaginings that Nature suffers from our actions are deluded. Nature is suspicious, not stupid. In its thoughtless, egoless steady state, it is aware of us, as an elephant is aware of ants. We cannot harm Nature. We are meatware ephemera. That’s all. My gestures deliberately allow Nature to eat the technology we are so afraid can compromise its integrity.

Here’s a link to a recent article. 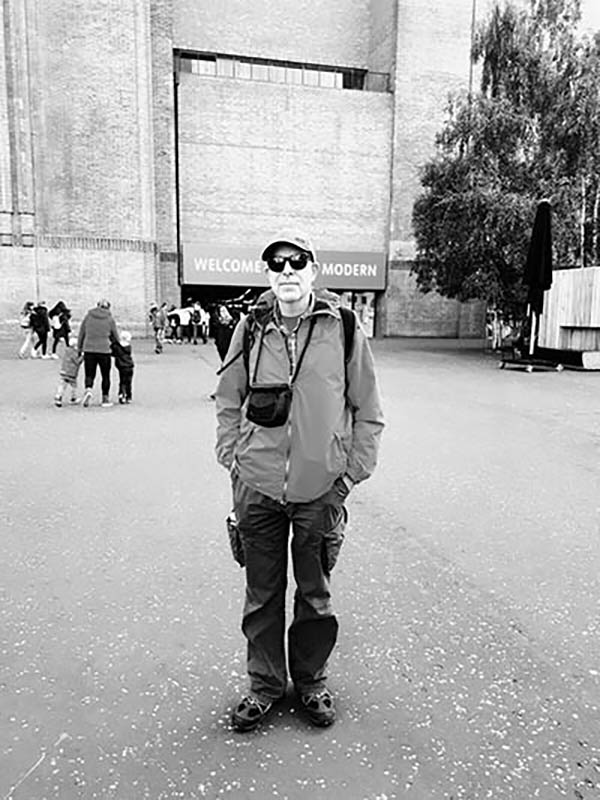 Jeremy Gluck’s next exhibition is "The Student Beings" and runs from November 11-24 at Vinyl Deptford (that’s in London); there’s a Facebook event page. After that, the exhibition continues at The Hundred Years Gallery, London E2 - an expanded exhibition of related work opens in July at Lewisham Arthouse, London.

In the mean-time, I suggest further explorations are in order; Gluck’s music is human, real, and better for you than Netflix.