Sonic's Rendezvous Band: The One That Got Away - GARY AND ROCK 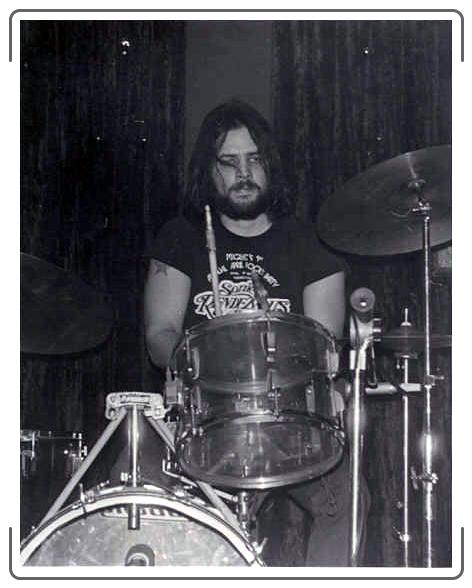 It was Scott Morgan's idea to bring in ex-Stooge Scott "Rock Action" Asheton on drums.

SCOTT MORGAN: We figured since Scott was no longer with the Stooges and we needed a drummer, we should get him in the band. He didn't have any drums. After the Stooges broke up in Los Angeles, he had stayed there, and he was staying in Ron [Asheton]'s apartment, which was also at the Coronet, the same hotel where James and I were staying. A friend of mine, Doug Curry, was James Williamson's roommate, and Ron had another apartment, and Jimmy Recca [ex-Stooges bass player] was staying there off and on, and Dennis Thompson was staying with Ron, I think...they had a band [New Order] in Los Angeles. Scott had nothing but his drums, and he was sleeping on Ron's floor behind a chair, and he sold his drums to Dennis for a plane ticket back to Michigan, so he had no drums. He came back, he had NOTHING to show for the Stooges, and was just sort of hanging around.

RON COOKE: When Scott [Asheton] came in, that's when it appeared that Fred was trying to come out of his basement. To try to get Fred to get out and go do a gig was like pulling teeth! Oh, yeah. Where he got the name "Sonic" from, I don't know. That was like the opposite end of the world. So when Scott got in the group, Fred Brooks got hooked up with Fred, and Brooks started to try to put some gigs together. We weren't actively out trying to get gigs. For Fred to cut a deal with somebody to go out and say, "Hey, get us a gig" - that's six to eight WEEKS of negotiations, and there's nothing there to negotiate, y'know what I mean? So I guess Brooks started getting us some gigs, and that's when Scott came in and we played a few gigs.

One fan who witnessed many Rendezvous performances was Deniz Tek, an Ann Arbor native who'd carried the gospel of the Five and the Stooges to Sydney, Australia, where he was attending medical school. In the mid-seventies, Deniz and his band Radio Birdman were remaking Australian rock in the high-energy image of late-sixties Detroit.

DENIZ TEK: One of the things that I felt was the best about that band, the thing that defined it, was Scott [Asheton] on the drums, because he hit the kit SO HARD it'd shake the room. You would not think that any drum fittings could be made [that were] good enough to withstand that kind of punishment. He was like that. He had a very simple kit; he always had Ludwigs, snare, one rack tom, one floor tom, hi-hat, crash, ride, and the bass drum - that was all. But he was just WHACKIN' them, with PERFECT time, and just driving like a big train - it was awesome!

The last piece of the puzzle fell into place because of Ron Cooke's affinity for motorcycles and his inability to get along with Scott Asheton. Gary Rasmussen had just left Uprising, the band which evolved out of the Up.

GARY RASMUSSEN: I had gotten fired from Uprising, and I was really looking for work, going to Detroit a lot and hooking up with different musicians, trying to put bands together. At that time, it seemed like everyone I would hook up with, there was always some reason it wasn't really happening.

The Sonic's Rendezvous thing, I guess we went in and out of that thing for a year and a half, two years. Then I guess other things caught my mind, I was doing other things in my life. I'm the kind of guy that if I was involved in something, sometimes it wasn't always the best thing for me...I really got gung-ho on some of these things. As far as me goin' in and out of the band...if you're not enjoyin' what you're doin', you don't do it anymore.

SCOTT MORGAN: Ron's a biker, he's a Harley guy, and he was riding with this group called God's Children, who had been security for the Stooges, and he kept selling his guitar and buying a new motorcycle. He kept goin' back and forth -- "Oh, I'm gonna sell my guitar and buy a bike!" And then he would borrow Gary's [equipment]. Scott and I had been hanging out with Gary. We wanted Gary in the band. Scott and Ron didn't get along. Ron and I got along pretty well, but Scott and Ron are two fire signs and they were always at each other. So we thought Gary'd be a good sub for Ron. We'd known Gary from the Up, we were old friends and stuff.

GARY RASMUSSEN: Ron Cooke was coming to my house and wanting to borrow my equipment, because he'd pawn his bass and buy a motorcycle, and he wouldn't have any equipment. So then he'd come to me and want to borrow my stuff, and I think I did actually loan him things a few times, but I didn't really wanna be doing that. Here's my stuff, and here's this guy going off playing, although I knew all those guys, it wasn't something I felt great about.

SCOTT MORGAN: The last time he did it, we had this gig in Bad Ax, Michigan -- it was like an outdoor festival -- so we were gettin' ready for the gig, it was just a few days away, and Ron calls and says, "Hey, can you find me a BASS? I sold my bass to buy a new bike." So Fred just got fed up.. [Ron] tells me that, and I'm goin', "You better talk to Fred." This is at my parents' house, and I hand the phone to Fred and I'm goin', "You gotta talk to Ron." So he gets on the phone and he's going, "Yeah. Mmm-hmm. Okay." Turns around and says, "What's Gary's number?"

GARY RASMUSSEN: I think part of it might be because Ron Cooke was used to playing with Johnny Bee, and Johnny Bee is like a monster -- STILL one of the greatest drummers in the world. But Ron Cooke and Scott Asheton didn't get along really, so I think it was really Scott Asheton and Scott Morgan [who] started telling Fred, "We should just get Gary to play." So Fred called me up one day and said, "What are you doing next weekend?" and I said, "Nothin'. Why, what's goin' on?" He said, "Well, I'll send over a tape and we got this gig next weekend if you can do it." So he sent me a tape and that was the beginning! Playing in Bad Ax, Michigan -- it's up in the "thumb." That was 1976...I think spring of '76.

SCOTT MORGAN: So we called him and he rehearsed with us and did the gig, and it was a great gig! Went really well, people loved us, sounded good, and there was a big crowd there, so we figured this is definitely...he was in the band! From there on out.

GARY RASMUSSEN: We were playing bar gigs, and not all that many, especially at first. Maybe some friends would have a party, or a few clubs that would hire us once in a while, we'd get some club somewhere, and a lot of times when we'd go to play, the reaction we were getting was NOT "Oh, this is the greatest band in the world!" It'd be more like people goin' "What the HELL is THIS? It sure is LOUD!"