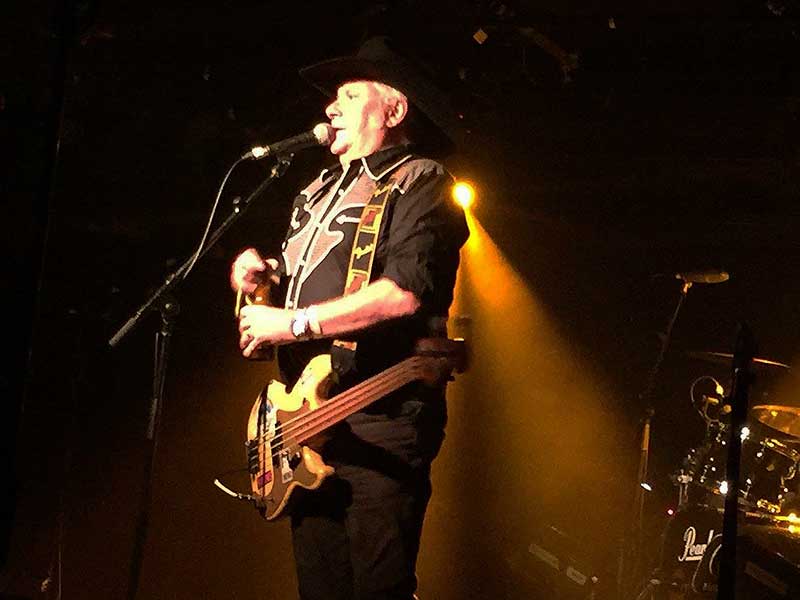 The Johnnys bassist Hoody and the pause that refreshes.

I knew Spencer was not well, and noticed he has hardly played gigs for some time.

Last time we spoke, we were watching Johnny Casino at the Retreat Hotel; Spence is like that, a music geek who supports the scene, and also who takes also an interest in what you are up too when you speak to him.

Everyone personally likes him. And personally, Melbourne is my home away from home. I head there at least three times a year. If Spencer and his band The Escape Committee is playing I am there. One of the most fair–dinkum and solid bands in the land with a collection of songs that are par with anything around, and they have been for a very long time.

Now the Melbourne scene that has been his home for decades supports Spencer. When I heard of the benefit (one of many around the country), I rang a close friend and straight away scored a ticket. The lineup was amazing. The Johnnys, Ross Wilson, Adalita, Tex Perkins, Charlie Owen, Tim Rogers, The Drones, and The Escape Committee.

We line up around 8pm and already the queue is around the corner along Fitzroy Street: the Prince band room is already completely packed. It sold out within hours, months ago, I have to say, that is amazing. I have never seen a gig so packed so early: well not since the ’80s. There is next to no fresh air in the room, and it’s a good ten degrees warmer than outside.

I have already missed The Pink Tiles. And I walked in and managed to fight the line the at bar that’s five layers thick. Renee Geyer walks on stage. Renee with Ross Wilson really represent the music from eons ago from 2am smokey bars and a once flourishing and vibrant ‘70s blues and jazz scene: when I was wearing socks and shorts and listening to ABBA, I have vague memories of Renee on Countdown and this was the first time I am to see her live. As Geyer hit her first few notes, I realised I was seeing an artist of a remarkable talent.

I found a quote that Renee about her that really summed her up "a white Hungarian Jew from Australia sounding like a 65-year-old black man from Alabama”. Her voice is rich bluesy and soulful with simple guitar and a laid back vibe fills the venue. I had no idea that Renee has consistently been putting out albums since the early ‘70s and has 30 long-players in her body of work. In fact, I must buy some. Geyer finished her short set; it was way too short in my opinion, with a slowed-down James Brown song belted out with passion and soul. 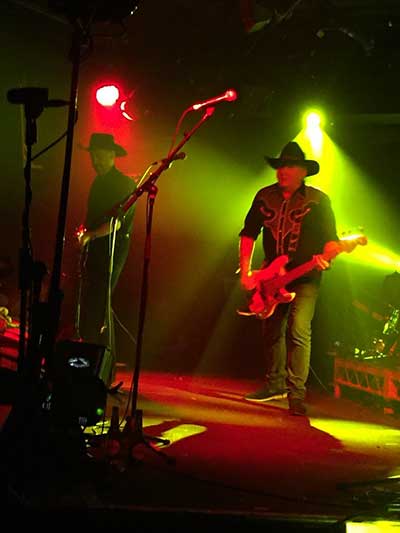 There was an expectation that You Am I was appearing and later in the night there were a few complaints. Instead, one of them takes the stage as a makeshift band under the name The Draught Dodgers. Following Renee Geyer would be difficult task for any act.

You Am I’s Tim Rogers is sporting a guitar that’s straight out of Spinal Tap and vocalist is Jack Charles from Bitter Sweet Kicks with members of The Escape Committee.

The Draught Dodgers are from Garage Land. The band is raw and with solid mixture of 77’ English punk and proto punk. Charles takes a while to warm up but eventually morphs fully into the dynamic front man that he is known as. The delivery is everything with this bloke. Highlights are Iggy’s “Sixteen” and a strong version of “New Rose” by The Damned

MC for the night is Anthony Morgan and he’s hilarious, channeling the local RSL meat raffles calls. He works the crowd, ensuring the merch stand sells out and the silent auctions are pumping. He makes sure we known why and who we are here for.

Adilita is a star. I was a massive fan of Magic Dirt and still maintain they were one of the significant bands that emerged in the ‘90s, taking their Detroit-crossed-with-Sonic Youth pop-smart music over to the mainstream. At the centre were her soulful and emotive vocals.

I picked up her first solo EP a few years ago and was impressed. It was sensitive in parts and then has some real bite. It is a powerful set tonight, and standing solo on stages Adalita has the audience eating out of hands with vocals that are warm, strong and emotive. Superb.

Spencer’s bandmates from the Beasts of Bourbon, Tex Perkins and Charlie Owen, wander on stage as a duo. Tex’s voice is rich and relaxed, with the expected tasteful guitar playing by Owen who ranks with Australia’s finest.

There is country music and there is country music, when it’s played with soul and with heart it goes straight back to channeling Hank Williams. It is sublime. Ross Wilson joins with some sterling harmonica, Highlights include” Psycho” and the Spencer-penned “The Day Marty Robbins Died”.

The Drones have been the darlings of the Melbourne alternative scene now for close to a decade and it’s well deserved. Gareth Liddiard’s fine delivery and the solid rhythm section of Fiona Kitschin and Christian Styubish are the core of a wash of sonic guitars and feedback.

The band delivers their trademark hypnotic blues-tinged, dark songs. The sound is strong with clarity and the reverb that The Draft Dodgers lacked earlier earlier in the night. The highlight was their song “Taman Shud” - the song that pissed off conservative commentator Andrew Bolt that moved him to declare that “these are the people that I am happy to offend”. I reckon The Drones slept easy after that spat. Tonight they played well.

I have seen Paul Kelly many times over the years. The first time was with The Dots at the Strawberry Hill Hotel in Sydney. I liked him and them. And now 300 songs and 15 albums later…it is always the same how you forget how good he is until you see him live.

“From St Kilda to Kings Cross” becomes a sing-along with 800 voices as his back-up, Kelly finishes with a couple of Spencer songs, performed with commitment.

It is finally around 1am when The Johnnys finally wander on-stage, Graham Hood, Billy Pommer and Paul Doherty are the line-up. The ‘80s music scene was better for the classic cowboy and country punk of the Johnnys. They were blurred memories of hard, drunken nights, too many beers and the first floor of the Trade Union Club. They were officially the hardest working band in the land.

Billy Pommer once told me the yarn that for years with bookers The Harbour Agency, suburban bogan rockers The Radiators had held the record for most gigs performed in a 12-month period. It was something like 200 hundred. The Johnny’s were only band that beat them, sometime in the mid-‘80s with something like 210. Apparently cake, champagne and powders were the celebration that awaited them.

Apart from playing incessantly, The Johnnys had some amazing songs and their first album is a real gem of that time. This was a band that was full of humour and had first grade songwriting. At the centre was Spencer. 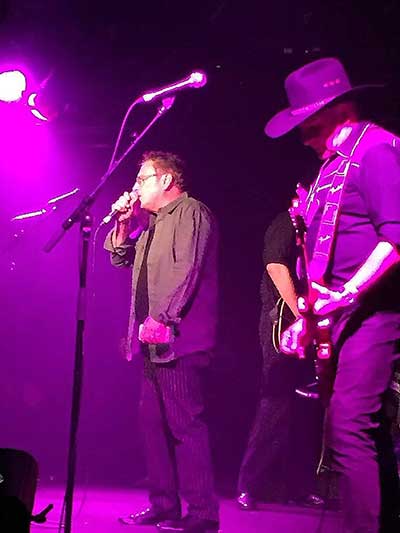 Tonight, they break out a set of classic Johnnys tunes with Ross Wilson joining them on harmonica (picrured right). They break into one of their most familiar songs, “Injun Joe”, and Wilson takes vocals. Wilson’s delivery is powerful: this bloke has an amazing voce and the place is rocking. Paul Kelly follows up and takes the mic with ”Bleeding Heart“. Tim Rogers follows suit and stumbles through a hilarious take on “Showdown”, right down to makeshift Fitzroy Street lyrics,

The night’s finale brings on MC Anthony Morgan and it’s over too soon. It’s a damn shame as I felt I wanted to hear more from this band as they were was in fine form and it really has been almost two decades since I heard these songs live. That said, we did miss Spencer.

This was a pretty special night. We heard some of the most distinctive vocalists in country with Ross Wllson Renee Geyer, Tex Perkins and Adilita. It was a night for the vocalists. Those who were disappointed by the You am I no show - well, so what? Something like this is difficult to organise. Shit can happen and you were served up with a damn superb night on all counts. The organisers should be proud.

Suppose it is right that I state my own take on Spencer and his music. For 35 years he has been part of my live experience. From being a teenager at 2JJ gig and seeing North Two Alaskans to those shows by The Johnnys and the Beasts of Bourbon in the mid ’80s, Then, Hell to Pay in the ‘90s. Most of all, what defined rock ’n’ roll for me was seeing Spencer play with The Gun Club at the Strawberry Hills Hotel. More recently, there were the past few years with The Escape Committee and those shows down at The Cherry Bar in Melbourne, playing solo.

Spencer P Jones is a one Australia’s finest song writers and a mighty fine guitar player. Spencer is a legend and I wish that he gets better soon.