Also, tonight we saw two bands, each the same but different; but still unique, still brilliant. And their grief meshed with our love for them.

First, The Johnnys. How they must have felt walking into the rehearsal studio and setting up without Spencer, when he was sick, I cannot conceive. However they managed it, they did so.

Walking in on the Johnnys' first song I was struck by the extraordinarily different sound. They've compensated for the huge gap by filling up the physical space and a bit of restructuring of the songs. They do not sound like that 1980s band at all. The proof of the pudding is in the scoffing and, had I not seen them years ago, I would love this outfit. Now, I love them all over again. Same band, different - but similar - reason to love them. Spencer is saluted, and rightly, but we also love those who remain. 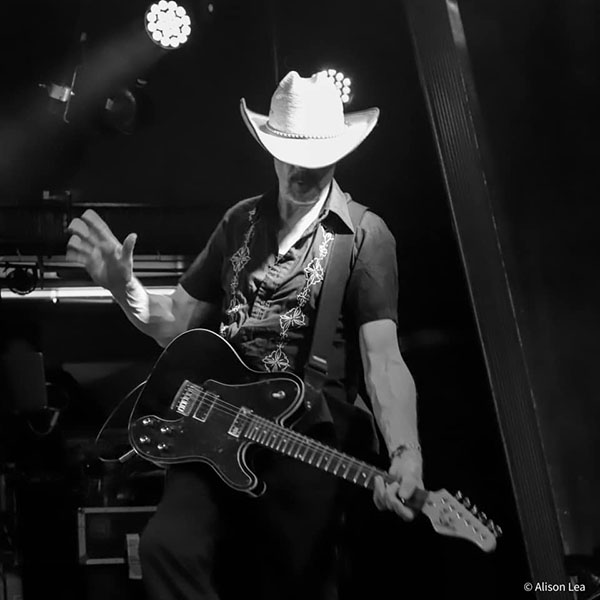 Slim Doherty of The Johnnys.

Let's be clear about this. Some bands aren't flexible enough to deal with selfishness, girlfriend-poaching and assorted other disasters which "somehow" befall bands; other bands take it on the chin, grimly weep, weather the changes and move forward, taking their grief with them. Either path ain't easy (just ask AC/DC, or INXS).

If either band here tonight had dragged in session musos or drunks with planks and strings, they'd deserve to be castigated if not castrated. Instead, tonight was a wonderful tribute to the men we all love and miss; had Brian or Spencer's spirit been watching (apart from being well on their way to draining their respective bottles) they would surely have thought, 'well, if I can't be there, better this way than the bands break up.'

Tex had it right when he declared the recent LP ("Still Here") and tour as a celebration of not just the band, but all of the members (and one of at least two former Adelaidean members was here tonight, too). Every one of these men are still grieving, still missing their brothers. The pain is vivid, raw. And, after all the travails and difficulties, the misunderstandings and the bad blood ... they love each other. They know what they are. They've come through a hell of a lot. There's more to go through.

We were happy to see this lot of Beasts, and of course we wish things were different, but ... they just aren't. The unthinkable is real. There were tears, by the way, in the crowd tonight, not just for Brian and Spencer, but for loved ones who would be here, but cannot be, and never will be again. The Beasts are a part of Adelaide, it's kinda like a homecoming, and our griefs mingled. A most extraordinary sensation. For the record, I couldn't sleep properly the rest of the night, my friends speaking to me in my dreams, and I woke with wet cheeks and a runny nose.

To the meat of the matter, then. Adelaide loves the Beasts, and that love was returned. In spades. Unlike the Jesus and Mary Chain, who seemed to relish the idea of isolating themselves from the audience (the front row, rammed up against the barricade, could barely make out the performer's faces), there was no ridiculous crowd barrier, no bouncers that I saw, and the band are right next to us on the Gov's incredibly intimate semicircular stage. Even though Tex tends to get grabbed at, poked, and womanhandled, it takes guts to accept such a thing as the price of the performance.

Certainly, the band is different. How could it not be? Formed by a loose circle of friends, recruiting others as time and life goes by. The band changed over the years as their lives changed - as did their fans. Some folks love the mid-90s creature. Others the latter years. Still others swear by the legendary first LP (rather like, I think, those who preferred a four-piece with their favourite drummer, Pete Best). Nothing wrong with that LP, nor the Pete Best-era Beatles, but ... we're a lot further down the road now.

You can like what you like. Ever hear children squabble? The kid two years older than the younger kid is changing and the younger one isn't ready to move on... doesn't matter whether it's what book to read, which squeaky-voiced TV show, which improbably expensive toy group, or which 'I-spy' game to play ... it's a 'where you are now' thing. Hell, we all prefer different songs, different LPs to others. And you know ... it doesn't matter poop.

All that matters is that every time I've seen them they've put on a tuff show - but particularly here at the Gov.

There have always been a certain qualities about The Beasts of Bourbon, no matter what the line-up, a fact which stands true tonight. They still have that slow, low, gut-bucket groove thing; they still canter and bray like a grumpy old donkey with the squitters; they still grab your attention and hold it, whether you like the song or where it's going or not.

Boris ruled his bass - you can see him listening to Tony's drums, see him physically reacting to Kim (these two are having a blast, by the way) and, partly thanks to the new partnership between Kim and Charlie, and the old partnership between Boris and Kim, the Beasts are now a different animal. Not 'better' or 'worse' - we're not married to the buggers (and thank god for that). But different.

Then there's the fine balance of the second "Perth corner" - Pola, Sudjovic and Salmon - which Charlie and Tex respond to, as the Perth trio respond to Tex's banter and Charlie's intuitive grace and power.

While we're on the subject of the man who exists solely to be mauled by females, Tex was in his element tonight. One of the best things about him as a performer is that he responds to the crowd, listens to them, sometimes responding. Here's a few examples: one bloke who I shall not name, addicted to texting, is in the front row. During one song, Tex gently leans down and turns the phone the other way, to the bloke's astonishment. It's not the gesture, but the calm, respectful way in which Tex does this which I admire. He coulda been a total aggro prick, and we all know bands who have aggro pricks.

He gently chides the Perth corner ("Hoodoo fucking Gurus. Fucking pooftahs!") and follows this up by curling up and pretending to sleep on a monitor while Salmon does a solo (predictably, Tex is mauled by overexcited females).

He reaches over into the crowd to speak to someone and, instead of ignoring either the band or us when the band thunder on and there's no vocals for a while, simply leans against a speaker and watches the band while having a drink. Actually, that's one part of the appeal of the whole band, that there is no pose, not really.

The Beasts are the antithesis of (say) The Jesus and Mary Chain's calculated artifice, we see only slightly exaggerated personas of the band members themselves. And in these men, all of them, right from the beginning of this low road we're all on here, we see ourselves. The worn jeans, shirts unbuttoned for comfort, the untidy hair (Jesus Christ, the hair; any style consultant would fucking weep), the scrofulous facial hair ... the sheer normalcy of these men who create such an extraordinary, primal feeling in us all...

One niggle (because no night is perfect). Sure, I understand whistling at a band. And calling out for songs. But when you holler for the same song during every break between songs, you advertise that you are a deadset drongo, to the band, and to everyone else. And, when you whistle during every break between songs, you don't sound so much like an advancing train or an interesting fellow enjoying the band immensely, but cross between your mum's kettle and a pubescent girl desperately screaming for Mark Holden in 1975.

At the end, the band fall over into each other's arms, happy, grieving, happy, sad, and filled with an evident, impossible emotion. The absence is profound, the present is also profound. The joy, the grief, the familiar, the alien absence...

This extraordinary night over until the signing of breasts, arms, merch and setlists, I cannot stop thinking there are more gigs to play yet, more LPs, more love and yeah, more grief along the way.

Long may The Beasts groove. Long may the Johnnys take us to a showdown. Same as it ever was; brilliant light tinged with darkness; same but different.

Don't ever, ever miss the chance to see either The Johnnys or The Beasts.