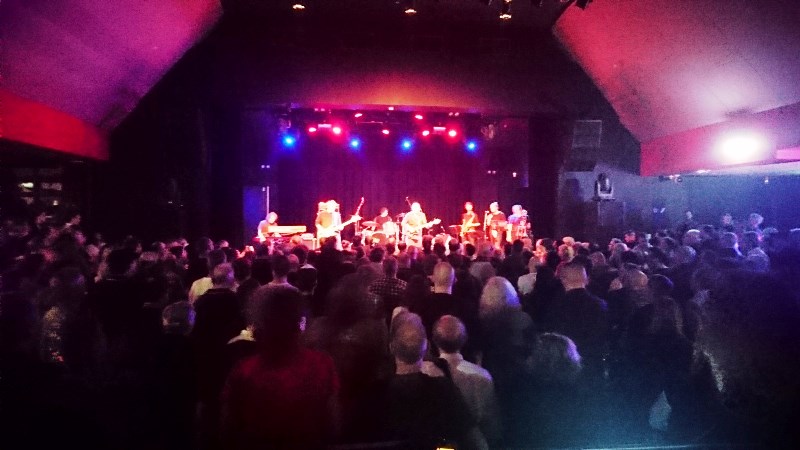 The Aints Mark III are more than an exercise in nostalgia. There’s a sprinkling of classic Saints material littering the set, but a third are songs woodshedded by Ed that were written before or during the original band’s three-album lifespan.

First, main support feedtime and this is my second dose in the space of a few months after a long drought of exposure to their unique sound. feedtime plays the most brutal, yet still musical, dirty blues imaginable. Stand-and-deliver. No affectations. 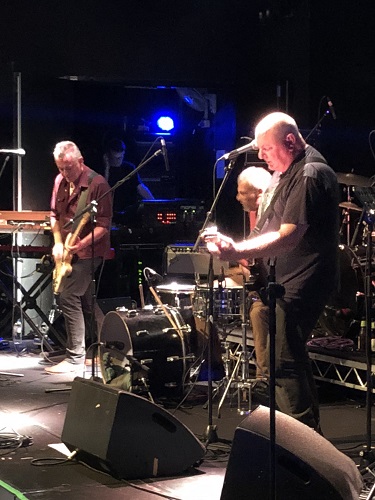 Many bands wear the tag “relentless” but none sound like feedtime. Each song is driven by propulsive bass, alternatively rolling and explosive drums and broken bottle guitar. The influence of X and early Rose Tattoo is especially evident in Allen’s basslines and Rick’s occasional slide.

It’s an expansive, 60-minute set with songs drawn from most of, if not all, the feedtime albums. All original plus their dismembering  of the Stones’ “Paint It Black”. There seem to be people in the swelling crowd to whom the band is a new experience. I’d lay money a fair proportion are converts. Rick's broken E string isn't the only thing left swinging in the breeze towards the end of the bracket.

The only product at the merch table is the vinyl re-issue of the band’s impossible-to-find “Billy” album (all the Aints stuff long sold out on last year’s tour) and it’s doing brisk business.

By the time the Aints tramp onstage, the Manning Bar is groaning at near capacity. You wanna see a sea of hands? This crowd is a sea of grey and a few shiny skulls. Polite nodding, rather than frenzied pogoing, is the order of the day.

Despite its hit-and-run nature this is no cursory Aints set. The band’s brought the three-piece brass section and the set goes for more than 90 minutes.

(Spare me an old man moment but the brass section needs to lop off those man-buns, quick smart.)

It’s a similar bracket to the one played at the Factor Theatre in Sydney in November but there’s less patter, faster song tempos. Here it is, helpfully annotated for the “new” old songs earmarked for recording:

This Perfect Day
Orstralia
Messin' with the Kid
Prisoner
Everything's Fine
*Elevator (A Song for Barking Lord Jeff)
*(Goodnight ladies) I Hear a Sound Without,
Story of Love
Brisbane (Security City)
*This is Our Summer
*S-O-S '75
*Demolition Girl Part 2
*Red Aces
*Church of Simultaneous Existence
The Chameleon
Know your Product
(I'm) Stranded
Nights in Venice
Memories
Swing for the Crime
River Deep Mountain High
* from the forthcoming album “The Church of Simultaneous Existence”

Online commentary is funny. I've seen people say Kuepper's guitar attack isn't as frenzied as it was back in the day. One mate who gave tonight a miss lamented the lack of Marshall stacks behind him at the last Sydney gig. There's a capo in evidence too. That one drew fire from someone who caught the last Brisbane show.

The bottom line is that the Aints' sound is very full-on. Ed probably doesn't thrash on the downstroke like he used to - maybe a by-product of knowing how to play - but there's nevertheless a massive sound emanating from his direction. My guess is a small rig is exactly what he'll be using when the band goes into their all analogue studio to record...and it will sound even bigger. Pete Oxley's bass tone, too, is a thing of wonder that fills every room it graces.

Was it better than the last Aints show in Sydney? Probably - by a short half-head.

If I die before I hear the new recdord, don't forget to put roses on my grave.

FOOTNOTE: The Aints! return to Sydney on April 27 for a final appearance before the recording of their debut album "The Church Of Simultaneous Existence" in May. This time though Ed, Pete, Paul and Alister will be presenting an epic two-set show; the first set comprised of material conceived and / or recorded in Australia and the years 1973 - 1977 and the second set covering the material written or released by Kuepper for The Saints during 1977 - 1978 and the band’s tenure in the U.K. In effect; more Aints! and more Saints! Completing this alchemy of Herr Kuepper’s teenage blues is a name change with the band from here on in to be known as The Aints! (exclamation mark included).