I see the band's Wikipedia entry has all the usual crap ‘genres’ appended to Boris, including “sludge rock” and pile of other worthwhile pigeonholes. And, equally as usual, I am going to point out how counterproductive genre-spotting is. As if you can’t write an opera as well as a history of an Aboriginal tribe, and children’s books as well, if you want to. Graeme Jenkin had the right idea. But such diversity apparently confuses some people.

Last Days of Kali were very enjoyable. A chap with a few boxes attached to a keyboard, a guitarist who takes her time, and a powerful drummer who doesn’t. Moving, emotional, strong (the drummer lost the top third of his stick…). Great use of cymbals and careful, precise guitar. This is their Facebook page.

Crypt, perhaps unsurprisingly, are kinda doom stoner rock, three guitars all in sync, and a bassist who hardly ever seemed to have his eyes open, a tough rock drummer and a singer who writhed, posed, gesticulated and yelled a lot. No idea what he was on about but it was very effective. Crypt reminded me a bit of Legends of Motor Sport, especially the crunching, in-unison guitars. Here’s their Facebook page.

If you haven’t paid much attention to them, you probably think Boris are a little one-dimensional. I know people who love their crushing guitar noise stuff, but hate their later, more beautiful stuff.

And Boris is currently the only band I can think of who could both give AC/DC AND The Swans a run for their money - in the one set.

Their set, courtesy the irrepressible Bob Lehrmeyer (there was only one setlist, and only one Bob):

First, their roadie brought out Takeshi’s rig. I damn near shat myself. It was huge. On the floor there was what looked like 30 pedals. Wata had even more, and some damn contraption like an amp up on a folding table next to her. Wata had what looked like a small house of amps and Takeshi had a small hotel ditto.

Drummer Atsuo came out, went right to the front and jee’d up the crowd, who bellowed back. He looks like he either just stepped out of classic T-Rex or Sensational Alex Harvey Band. And with him on the stool they’re a tight, tight outfit.

Wata, the guitarist, and Takeshi, the bassist and guitarist (he played a twin-neck) are so much in lock-step, they barely needed to glance at each other, yet up close their concentration is phenomenal. If anything, they seem physically restrained, all their concentration is on the music and the songs. Apart from having a beautiful, haunting voice, Takeshi is also a damn fine bass player, and as a guitarist he’s pretty damn good as well. Wata is a killer guitarist, who knows that less is more, doesn’t waste time or energy in that blokey “I’m pushing out a big poo” expression when she’s got her fingers on the high notes. By god she’s good. 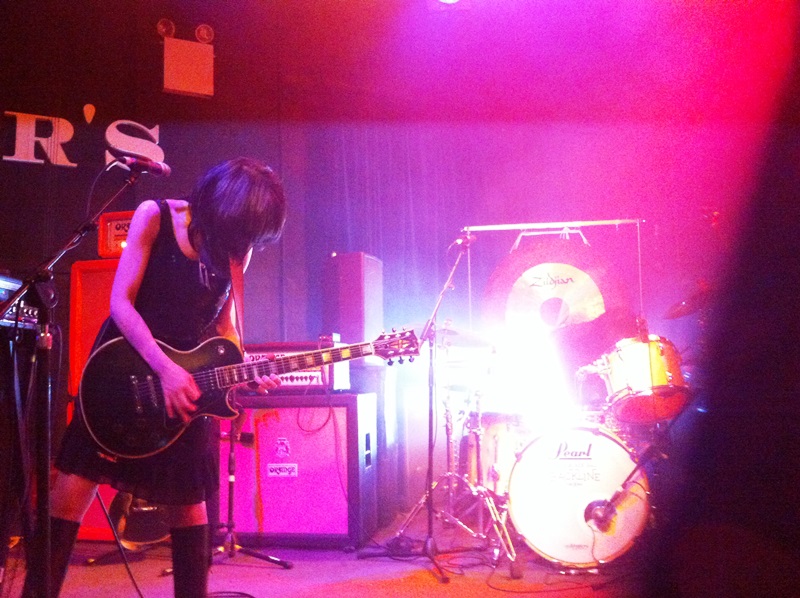 The level of precision and care Boris take has to be seen to be believed. Wata used every pedal, as did Takeshi. Every song has a range of complexities, wrapped in the most simple musical structure available. Boris aren’t so much a rock and roll band, if indeed they ever were, but some sort of direction for modern music to take. Quite honestly, people are going to be rediscovering this band over and over in the next few decades, and it utterly still amazes me how modern radio can remain so bland and tasteless. Like watching a cooking show and thinking you’ve tasted the meal.

Boris are a band you need to get into. Try here.

Some of the crowd were definitely there for a good old-fashioned thrashabout in the mosh pit. Boris didn’t entirely oblige, not really until the last song, when they approached the amps and cranked them up, the feedback rippling and crackling like the sky when monsters break it. In fact, Wata and Takeshi’s guitar on “Vomitself” sounded nothing so much like monsters attempting to communicate without words. Extraordinary.

It was on this song that Atsuo left the kit, walked to the front, gee'd-up the crowd some more, and threw himself in. He was eventually deposited on the stage, walked back to the kit and started playing for the first time in that song, at the precise, perfect time. 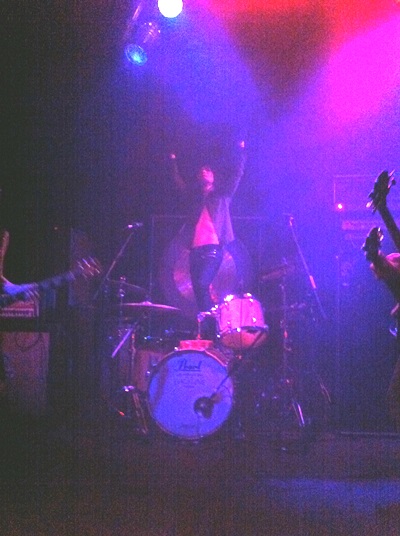 There was no encore, which didn’t entirely surprise me since Takeshi and Wata had been drastically altering their tuning during “Vomitself”.

I don't think I've ever seen a band so all-compassing, which covers so many bases so well and with such power, grace and elegance. Thank you for coming to our little town.