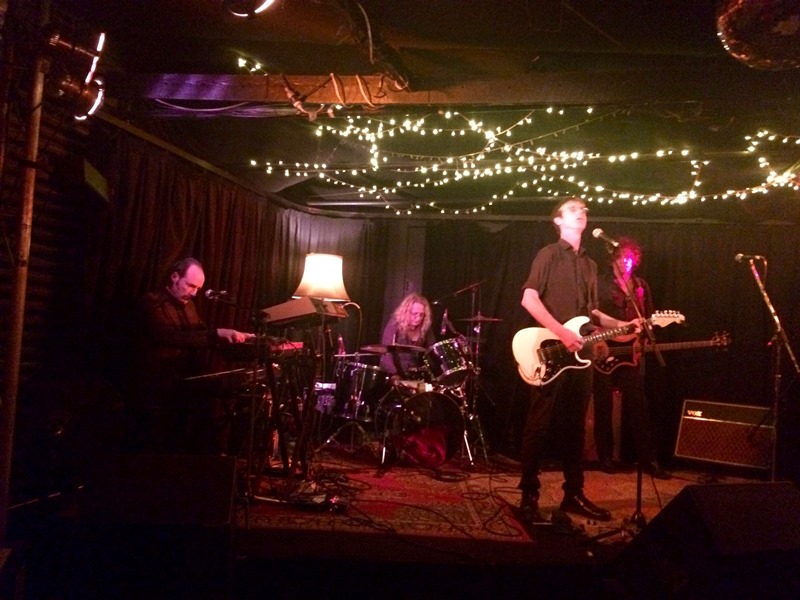 But we're here tonight for a couple of reasons - first, because I enjoyed Charlie Marshall's new LP, “Sublime” (reviewed here and here) so much I wanted to see him play a few songs off it (they did the entire LP in sequence which I wasn't expecting and was quite a treat.) And because I'd been at a gig in Melbourne, where I was preoccupied with urgent stuff outside, and missed Charlie’s set completely and felt I really missed something. I mean, unless a band are clearly dreadful, I feel I should watch the whole set, and don't really understand people who turn up to a gig and manage to avoid every band - still less support acts who pack up and vanish.

Charlie was well and truly in the moment tonight. I’ve never encountered anyone quite as enthusiastic about the natural world and its mechanics, and our interaction with the world at large as Charlie.

It’s not just his passion but his clear understanding of the physical forces at work around us is so involving... well. I've seen hundreds of crappy, thoughtless deliveries about lurve (and so have you); so when the band start off with “Starburst” and runs right through to “Chaos Calling” we were swept up into a swirling series of thought patterns which toppled like Elgarish playing cards as Charlie shifted up and down, working his body like one of those Swiss penknives that you know you just have to open every weird silvery spike ...

Charlie also has a fine mic technique, sometimes yanking his head back sharply to avoid overloading the thing, sometimes singing off-mic entirely, which allows him to get right up close for quieter vocals. So I'm assuming the sound chap had his mic shoved fairly high up.

And it's also an education watching him play. The only pedal he really uses is a wah - and that to great and pert effect. The rest is tone and volume switches, and just bloody good playing.

Even his offhand remarks are the kind of thing you’d want to hear in your high school physics class - driving from Melbourne to Adelaide, he started thinking that he was driving against the turn of the earth, and at the right speed, if he could keep driving endlessly, the sun would always be at the same point in the sky, and he’d be like a little mouse on a wheel… in anyone else this would be unutterably depressing, but Charlie is excited, thrilled by the thought and absolutely must share it with us.

Bryan Colechin handled bass duties, Clare Moore wrassled the drums (which rolled over to have their tummy tickled) and Tim Deane was on keys - he also plays in the Hired Guns. I've yet to see them - a nuisance because they're damn fine and there's a distinct Adelaide link there. He also plays with James McCann and the New Vindictives and Ron Peno. Deane lurked behind a bank of three huge keyboards (piano, organ, synth I think) and all we could really see was the top of his head, but what we could hear was careful, precise and smart.

The difference between Workhorse and The Curious Minds was palpable - and down to decades of experience from Marshall's outfit.

The Wheaty doesn't do volume or  heavy rock. It's more low-key (hell, there are signs on the monitors facing the crowd - 'please no children on the stage'). The Wheaty don't want the music to disturb the other patrons in the other rooms of the hotel - they want the other patrons to wander in if they feel like it and not feel shoved aside by a wall of rawk'n'skronk.

Which means that, with a set as nuanced as Charlie's, you need excellent musicians to play softly, loudly, and all sorts of areas in between - Colechin roams from playing simple lines to quite complex (at one point reminding me of the first time I beheld a genuinely amazing bass-player - Barry Adamson in Magazine in 1980. In retrospect, Adamson played too much when he didn't need to - which he doesn't these days); tonight, Colechin drips balance and discipline.

Speaking of discipline, Clare Moore is another musician I never tire of seeing - and I first saw her in 1979, when I used to go to see her and Dave Graney in the Sputniks at the Union Hotel. Despite bands where she plays kinda soft ... with anyone else it would sound kinda sleepy. With Clare, there's this tension, this coiled critter ... about to leap out at you - even though she often has her eyes closed, lost in a world of ecstatic music, from which she emerges with dazzling smiles which melt everyone who sees them.

In fact, Charlie Marshall and the Curious Minds are one of those rather super bands which, were you lucky enough to see them on a regular basis, you would find yourself watching a single musician for most of the night, each as rewarding as the other, but for entirely different reasons.

The crowd were suitably appreciative, tripped out, grooving‘ and by the end, demanding and happy. You really can't ask for much more than that as a musician (apart from, I suppose, winning Lotto). Charlie Marshall is one critter you should see, and soon, before he moves onto something else.

Get ‘Sublime’ and all sorts of other things here.