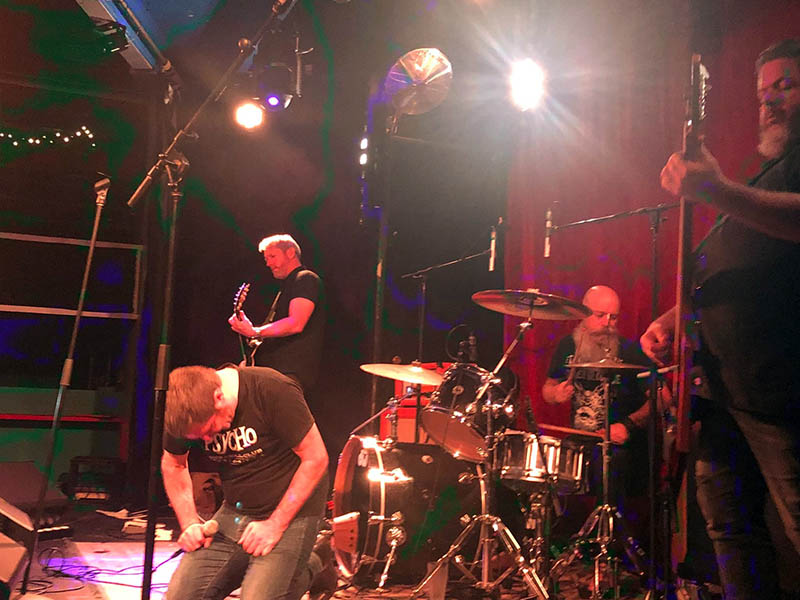 So, The Vains are clearly well-known and loved in this city but because I'm a sad old fart I haven't managed to see them. I get there a bit late and, as I walk through the door I hear the high vocals amid a squall of bass and drums - and a guitar sound which reminds me of the harder parts of 1974 LA glam - Lita Ford had a similarly uniquely tough sound. 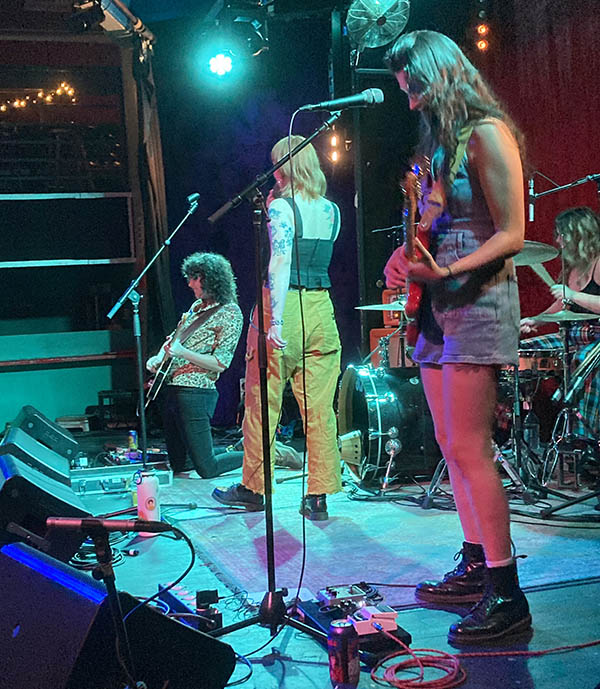 The band are having a blast, and it's clear that they love making their music, bouncing off each other, and their joy is completely infectious. This is what makes gigs special. And, get past that and ... well, this is a damn fine rock band which deserve airplay anywhere.

Cull - The Band. Finally I get to see them and while it's certainly worth the wait, more fool me for not catching them earlier. They went up to Sydney to support someone a while back, but because not all rockin' Sydneysiders will have seen them, allow me to introduce them:

"SAVAGE GARAGE PUNK RAWK N RAWL THE WAY IT WAS MEANT TO BE PLAYED", bellows their Facebook page.

Now, I dunno about “savage” but there's certainly a fierce intent from everyone on stage. You might recognise Jeff from the Exploding White Mice on guitar. Ben Gel is on bass. Pete Howlett is on guitar. And a chap called Shane is on drums who looks familiar. And yeah, after the comparative youth of the Vains, here we have a group of blokes who look rather like they've been plucked from their garage, the older breed sweating pints and pushing myocardial infarctions - and loving every dirty, messy minute of it.

Cull's sound is fucking awesome. Huge. Shane beats the drums like he's trying to pound his way to Argentina, he's thunderous and powerful. Volcanic, even. Jeff's guitar is careful and precise (like he always is) and he's nut-crackingly tight. Howlett on guitar - look, he's a consummate show-off and he knows it, but  unlike most guitar hero show-offs, he can play damn well and he's an engaging personality onstage. Like Jeff, great finger work, too, and he does those daft but hard to do tricks like play with the guitar behind his back, under his legs ... hopping up and down, pissing sweat... first thing he'll ask you when he gets off is 'is my hair alright?'  Ben Gel's bass is equally muscular and rough - he gets such great stuff out of that Ampeg fridge. 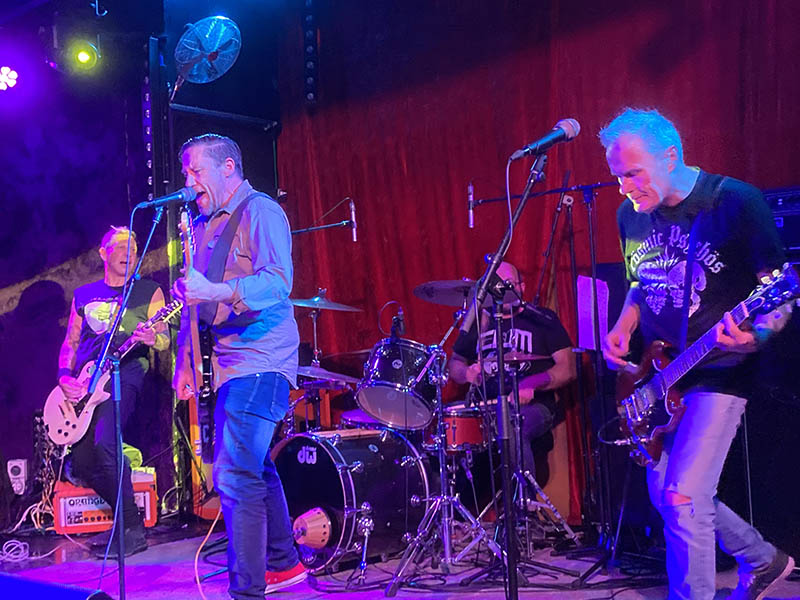 Watching them is kinda like a composite of a 1974 LA glam band (again), the Clash and ... later Ramones. Great pop sensibility, bags of attack and sweat. Sure, they fuck up a couple of songs, but as they explain (to gales of laughter from the crowd) they've all had covid. Which they have. And, I suspect, so have most people in the crowd. We've dodged an early death and we are OVER it.

And the main outfit? Well... they're a leanie, meanie fighting masheanie.

You wouldn't think The Meanies have been around since 1988. I mean, that's (counts carefully on fingers) oooh...

On the one hand, you'd think it'd be hard to find something fresh within that rough pop structure.

On the other... nah. The Meanies' talent grows on trees, I swear.

I love the way we've taken The Meanies to our hearts, their familiarity and their difference. How they, like the Hard-ons and Rat Catcher the other week, and the Vains and Cull tonight, are all an integral part of the underground pulse, part of that essential discovery of the necessary subculture. Not every band can say that, not at all.

This is the kind of event we go to work for every day. We don't go to work for rent, or a car, or to pay off shitty credit cards or even, no matter how much we love them, our kids. No. We go to work to enable us to go out and become what we are, what we should be, just a little bit more alive, ourselves in a maelstrom.

I love the natural way that one Lindsay McLennan has become Link Meanie. How Jordan Stanley becomes Jaws Meanie (guitarist), how Mark Hobbs becomes Ringo Meanie, and Roderick Kempton becomes Wally Meanie. I love the fact they've kept going despite the tragic loss of two members, and how the “new” members are as familiar to us as football, meat pies and Holden cars. 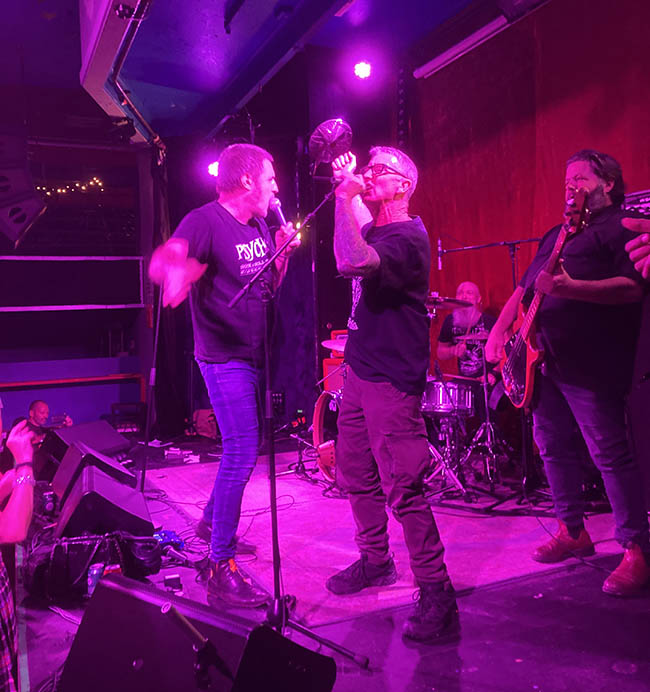 I love how we can see the influences, but clamour for the new, the variations, the impulse, the way the crowd adore the band, know the songs (reminded me a bit of the way people sing along to the Buzzcocks or the Ramones) ... I love the way The Meanies genially allowed the enthused (and perhaps inevitable) stage invader, who shouted incomprehensible gibberish into the mike before whipping off his T-shirt and shouting again, before being gently ushered off stage, where he promised the bouncer to be good and not do it again. I am sure that Coopers Pale had no part in his riotous behaviour.

Let's assume you've not seen The Meanies before. More fool you. And if you have seen them before, and don't go to see them now, you're a tool as well.

Wally is unflappable, exactly what you need in a bass player. On time, on target, keeps an eye on his singer. Ringo (not to be confused with the American outlaw Johnny Ringo) keeps the intensity burning - neither Ringo nor Wally look at each other, they're just tight like a too-low Melbourne bridge. 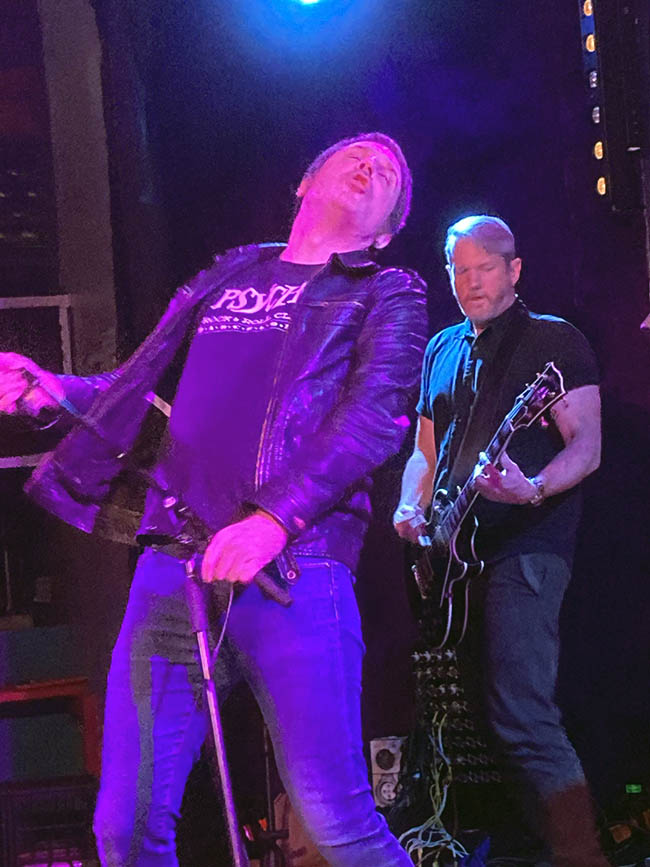 And Jaws ... well, from where I was standing the guy could not put a foot wrong. A grand, tough sound, the kind of guitarist most bands would want but will never find.

However ... some lead singers are utterly captivating. I'd kill to see Sleaford Mods, but the opportunity hasn't arisen as yet. In fact, take a squizz at Jason Williamson - he and Link look a bit alike. There's a sort of similar kind of facial expression.

Link, however, is barely capable of standing still for more than 10 seconds at a time, he has a case of the blunt, awkward ballet, a lost hurt, and he twitches and chucks himself about the stage as if he's in the midst of some private grief, his face wracked with concentration, determination and, just occasionally, desperation. You feel for him, yet you don't want him to stop. Vulnerable, brutal, incredibly conflicted, yet strong, and ... a normal bloke.

Perhaps with a few weirdy bits.

The Meanies are one of those very few bands who you could see night after night and find yourself hypnotised by one player for the entire gig, or even one aspect ... for example, one of Link's boots was broken and bound together with pink gaffa tape and I could see myself, if I were to see them the next night, watching his stab-dancing feet yo-yoing across the stage, occasionally twisting on the snot he kept blowing out of his nose.

You'll notice that The Meanies are on Cheer Squad, the same label as the Hard-Ons, and Even, and Bagful of Beez. Get The Meanies rekkids, new and a bit older, and T-shirts, stubby holders and baby's socks and nappies here and here.  Pester Cull here and The Vains here.