It’s a fine warm evening in Oslo, and there’s a decent crowd of folk gathered in the bar at the Kulturhust to see opening act Petter Baarli, and his band. I know nothing about his musical past, but a quick post-gig scan on the Internet reveals he’s been hard at it in various bands (notably The Backstreet Girls) since the later '80s.

Well, Petter and the guys turn in a short/fun set of charged rock 'n' roll, with the diminutive frontman/guitarist proving to be a real showman, ripping it up like a cross between Johnny Thunders and Angus Young, with duck walks a-plenty.

There’s a great/bizarre moment, when he pulls on an ‘I Love Palestine’ baseball cap, and takes a big swig from a bottle of JD, before lurching in to another trashy number. 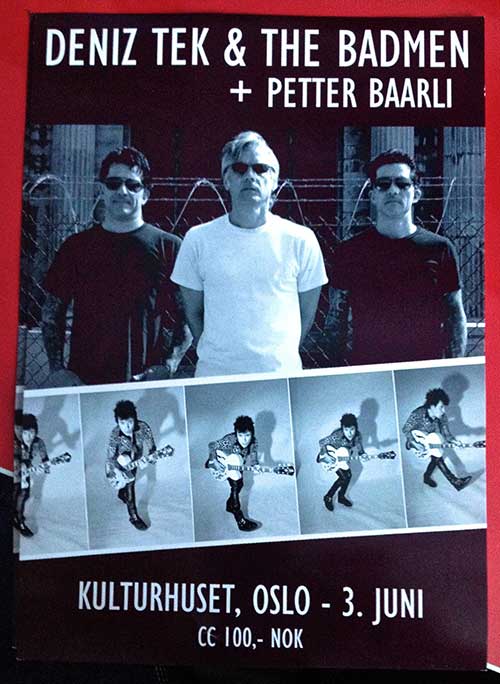 As soon as the support band depart Deniz’s compatriots, tattooed twin brothers Steve and Art Godoy, take to the stage and assemble their rigs. I am now very much psyched, and can’t believe my good fortune.

You see, Deniz Tek is a guy whose music has been a big part of my life for about 30 years. He’s been the driving force behind some of my favourite records (‘Birdman, Visitors, New Race) and in recent times, to paraphrase one of his own lyrics, he’s played with the Stooges and DKT-MC5. I’ve diligently snapped up recordings by his various band/projects over the years, but this is the first time I’ve gotten to see him solo. Deniz soon arrives, and two trademark white axes are positioned stage left. I’d say we’re just about ready for action! 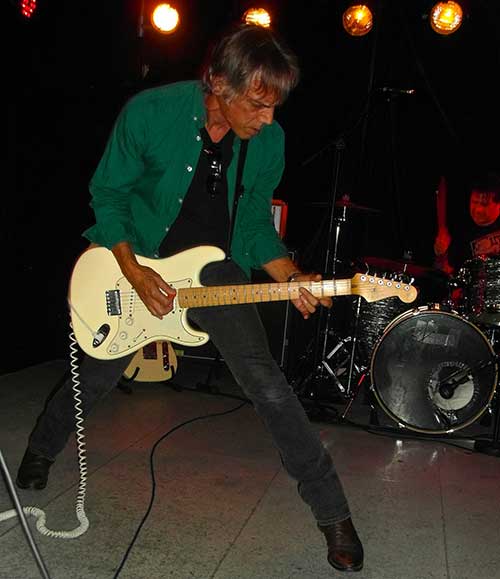 Plugged in, and with little fanfare, the band launch in to a stripped down jam on Fleetwood Mac '60s blues standard “Oh Well”, which alerts the crowd to get inside, cuz hey – there’s a band on people! And it’s then straight in to “2 Pam Chloride”, from 2003’s Golden Breed collaboration with the Godoy’s, which makes way for “Smith and Wesson Blues”, and “Steel Beach” (that goes all the way back to early '90s album “Take it To The Vertical.”) We then get some tracks from Deniz’s recent long-player “Detroit”, which I’ve been giving plenty of rotation.

Fact; I’m not just here to hear the olden stuff, I’m all about new material too. The renditions don’t disappoint, “Fate” and “Twilight” do the rockin’ business, with Stones sized licks, and Steve Godoy thrashing the skins, whilst his brother rides the bass lines with precision and ease. “Can of Soup” is dedicated to everyone that’s gotta go to work in the morning. Well I can’t complain, it’s the work that brought me here, and allowed me to catch this show, and besides, the astronomic price of booze in Norway (9 quid for a pint anyone?) means I'm stone cold sober. Getting up won’t be a problem at all thanks Doc! 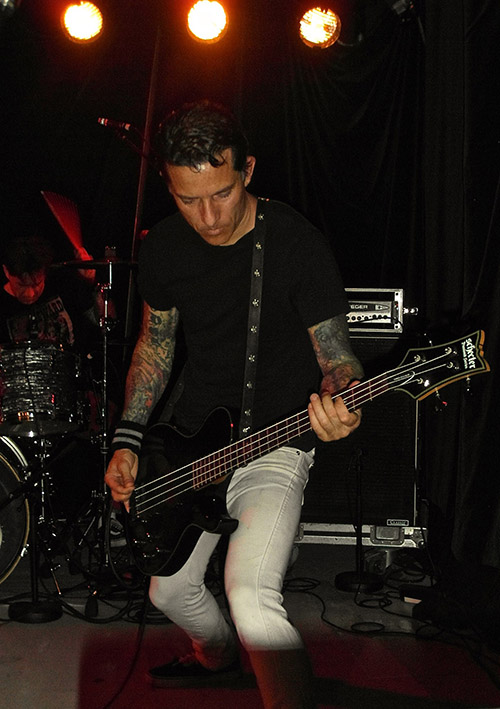 “Blood From a Stone” (from the “Outside” LP) is a solid rocker, and “Snake” takes it all the way back to the mid-Seventies, and ‘Birdman’s early days. So yeah, a great span of Deniz’s musical career going on here, delivered in a no-nonsense fashion by three stellar musicians.

The crowd are into it, if a little restrained. Me, I’m having a whale of a time! And it gets a whole lot better when the opening tones of The Visitors “Life’s Spill” ring out... “woah-oh-ohhh”... hell yes! Regulars to The i-94 Bar will know of course that Steve and Art have played in the latter-day line up of The Visitors, and the version pounded out is monumental. Hands down, song of the night for me, was still bouncing around in my head in the morning.

“Endzone” gets an airing, and the downbeat “Ghost” (from “Detroit”) is a witty/sober lament to the demise of Deniz’s home city. The term “Maelstrom”, Dr Tek notes, originate in the North of Norway, and importantly (for us) it’s a killing ‘Birdman track, and I’m mighty stoked to hear it’s songwriter cranking it out just a couple of foot away from where I stand.

Now, I’m a bit blurred here, but “I’m Alright” (another “Detroit” number) gets played, and at some point at the tail end of the main set we get our ears set alight by the 13th Floor Elevators standard “You’re Gonna Miss Me” which you all also know from "Radios Appear." An absolutely righteous song.

The band briefly down tools, and catch a breath, whilst the crowd demands more, and minutes later the trio return for a version of “Pipeline” before unleashing “Hand of Law”. Perfect end to a great set. Tek and The Badmen are on tour in mainland Europe thru the rest of June. Catch ‘em if you can. 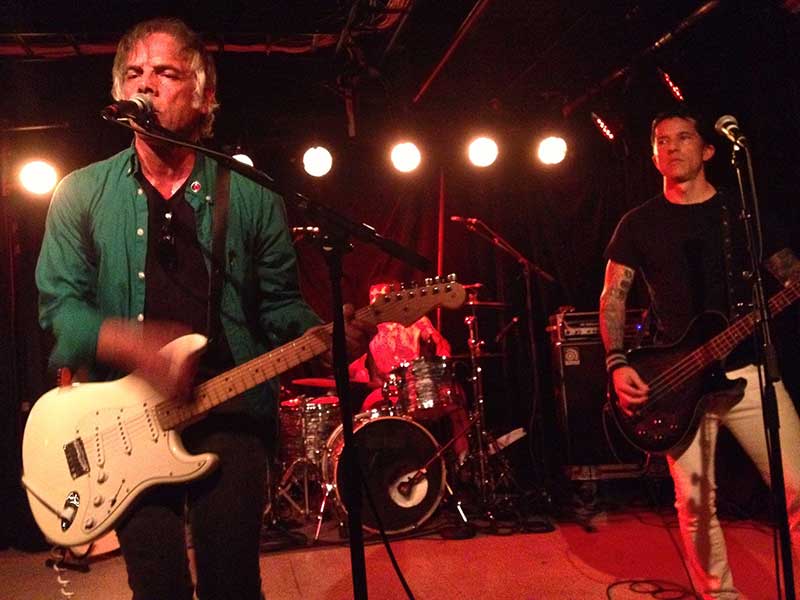