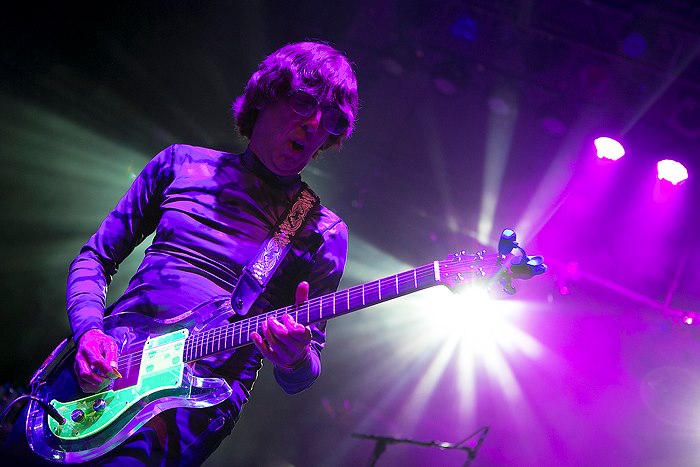 Been a lot of bad mouthin’. And that’s why I’m here. I consider myself to be a Flamin’ Groovies kind of a guy and I have been rewarded for my devotion. Two gigs in three days... and they were fantastic. And I feel the need to testify. I know. All these people describing them as nothing more than a bar band and totally missing the point. The Flamin Groovies are not a bar band. They are THE bar band. Out of tune? Sloppy? Well, d’oh. Have you people actually listened to those Skydog releases? More Grease? More bum notes. We still ran diamond over vinyl until the notes scraped off.

No, the Groovies are a beast shambling towards Jerusalem. They start off ragged and hit a groove usually at the start of the second verse and they ride the groove for all its worth. You can dance to the Groovies. Watch George on bass. He’ll show you how. And he must be creepin’ up on 70. Is Cyril wearing a wig? Who gives a fuck? Is Chris Wilson’s liver so shot to hell that he takes a single slug of beer and is pissed as a fart. Well that puts him right up there with just about everyone else in the room tonight.

These guys have done the tough yards since before most of us were born. They’ve been shat on, spat on, raped and abused and still come back writing better songs and playing tougher lead breaks than any of us will ever dream of. The band they could not kill. Now, in a half full bar, I’m dancing with a big old smile on my face. The old gang is back together; or at least a sizeable chunk of it. And, for better or worse, they sound like the Flamin Groovies.

Firstly, however, the Peter Case Band. For those with no clue: #nerves #plimsouls #hanginonthetelephone #grammy™awardnominated. Up to date now? To be honest, I always thought of him as the Nerves’ also ran kind of guy. He had that big US hit with the Plimsouls called “A Million Miles Away”. As a career highlight, it isn’t a bad song but loses its gloss on an album of similar but not-nearly-as-good-as tracks. These days, he plays more roots based material but, for the Dig it Up tour, he’s been convinced to pull out the back catalogue.

Tonight, he concentrates on Plimsouls’ material and some rock and roll standards and it works. A bit of Dylan. A bit of Chuck Berry. Two numbers in and I’m convinced I should drag that old CD of his I’ve got out of the rack and give it another spin. Stripped of Eighties major label production values, the songs take on a life and personality of their own. From less than zero expectation, I went to enjoying his set immensely.

I’m still glad I side-stepped him at Dig It Up because his is a band that probably only works well in intimate surroundings. A shabby man in dark glasses, I can’t imagine him winning over a large room. In the Annandale, however, his banter and charisma shine almost all the way to the back of the bar. The band slams into a couple of newer blues based songs and, before Pete can remind us he is the biggest supplier of Peter Case records in Sydney, it’s all over. #Competent. #Professional. But never dangerous.

After all these years, the Groovies remain dangerous. A primal rock and roll force stoked by contrary demands, human frailties and fractured egos. Despite emerging from the scene that spawned the Grateful Dead and Jefferson Airplane, they remained outsiders; the snot nosed punks who put their love of rock and roll before the long dark guitar solo of the soul. They have snatched defeat from the jaws of victory so many times that it is tempting to talk of ancient curses. At one point in the set, Cyril will point at one of the little disasters that litter the evening’s proceedings and say “It happens to every band sometimes”. Behind me, someone says “Some bands more than others”. The heckler is absolutely right. It may as well be the Groovies’ family motto.

If people know them, it is for the single “Shake Some Action”, a shimmering piece of pop perfection hammered to precision by Dave Edmunds echo drenched, treble heavy production. It is an Everest of a song; a song that put them so far above everyone else in the game that the only way forward was down. Everyone with a music collection has it on a compilation somewhere. However, I can’t remember the last time I saw a copy of the album it came from in anyone’s record collection bar my own. Over the years, everyone who is anyone has tried to cover it but failed to improve upon it with added football terrace chorus, chugging rhythm guitars and unnecessary muscle; even ex-Groovies themselves. Perfection is perfection. Yet the Groovies seem mainly remembered through those who have covered them.

A number of Australians may remember a mid-'80s tour where, lacking original vocalists, they sounded nothing like the Flamin Groovies. A less than spectacular album was released in its wake. There is a reason it is missing from my otherwise complete collection of Groovies’ discs. Essentially, this is the first time down under is seeing this band.

For the sake of argument, we’ll forget the Roy Loney years. Now they are back with “Action” singer Chris Wilson in the fold. For all intent and purposes, they are the killer force that bought us "Slow Death", "Dog Meat" and "Let Me Rock". For most bands, this second act in a career would have been enough to seize a place in posterity. The Groovies took it one step further and turned left field back to the future by embracing British '60s pop and unleashing three Sire albums whose influence echoes down third, fourth and fifth hand to this very day. What could go wrong?

Tonight, Sydneysiders have a chance to find the Holy Grail of Rock and Roll and I hear they sold 130 tickets. And despite the band member’s smiles and apparent camaraderie, the old rivalries are clearly running just millimetres below the surface. Reports about bad gigs in Japan and a poor showing in Brisbane fuel internet gossip. Everything could go wrong so very quickly.

It’s not yet the scheduled 10 o’clock but the band are eager to get on stage. Chris Wilson suggests we motherfuckers should kick out the jams. They launch into “She Said Yeah” and all cylinders are firing. Everyone is in tune and kicking the biscuit... until Cyril breaks a string. The song ends and he heads off the stage and out to the back somewhere leaving everyone looking at each other in confusion. Chris Wilson takes up the slack and begins to sing Dylan’s “Chimes of Freedom”. Drummer, Victor, cautiously follows him into the song. It is a truly stunning rock and roll moment. Wilson charges it with the emotional intensity of a national anthem. George, meanwhile, stands stage right. Tonight he wears a black drape with red trimmings, a beret and dark glasses. I can’t read him. Is he standing there in amazement at the beauty before him or is he cursing Chris’ leap into the spotlight?

When Cyril returns, Chris looks like he’s been caught with his hand in the cookie jar and promptly stops. Cyril tells us that he never breaks strings. Especially G strings. He tells us he uses twenties so he won’t break them. The audience suspends disbelief and Cyril passes a bottle of port over to a shaken Chris. Chris says he needed that but looks like Barney in the Church of latter day Simpsons. He may as well have said “It begins”, for no man’s beer will be safe from him now. If a bottle passes close enough to his reach he will snatch it and press it to his lips. “Beer,” he says. “An inferior beverage but sometimes necessary.”

“Let Me Rock” from the "Grease" EP follows and, for me at least, the night’s first highlight. It is one of those songs that has been a favourite yet seemed forgotten by everyone including the band. Everything is going fine and then Chris’ string breaks and he doesn’t seem to know what to do. He can’t seem to find the hole in the back of the guitar. Cyril suggests they do the next song whilst someone else restrings the guitar.

“No, man. Don’t do me like that”, Chris mutters in Cyril’s direction.

He tries to keep it private but I hear it 10 feet away - and so does everyone else in the room. Suddenly the fracture lines are visible on stage. It’s clear these guys love each other but it is also clear there are good reasons that they haven’t played together for 31 years. Suddenly, there is the genuine sense that they might not get through the set together.

Cyril might spend the night smiling like a loon but he keeps a clear reign on proceedings with a sideways glance. Gimme danger little stranger. Battlelines are drawn for the rest of the set.

The band will follow Jordan . George will follow him anywhere. With a song like "Slow Death", a band would generally follow the singer. You hear him start the song and you count off four lines and hit the chorus. Jordan stops listening and counts the song off from where he thinks they should go. Wilson finds himself looking confused and undermined when caught on premature chorus changes. The drummer looks confused, not knowing who to follow. And so it goes.

Is it sloppy and vindictive? Yes. But is it a great rock and roll show? Hell yes. This is music to dance to. They play great songs the way they should be played. I won’t bore you with a list. This is a wonder to behold. This is music in the style of how I grew up with music. But it is also a great tragedy. Because, after all these years, this is a band that will still cut its nose to spite its face.

But this is what I want you to take away from this review. If the Flamin’ Groovies were back in town tomorrow night, I would go. If they played a week long residency, I would go every night. Despite (or maybe because of) their failure to adopt to the modern way of doing things, they remain one of the most exciting bands on the planet. So many of the complaints I have heard about this tour sound like the kind of criticism the Groovies got from Eagles fans in the '70s. And surely no-one wants to be compared to an Eagles’ fan.