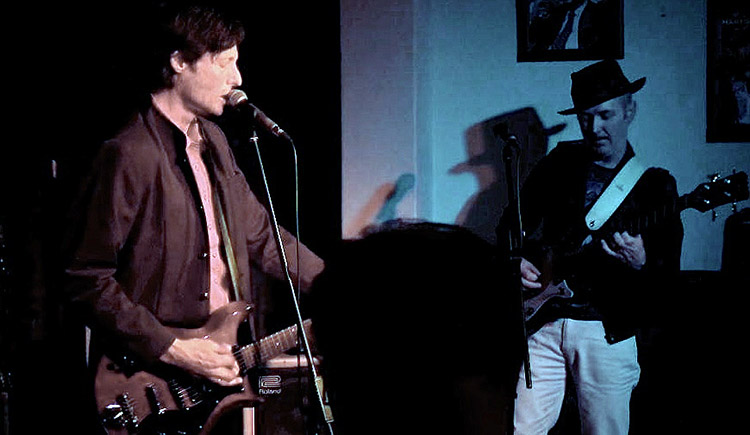 St Morris Sinners and Fair Maiden are both worth tearing yourself away from your gameboy or masterchef, but as the latter take the stage, I'm still in the smoker's open-air lounge, talking to people I've not seen in ages and agreeing to all sorts of improbable propositions while wearing what appeared to be a most undeserving but rather smelly halo. It's the lemonade and the cigarette smoke, the clouds of which take me back to the ghastly days when I was the only non-smoker and non-drinker, I swear, at the Tivoli where, on Saturday nights, a vast grey-white blanket would descend upon the punters beneath, rendering the heads of anyone above six foot four invisible, rather like punters in the mist. So no protests, please, about not performing my reviewer's duty by seeing the support bands, I was busy.

The last time Harry Howard was here in Adelaide he was part of Lydia Lunch's Australia-only touring band, Shotgun Wedding. I recall poking my head backstage (security had fled) and found that there was no-one else back there at all. 'Probably frightened of Lydia,' Harry commented later. 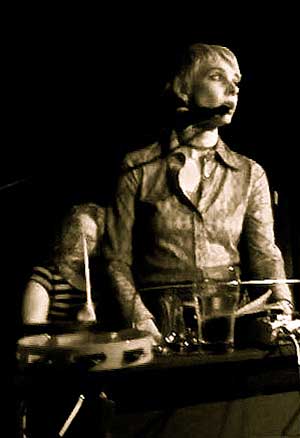 The band take the stage (which Harry describes as 'snug'; Clare Moore's cymbals are crashing perilously close to Edwina Preston's bottom, while bassist Dave Graney (tonight looking rather like the kind of a well-travelled chap you meet at a yachting club). Harry's bit of stage is about two and a half feet by two so if he's not careful he'll be joining us at the front.

I tell you, Dave and Clare are some kinda rhythm section. Dave's bass has a sort of liquid funk aspect, and tonight he's steppin' on it, baby. Clare's always been the kind of drummer you never want to argue with (those wrists could snap your vertebrae rather swiftly) but tonight, despite soundchecking as they play (and selecting the songs as they go, no set list), you can't help but be impressed. Powerhouse ain't in it. There are several long-standing and damn talented musicians of some experience in the crowd all agree - this rhythm section is The Business. If they were session musicians in NYC they could clean up.

Clare and Dave provide the kind of backdrop of sound Harry and Ed need to dominate proceedings; in the flesh, the band are sexy; a kinda salty, scrapy, jaggery, juddery, fists-in-face kinda sexy.

The first few songs have the audience excited and lapping it up. If we saw Harry's band more often we'd be making an unruly mess dancing but tonight we're plugged in to the spectacle. Twigging this, and also realising if they play fast songs all night his voice will rip apart, Harry decides to play their slightly slower songs; 'I won't hear a bad word said about mid-pace songs', he later jokes.

Most of the songs are from Pretty, the new bestseller, with only a few from the first lp as an encore. But the interaction between them, and with us, is a wonderful thing, lifting the usual 'band plays songs to audience' thing into an intimate, personal experience. Dave's in Daveland, rippling away, he's steppin', he's apulsin', he's an on-fire dude. Dave barely looks at Harry and Ed during the songs - he's watching his wife, Clare. Clare watches everyone and everything, but she's so much a part of her kit we can also see her lost in her rhythms, playing hard, eyes closed, hair flying. Beautifully tuff.

At the front we have the double-dose themselves, Harry ('high on a runny nose') apologetic, charming, dangerous and barbed by turns. The audience love him and soak up his charisma as it wells up from a bottomless font. You could say, well, sure, look at his decades of being on a stage... but that's crap. I've seen people who've more or less lived onstage who can be the surliest, piggish characters. Would you get this sort of thing from Ozzy 'don't you know who I am?' Osborne? Alright, I love Harry's 'product', but this is such a special, thrilling kind of gig everyone will remember it for years later with great affection.

But the real spectacle is the bond-cum-high-jump-bar of Ed and Harry. We're right in front of them, we see the looks they give each other behind their backs. There's a huge love there. They bait each other enough onstage that we imagine we're privy to a small sliver of their home life, to the extent we believe their saucepans have dents (those whose handles haven't broken off). Ed, in fact, is mostly in charge of organising which song comes next, bossing the band around like a school-marm.

There comes the moment when Harry introduces the band. DG and HH banter for a while, and we're delightedly hanging on every word. Clare is modestly outraged with her introduction, but when Harry introduces Ed as 'the pointiest member', we're frankly pissing ourselves as Ed and Harry genially threaten each other with great love. Harry's final comment about 'angry vegetable chopping' produces quite extraordinary (but familiar) household images.

Shortly after, as people are howling for more, Ed snaps, 'Right! one more, and then we have to go! We've got a plane to catch'. Harry notices movement in the front row and accurately observes, 'Steady on, Ed, four burly bear-like men just took several steps backward.'

The real kicker about this band is not just the banter, nor the spectacle, nor the music, but the whole thing together makes something else. I honestly can't put my finger on it, but it's like viewing a triptych or diptych, and realising that the extra meanings are running around loose inside your head. If you or I were to play these songs, they'd be robbed of something like nine-tenths of their significance. And, make no mistake, this band are onto something.

The audience loved Harry Howard and the NDE. We loved their music, how they bust a gut getting here and out again, that they appreciated us, that Harry was unconsciously amusing, that both couples love each other and were comfortable showing it to us. All in all, we were drawn into a magical, intimate experience and we simply cannot wait for next time.