Yeah, well, if wishes were fishes we'd all be living in mansions without any servants.

In the same way that the Reverend Horton Heat would fit - but stand out - in a compilation lp of his own influences, the Lime Spiders could provide the killer bonus track on a Nuggets compilation. They really are that steeped in the period. If you know a little of their rather shambolic history it will come as no surprise to discover that their myspace site hasn't been tinkered with in two years and their website, limespidersmusic.com, is no longer operational (and apparently for sale).

You! out there! buy it and give it to them!

Simple. The Lime Spiders are one of those bands who, with a little bit of this and that could be as popular, but considerably more dangerous, than the band they're opening for (again) tonight. A few of us recognise old favourites and smile happily as Mick moves about the stage but the band seem only vaguely familiar to most of the crowd. Mick's type of performance is more measured than the wiggyness of the headliners, but the crowd warm to their laid-back, heads down and do it attitude.

In fact I was reminded forcefully of the night I saw the Loved Ones reunion; they'd only been away twenty years or so but, with the advent of so many musical movements inside 10 years that may as well have been a lifetime ago. Seeing these guys walk back onstage was a little like parting a curtain and peering into something I never saw - and would've loved to. With the Spiders, although I saw them in their purple patch, lurid and abrasive and as utterly un-8ts as you could get, it seemed like the crowd tonight wanted to get it but couldn't 'cause they hadn't been there. Like me with the Loved Ones, a legend they didn't quite understand. Very very strange. 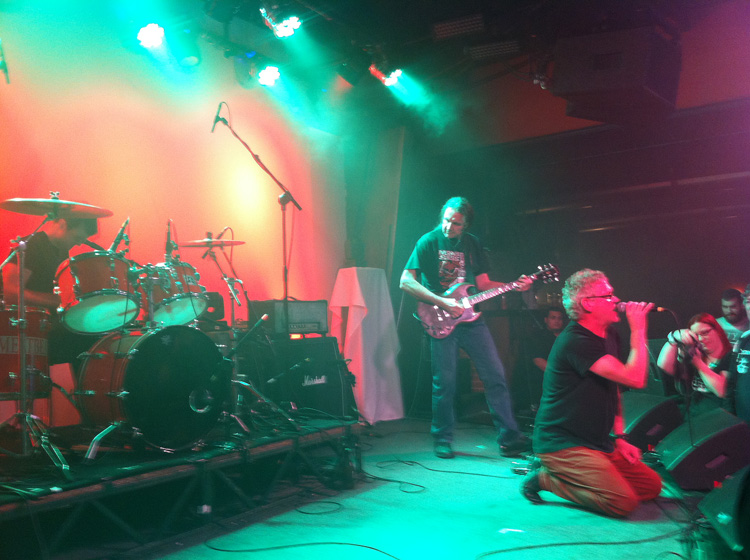 On Their Feet and On Their Knees - Lime Spiders. Robert Brokenmouth photo

Yet you can tell that both bands are friendly, down-to-earth, warm and expressive. They're people. You'd be pleased to meet them and share a beer. Or a cup of herbal tea, a mung bean pancake and a toke of a brownish substance. Unlike a certain gnomic Osborne who's so wrapped up in/ by his stardom he can't afford to be seen talking to ordinary people.

The music played between gives the headliners away, as it is intended to. The Cramps - TV Set. Roxy Music - Virginia Plain. Slade. I was half-expecting Alvin and his warm wet leather glove called Coocachoo to make an appearance. The Spiders are wedged into one crevice, the Hoodoos have the endless summer 7ts to draw on. That's pigeon-holing both quite unfairly, by the way, so maybe I'm exaggerating for effect. Suffice it to say that when the theme from 2001: A Space Odyssey rolls around we've all got big stupid grins all over our pusses.

The headliners come out and are embraced by a crowd who are lovingly familiar with them - not just their music, but these characters. Stalwarts, troopers and you know, woven deeply into the Australian fabric. We know them, we love them, they'll never break up because we need them. And they're hard-working lads, every time we see them they deliver, and Australians admire that.

After seeing them numerous times over the years I thought I knew what to expect.

And yeah, they do do most of Mars Needs as advertised on the poster ... but there are many diversions, chucking in a cracking version of She which Dave describes as a song the Hoodoos played to 'punish' the crowd. But that makes me wonder, did the Scientists do this before them - or independently? Confession: when the Hoodoos first appeared, there was also a huge buzz about the Scientists - who I preferred. Even so, I saw the Gurus many times - they were fun, professional, and their songs were damn good. After all, when the book is written, Dave Faulkner will emerge as one of Australia's most under-rated songwriters. What's In It For Me? and Show Some Emotion, 1000 Miles Away and Crackin' Up all appear tonight, shimmering with emotion and clarity.

I was prepared, in fact, for The Hoodoos to have toned things down, pace themselves, y'know. But they work hard onstage tonight, they push it into us; harder, I think, than they did in their heyday. And they're all the more impressive for that. Dave is a strong, energetic performer, singing with emphatic strength and with a boundless 7ts optimism at his core. Where he gets it I can't tell you.

They're control-freak perfectionists of course, and Dave and Brad's guitars are carried back and forth by tireless, retuning roadies (so much part of the show I'm surprised they're not wearing Jawa costumes), and I lost count of the number of times Dave's favourite Fender creature was carted to and fro. Have you seen it? It looks as if it's been retrieved from two years' living on a coral reef with locals whose names resemble days of the week. Is that a fine layer of salt crust?

But no matter. Dave can release an album whose music is entirely derived from deflating beach toys for all I care, he's Dave Flick Faulkner and the Hoodoo Gurus are alive and well and the record industry should be ashamed of themselves for not making more of them.

A band like the Lime Spiders exude quality, and so do the Gurus. Both have very different approaches yet both can handle festivals, big arenas; yet one happens to be more popular than the other. To me, the popularity is incidental; the Stooges are huge now and us old farts can remember a time when they were a joke, pariahs, and their fans regarded as drooling bums. If it became known you were a Stooges fan you'd get the 'who?' look or, if they knew who you meant, an embarrassed pause followed by an excuse to be elsewhere.

The Gurus come back for two cheerful, brash, fizzing encores, and the second last song, Leilani, was a standout, clawing the walls in epic frenzy as Dave hopped and staggered and cranked and gurned brilliantly. The crowd are happy, the band are happy. We go home happy, sweaty.

As I struggle to get the car out of the too-tiny parking space, I find myself wondering what the result of an album of duets between Mr Blood and Mr Faulkner would sound like? Such extraordinary voices, really. Unexpected covers. Jacques Brel, Francoise Hardy, Walker Brothers, Beatles, Stones, Byrds.

Tonight I was told by Richard, a man who knows about these things, that a groovy radio station has released a list of the hottest songs of the last 20 years.
Indeed.

I squint, discovering its description of itself as 'the world's biggest democracy'. Where is Rowland S. Howard, Spencer P. Jones, Hoodoo Gurus, Barry Adamson, Ed Kuepper, Reverend Horton Heat, Dave Graney, Mick Harvey ..? These and many others are omitted because quality ain't in charge, as it never has been and probably never will be - not in a democracy. One reason why punk came along was to expose the tedious pretenders - who were enormously, democratically popular in their day. Names like Jimmy Saville and Rolf Harris are in the headlines for dubious reasons today, but let no-one forget - the people loved them. Regardless of the current unproven accusations, just take a look at what they were in and to the pop culture of the day. Some of these odious pretenders regularly return, like Europe's summer plagues. Popularity is no guarantee of quality.

Democracy speaks, and having spoken, moves on.