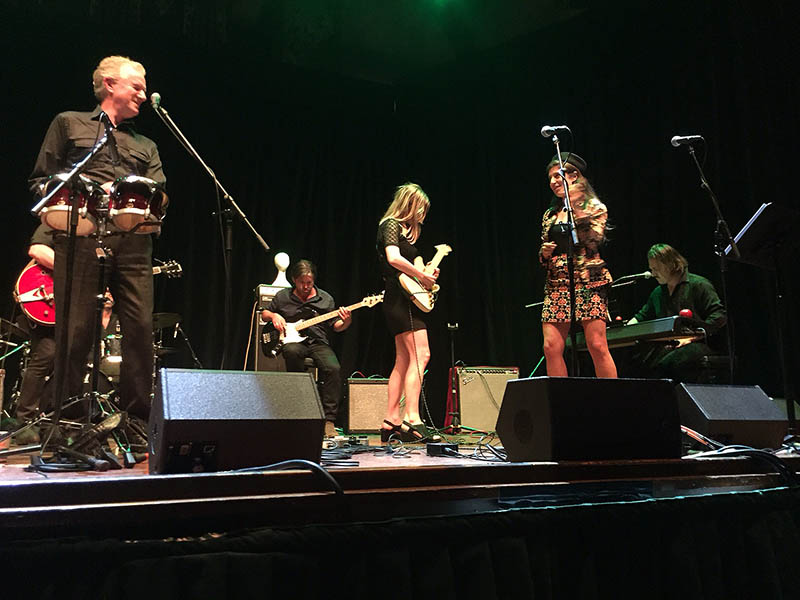 Me? The beginning of every year is the time when every bill imaginable pounces, like flies on poo in the middle of the desert. One minute you're lowering your trews, the next you're waving your arms, defecating, overbalancing and landing awkwardly in ...

I confess to being an admirer of the polymathic Mick Harvey. First saw him in the Boys Next Door, and have seen him in many different configurations since then. He's changed over the years, naturally. One constant is a powerful creative imperative which drives him forward. Because, no, you can't always make money out of music. Sure, Mick has been fortunate, but he's also been busy, and pro-active. But money isn't the compellor, just a factor. The main compulsion is ... to make music. To create.

Some people have pondered why Mick ever did one Serge Gainsbourg LP (never mind four). First, Gainsbourg is essentially unknown in Australian culture. This in itself means that Mick is faced with a daunting challenge - and Mick seems to enjoy challenges. I mean, second, Gainsbourg is an intelligent, clever songwriter, and his songs are often deceptively simple. However, most don't seem to have been translated into English, and sometimes the translation isn't always  so good. French, too, is a punny language, and a language in which meanings can be wrenched around by the way you say the word.

Victor Hugo was a master at this; and if you've seen the film "Amelie" you'll find it similarly riddled with a rich vein of humour. It's worth knowing that Mick translated the lyrics with the help of Lyndelle-Jayne Spruyt - and no, I don't mean thumping the words into Google Translate. Proper translation means considering the options, meanings and possible intentions of the lyricist. Translation is difficult; I mean, people are still squabbling about the meaning of some of Lou Reed's lyrics, and don't get me started on bloody Bob Dylan.

Imagine translating Reed and Dylan for the French. Then there's the Annotated Fall website, which seeks to shed a little clarity of Mark E. Smith's lyrics ...). Translation forces the translator to make decisions. The berk who translated "Les Miserables" for Penguin Books decided to excise large chunks of the book and airdrop them in at the rear as 'appendices' for fuck's sake, rather than in the order Hugo intended - completely misunderstanding Hugo's humour and intelligence and, in doing this, the translator gave the impression that he was smarter than the author. Conventions are not always correct, translation is a lot harder than you think.

Anyway, the French, their culture, we're not talking belly-laughs here, more the kind of thing which makes you smile in recognition, perhaps laugh a little, but the magic is that spark of cognisance... just makes the work that much more smart. Returning to Victor Hugo for a moment, imagine picking up a book and flicking the pages and discovering a chapter title: "On Picking Up a Book and Turning the Pages, Reading the Chapter Headings" ... that's genius.

Anyway, this is, as far as I know, the first time Mick's performed Serge here in Adelaide; in fact, he's played Serge all around the world but here. Maybe it was those bodies in the barrels. Or that atrocity at Adelaide Zoo. Maybe Adelaidians just smell bad.

Anyway, it's festival time, so the audience is eager, the line is long and the joint is quickly jammed. "Where's the bar?" bellowed my photographer, as she dragged me against my will down the ramp, "It's a gig! you can't have a gig without a bar!" I was dragged, gentle reader, down to the front row, where my photographer parked me slap-bang in front of Mr Harvey's mic stand. At that moment I felt rather sorry for him, having to see my ugly mug in front of him. FFS.

But then, I found I could not take my eyes off his bongos. One, I noticed, was rather larger than the other.

Alright, settle down. Cue filthy Sid James laughter, cries of "Ooo! You mustn't!" and so on.

Now then. What is first and foremost evident is the very great pleasure Mick has in recreating such fabulous songs for us, and realising them. The sound problems marred things a bit for him, I think, and perhaps the band weren't as tight as he may have liked. But they were so, so good, girls and boys... 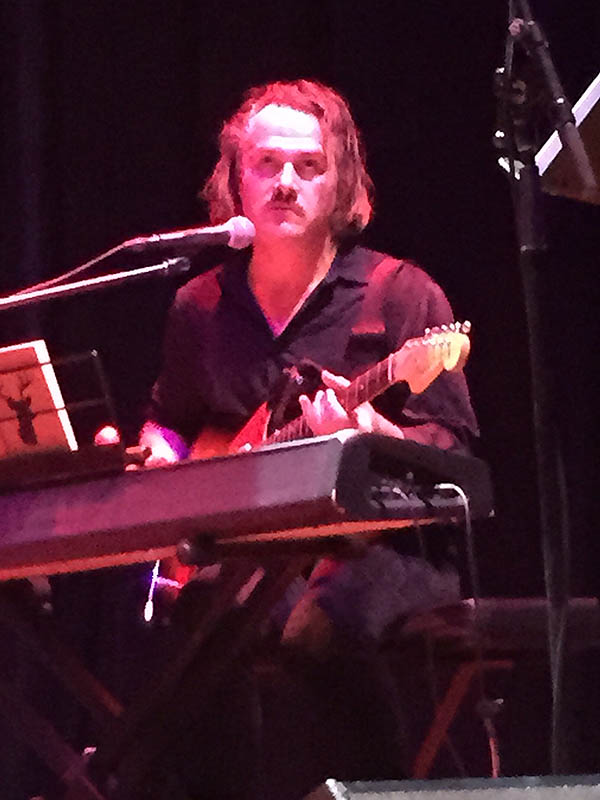 So. We have J.P. Shilo on keys and guitar, Dan Luscombe on keys, Glenn Lewis on bass, and Hugo Cran on the drums. We had vocalist Sophia Brous, and guitarist-vocalist Xanthe Waite. On the violins (I apologise for not knowing their surnames) were Robyn, Naomi, Karen and Bron. Every musician on that stage was just perfectly sharp. Mick may disagree, of course, but he's quite the perfectionist. I'm not. I look for meaning, resonance, strength, balance or otherwise. Apart from the violinists, you can check out everyone's bona fides. You'll find them impressive. In the flesh, the songs had a feel and texture of their own; a deep, primal thing, and something else you rarely see on a musician's stage these days: playfulness.

There was a certain amount of line-up changes to suit the songs, with Mick at one point remarking that we were stuck again with us "gnarly old guys". Which brought a titter of recognition.

While I am very tempted to run through the set list (which I pinched) with you; instead, I shall provide a link where you can purchase the CDs. 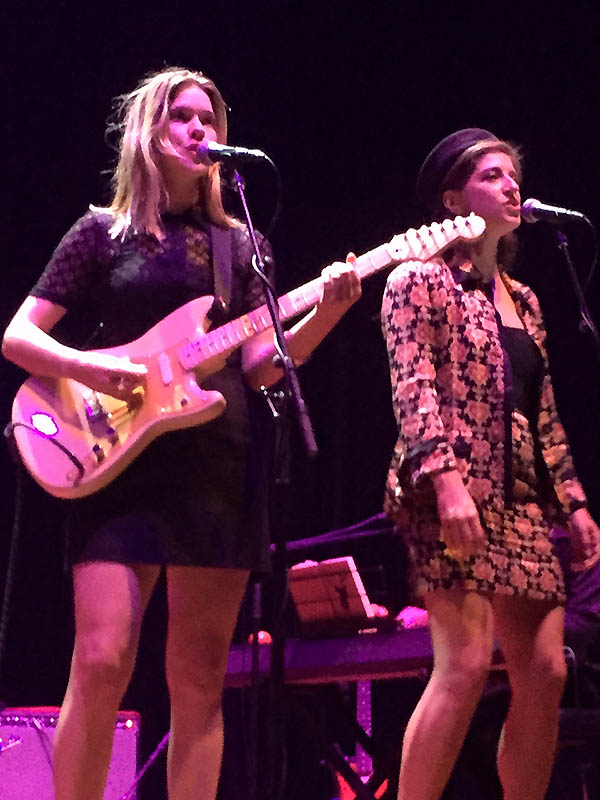 Live, this show drips power, wit, subtlety and louche abandon. Mick's hands must have given him the bloody what-for the next day, he really walloped those bongos. Gainsbrough's songs veer from forceful almost-rock to playful TV jingly things to some sort of opium-den lounge, all the while with the mischievous spirit of Serge smirking slightly before heading to a beach with a lush and comely wench, cigar in one hand, swollen brandy balloon in the other...

Or something like that. I'll say two more things and then I'm done for the night. First, the ... presence ... of Shilo, to one side of the stage, lent an unobtrusive weight and strength to the proceedings. He is so focussed, so completely in-tune with the songs (and with Mick, it must be said) that there is an air of magick about him. Uncanny.

And second, it did occur to me that some of the Bad Seeds' arrangements (which Mick Harvey had a hand in) owe a certain something to Serge, or Mick's perception of Serge. I'm sure there's more to it, but ... from the stage tonight came a distinct, powerful, solid, inarguable 'whump' which I only used to encounter with the Bad Seeds. I can't really explain it any better than that, but it has little to do with volume and everything to do with cohesion and spirit but it's late and I'm tired and thirsty and so...

If you have the chance to see this outfit, see them. If you don't, contact Mick and bring them to your town. Unless the mayor's a bogan, or Fraser Anning, you'll be shining the light of culture on your burg.

I do hope there's a DVD or a live recording in the pipeline.