First up was Churchwood. Bill Anderson formerly of Poison 13 and Joe Doerr of The Leroi Brothers are members of the band. They were both previously in a band together called Hand of Glory. The music that Churchwood plays is Aggressive Rhythm & Blues. They swung hard.

Next, was B.P. Fallon, legendary publicist to the stars turned musician. His set consisted of songs that were sing/speak with spoken passages in between. His backing band included Danny B. Harvey, Clem Burke, and others. At one point, Joe "King" Carrasco sat in with them.

Clem Burke played with just a snare drum and a conga type of drum. He used sticks and brushes. At one point, he used a scarf to deaden the snare. Which I thought was a novel approach.

They finished his set with a rousing version of “Gloria”. This was prefaced by a remembrance  of Them from the 1960s.

Later, I spoke with Mr. Fallon. I'd read that he had been Johnny Thunders' manager at one time. I asked him if this was true. He replied: "Yes, in 1978". He continued to say: "We put together the best album that he ever made".

Javier came on stage with musicians who included Hector Munoz on drums, Cornbread on bass guitar, and Brad Rice on guitar.

He started with "Under the Stars", which is a personal favorite of mine from his "City Lights" album. After the first two songs, he played 3 songs that I wasn't familiar with.

Javier can put together a song. His songs have good song structure that are, at once, dynamic and melodic.

From the stage, Javier mentioned that he would begin recording his next album in Austin the following Sunday.

Of special note, the majority of the songs that he played were from his "City Lights" release. But, there was a Zero song ("Wimp"), which he introduced by saying: "This song comes from a time when I wore a younger man's clothes". There was also a cover of The Standells song "Sometimes good guys don't wear white". He also played "Gypsy Son" from the Chariot album "I am Ben Hur" on Munster Records.

It was great to hear Javier call out "Go!" before the band launched into "You ain't gonna bring me down".

They finished with a hard driving version of "Keep on Tryin'".

This show was certainly one of the highlights of my trip to Austin for South by Southwest. It was an exceptional evening.

Javier Escovedo latest release "City Lights" on Vinyl LP is available from Folc Records in Europe and Get Hip in the USA. 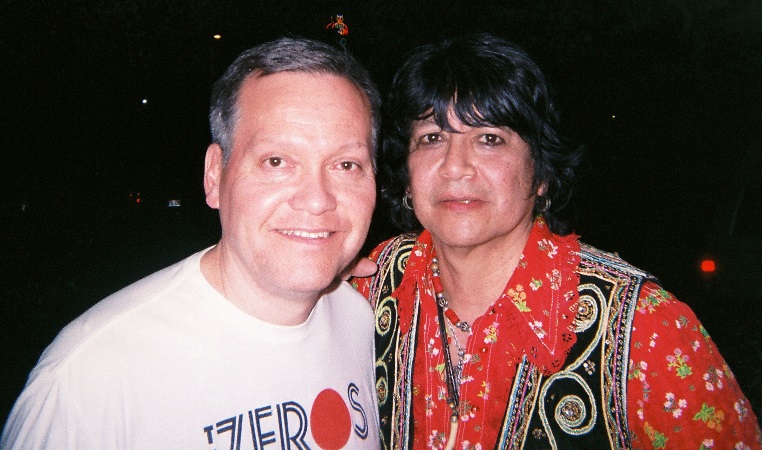