Written by Robert Brokenmouth on 11 October 2016. 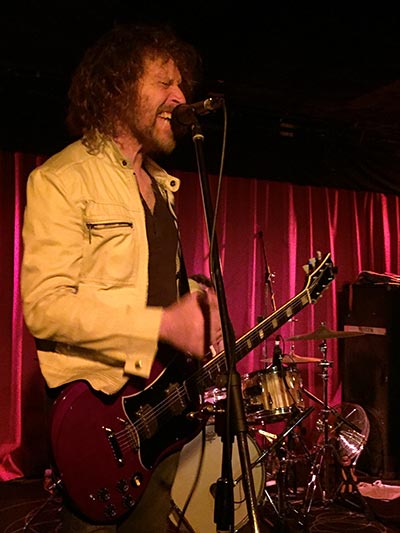 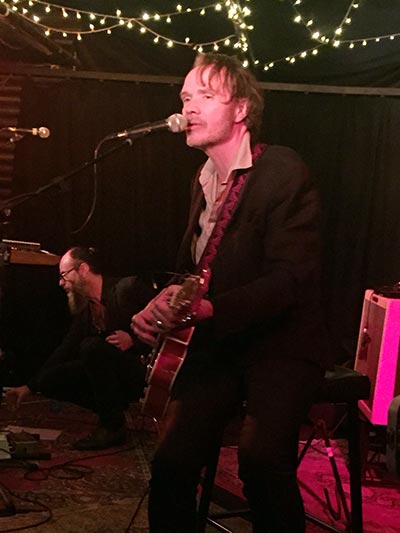 I confess I’m a latecomer to Hugo Race; even though I bought his first True Spirit LP, I was never able to follow up on seeing him live until a few years ago. Since then I've seen Race about five times since witnessing him deliver a riveting, magical solo set which had me transfixed. The second time was when Sacri Cuori opened for him, then Hugo joined them for his own songs afterwards. Another magical evening. And somehow, he’s killed it every time I’ve seen him.

The thing with Hugo - and with Kim, now I come to think of it - is that they are forever developing, heading off into new directions. This seems to fly in the face of what we’re always told bands should do - play the hits, the familiar stuff.

Does anyone else remember The Models catching a bollocking from Molly on C-down for “not playing their hits”? Bands we thought long-dead and buried have been pouring out of retirement (villages) to play their hits. Suzi Quatro is heading over again. Cold Chisel have packed out the Ent Cent. Hunnas will play after Adelaide’s noisy car race. The Troggs are here in November. And I’m sure the Hoodoo Gurus will be sighted again soon, too.

Nothing wrong with a scamper down memory lane, of course. But some bands and performers, you have to have your receptors blank, otherwise you may simply not catch what they’re up to - a performer’s shifting perspective, even when they’re creating serious quality, may not always find favour.

This isn’t about playing “new” songs against “old”, but both Hugo and Kim are always delving into areas they haven’t yet tackled. Essentially, they’re not so much reinventing themselves or their sound, but … progressing. Moving forward. Dedicated. Passionate.

Have you ever wondered what kind of individual does this? Performing like this, writing songs, as a career, with no overwhelming tv or radio coverage, no mainstream media onside? Okay, we don’t begrudge the Farnseys or the Minogues of the world (no, I don’t) their position because that game is a hard, stressful one. And few could do it and pull it off.

Equally, though, the game is hard for those a few rungs down - let’s not beat about the bush, Salmon and Race are living legends who sow their own field with grain just as tasty and desirable as any other. I’ve seen 20-somethings squeal at the Living End that they’re “legends”, and doubtless those slumped in the burbs in front of the gogglebox believe that Guy Sebastian is equally legendary. 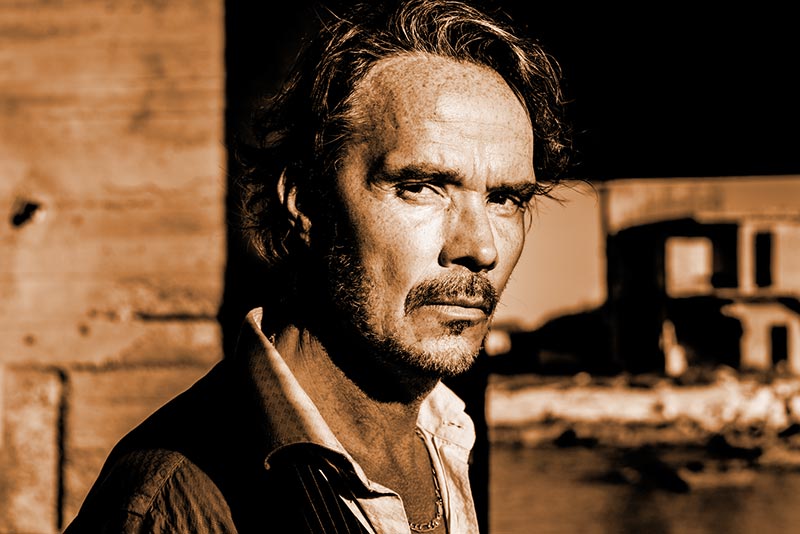 Tonight, Hugo and Michelangelo Russo played two sets - one, Hugo’s own material, the second, John Lee Hooker inspired ... it's a damn fine night. Most of the first set is culled from his new album, “24 Hours to Nowhere” (review to follow), mixed in with a few favourites from his last few LPs.

Hugo plays guitar with a glorious rich tone, sings in that hotsandpapery voice, is careful to get his phrasing precisely right, to express what he wants to express. Russo’s colour and movement from the keyboard and pedals is like a classic western film score by one of those cult directors who move you, over and over, to tears (which is why they never end up directing stuff like “Mission Impossible 32” or “Forest Guppy”). Between them, the result is understated yet sumptuous, powerful, internally moving.

Of course, if I’d gone tonight expecting the Hugo with Sacri Cuori of a few years back, I’d be in for a surprise, and I might not get it. For example, Hugo seems to use a cover song as a springboard to bring us into his own world, his own perspective, making John Lee Hooker his own, expanding and developing hints from the originals.

Hugo’s interpretations of Hooker are damn powerful, and tonight they’re first, indelibly linked to the ’24 Hours to Nowhere’ story, and second, to that mythology of the Detroit factory-hand who played guitar like a modern troubadour. This set seems to be a preview of a new LP - they’ve recorded it, it needs to be mixed and then set in motion.

Another similarity between Kim and Hugo is that they both straddle the same fence of scientist and romantic, albeit from different perspectives. Russo is, of course, part of the science equation - Race’s foot-drum is, in context, also an integral part of this. Kim came on for his first set wearing a lab coat - a deadpan joke, of course - but those of us old and shabby enough to remember, recall that the first incarnation of The Scientists were relentlessly romantic. Hugo’s love songs - and his interpretations (JLH’s “Decoration Day” was especially moving) - have matured, like Kim’s, and the longer these two survivors continue, the better their songs seem to get, the more the complexities haunt us.

Many bands, however, have one or two difficulties with their old material. Perhaps they’re linked to individual musicians at the time they were written. Perhaps their circumstances. Perhaps they just want to move on.

Hugo has looked at his own earlier material, he knows there’s interest out there. But his back catalogue’does not have the same international breadth of interest and influence as Kim’s. So when Hugo does return to his older material, he can look at it with a fresh ear and tweak it so that it naturally slides into place with what he’s doing now. (Dave Graney has that rather wonderful facility as well).

The likes of Henry Rollins once described Kim as a gem or national treasure or somesuch, but the truth is, both Kim Salmon and Hugo Race are making the kind of records which, thirty years ago, would be leaping up the charts and lodging in our dna.

Of course, we live in a time when the industry takes the view that the more pink hot pants, zany hair and sleeve tattoos and naked flesh the camera sees (and all the other ornamentatory narcissistic nonsense), the more people will open their wallets because hell, that’s what rock and roll is all about.

It’s my job to remind you that no, that’s not what rock’n’roll is about. R’n’r is the ultimate art-form, where the only rule is that there are no rules save the exceptions, a kind of emotive folk-literature accessible by all to all. Whether consciously or no, Hugo and Kim both inhabit this terrain.

Kim’s first set sees him - just a man and his guitar - revisiting his earlier period, from The Cheap Nasties to the end of the Scientists as a working, developing group. He brings a wealth of perspective to the presentation by having the guts and the smarts to intersperse the songs with short vignettes about each song’s origin. For example, I had no idea that “Shine” was autobiographical, nor that Kim used to play some rough joint where sailors would pick up the prozzies, and he’d do three sets each night for weeks at a time. That’d make you pretty damned proficient. Certainly make sure you got professional in a hurry. This was, I gathered, before ‘punk hit’.

Another similarity is that Kim and Hugo are both great, great storytellers.

The second set sees the return of Pete ‘The Stud’ Howlett and Shakey McGee on bass and drums, and they’re way tight, in synch. Kim is smiling, the band are all smiles, there’s a real sense of joy and camaraderie on the stage, which is wonderful. The set comes from the new My Script lp and a hearty smattering across Kim’s back catalogue - including the Scientists.

See, it’s not just the “My Script” album he’s touring on, but the Scientists box set (review to follow) as well. For many years, Kim seemed unable to gain perspective on the Scientists, so important to so many for so many reasons, but … when, as he said recently, he saw Gareth Liddiard of the Drones covering him… things seemed a little easier.

Pete normally plays guitar in The Pro-Tools, and he’s a cheerful, extremely talented chap who belongs on the big stages around the world. Shakey McGee is so animated behind the kit, responsive and cheerful, it gives punters someone else to look at other than some grumpy sod staring at the kit and concentrating. Seeing her last night was a real treat - and she’d be a huge asset to any live band.

Tonight, Kim is loved by the crowd, not because it’s Kim Salmon, but for much the same reason Hugo is loved by his fans. What they do comes from the heart; if Hugo and Kim are professionals who always turn up and play with the same power and self-belief regardless of how many people are there, they’re also always genuinely pleased (and even slightly disbelieving) that people are so appreciative of their music and stories.

There are very good reasons why Hugo and Kim are so beloved by their audience - and it’s a million miles from people fulfilling their own audience’s expectations in the arenas and tv studios.

It’s fitting that Kim’s last song is “We Had Love”, in which he was able to improvise - Shakey and Pete were perfect. They had his back.

Kim Salmon plays the last gig of his (second) “My Script” tour at the Grandview in Fairfield, Melbourne, on October 15, which is a good place to get Kim’s albums while you can. They’re selling out. Pester him on his Facebook page if you can’t get there.